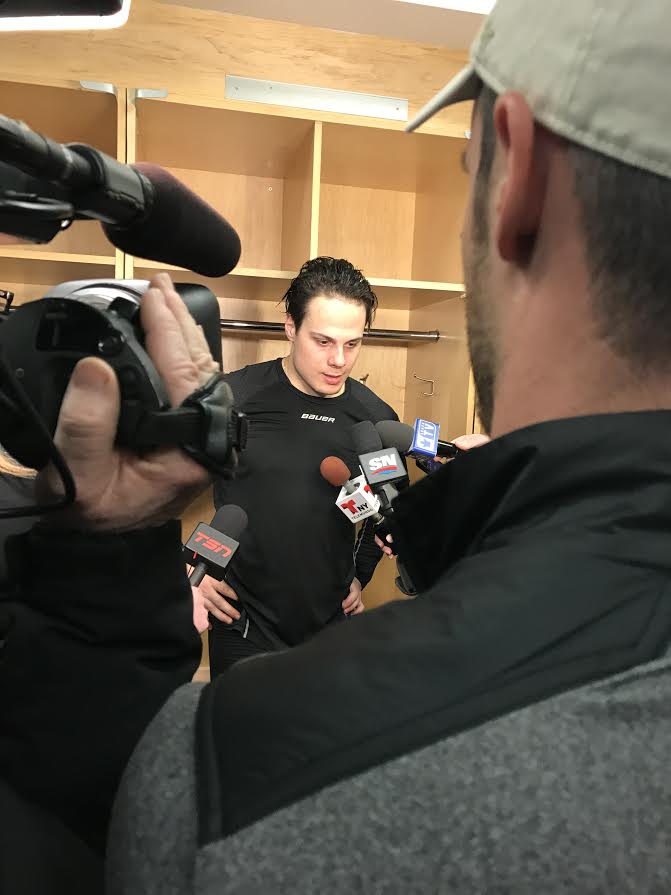 NEWARK–Even the worst memory on the Maple Leafs could recall the last time they visited Prudential Center. The Nov. 23 pre-American Thanksgiving game saw Toronto score three goals in the first just before allowing three in the second in a night where they surrendered two deficits before losing 5-4 in a shootout. On Friday versus the Devils they added a fourth first period goal for good measure.

On a night where New Jersey unveiled its Ring of Honor, inducting its late owner Dr. John McMullen, the man responsible for bringing professional hockey to the Garden State, the team fell to Toronto 4-2.

After killing off a Devils power play early in the first period, the Maple Leafs found themselves on the man-advantage at the near halfway mark of the period. A Nazem Kadri power play goal at 13:17 helped start off a bountiful-in-goals period for Toronto.

With another special teams chance to even things up in the opening frame, Cory Schneider’s mishandle of the puck in front of the net resulted in a Connor Brown shorthanded goal at 13:17. Then, the Leafs starting pouring it on. Auston Matthews’ power play tally less than a minute later was followed by a 15:15 Tyler Bozak goal on newly-replaced goaltender Keith Kinkaid put an early coffin onto the ice for the Devils.

Schneider was pulled for the first time this season during the first period of Friday’s contest, allowing three goals on five shots. With the game comfortably in hand though, Kinkaid didn’t face much work.

It didn’t take long to beat Kinkaid, as Toronto added a fourth goal from Tyler Bozak before the period ended. It would be all they needed though for the balance of the game and it showed. The Maple Leafs were held to a season-low 14 shots on goal, including nearly a period and a half without a shot.

New Jersey was able to capitalize on Toronto’s loose play in the third period scoring twice in the final five minutes including their first power play goal in four games thanks to former Maple Leaf, P.A. Parenteau at 16:36.

Jon Merrill would add his own at 17:31 to give the fans that stayed some life, but the tally was little too late for the Devils, who fired 32 shots at Leafs’ netminder Frederik Andersen in the loss.

Captain Andy Greene did not play on Friday due to injury, ending his 350-game streak for consecutive games played. His status for Saturday night’s game against the Oilers remains unclear, according to head coach John Hynes.

So too does the decision on who will start the Devils second game in as many nights. Schneider played just 9:13 before being pulled.

The Devils will have a quick turnaround, hosting the Connor McDavid and the Oilers on Saturday. The game will be a homecoming for Adam Larsson, who was dealt for Taylor Hall in the offseason. Hall, who was the club’s first overall pick in 2010, registered 328 points in 384 games with Edmonton.