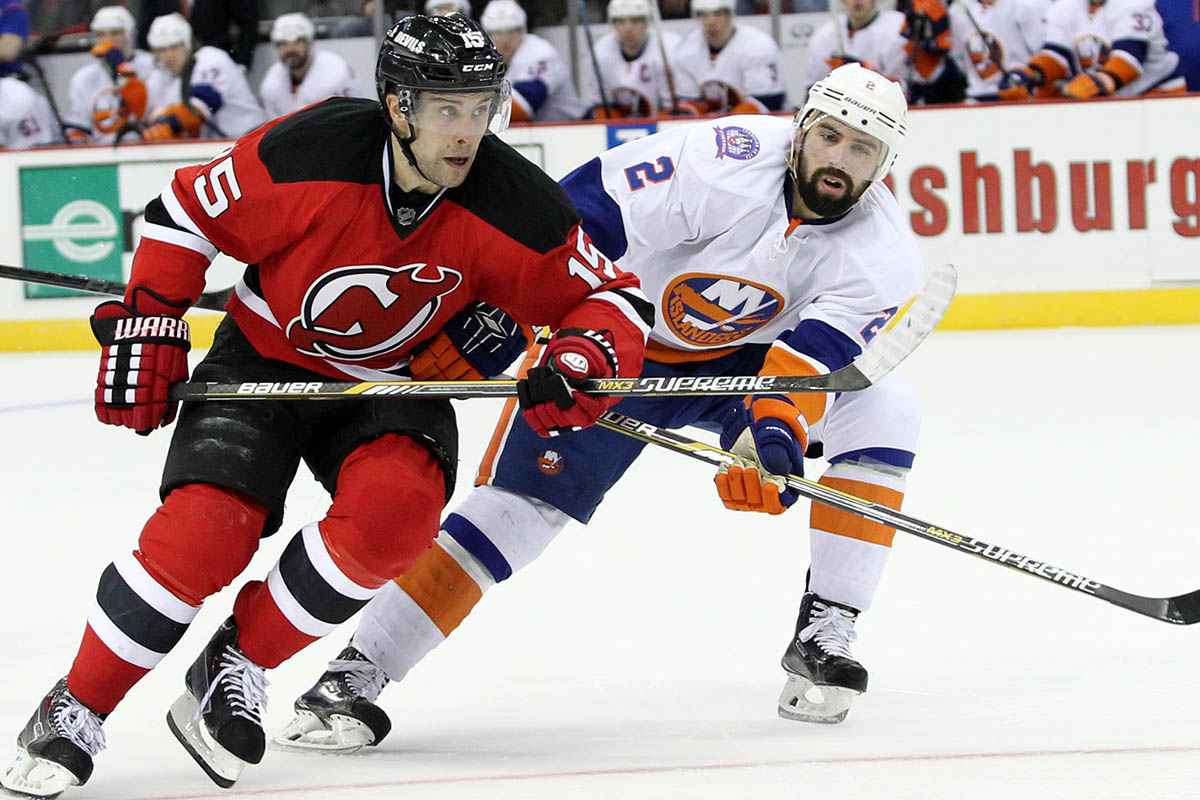 Devils Will Look to their Future on Saturday

The Devils announced several transactions on Friday and many of which will impact the team’s lineup in Saturday’s season finale versus the Maple Leafs.

New Jersey Executive Vice President/General Manager Ray Shero announced the recall of 2015 first-round pick, Pavel Zacha from Sarnia of the Ontario Hockey League. Zacha, whose Sarnia Sting team was eliminated in the OHL playoffs by the Sault Ste. Marie Greyhounds in seven games on Tuesday tallied 64 points in 51 games this season and added 13 points in seven playoff games. Zacha signed with the Devils in the off-season and skated in pre-season games, but was assigned to juniors before the start of the season. Zacha will make his NHL debut on Saturday at home.

Wood, a 2013 fourth round pick by New Jersey, completed his freshman season for Boston College following Thursday’s 3-2 loss to Quinnipiac in the NCAA semifinals. He recorded 35 points in 37 games this season. Wood’s three-year entry-level contract begins in 2015-16 according to the official release.

Santini, a 2013 second round pick by the Devils, played the last three seasons for Boston College. In 98 collegiate games, he recorded 35 points. He finished his junior season with a career-high 18 points and was named Hockey East’s Best Defensive Defenseman. His three-year entry-level contract will also begin in the 2015-16 season.

Both Wood and Santini are expected to be in the Devils lineup on Saturday, making their NHL debuts.

Joshua Jacobs, who split the last two seasons between Michigan State and alongside Zacha in Sarnia, agreed to a three-year entry-level contract that will begin in 2016-17. He also signed an amateur try-out with Albany, the Devils minor league affiliate who have five games remaining in their season.

Zacha, Wood, and Santini are all expected to join Jacobs in Albany following the conclusion of the Devils regular season.

The team also announced forwards, Mike Sislo and Blake Pietila and defenseman Vojtech Mozik have been assigned to Albany.

Even if it’s just one game, the three fresh faces should offer a glimpse into the future of the organization. All three will likely return in September to compete for a spot in training camp.

Zacha centered the Devils’ top line of Patrik Elias and Devante Smith-Pelly at Saturday morning’s practice. Zacha, who grew up idolizing fellow Czech and now teammate, Elias, could have a special opportunity to play alongside him for perhaps the only time.

Elias, 39, has indicated he hopes this abbreviated season for him is not his last. Cut short due to knee surgery, Elias still wants to play NHL hockey. He is without a contract for 2016-17 and said he won’t make a decision one way or the other immediately. In 1,239 NHL games (all with the Devils), he has 1,022 career points (407g-615a).

Some might wonder if Saturday could also be the final NHL game for Tuomo Ruutu. The Finnish forward who joined the Devils in 2014, is just 33 years old but his play has dipped considerably in the last three seasons, scoring 37 points in his last 185 games. He too is without a contract for 2016-17 and could pursue international options if the free agent market is stale.

Others with expiring contracts and headed to unrestricted free agency include Bobby Farnham, Stephen Gionta, Tyler Kennedy, David Schlemko and Jordin Tootoo (out for the remainder of the season with injury).

Joseph Blandisi and Reid Boucher have been confirmed healthy scratches for Saturday. Blandisi finishes his first NHL stint with 17 points (5g-12a) in 41 games. Boucher finishes with  19 (8g-11a) in 39 games. Both will likely be headed for Albany at the conclusion of Saturday’s game.

Adam Henrique and Kyle Palmieri will both play for the Devils on Saturday. Henrique has 28 goals this season; Palmieri has 29. Both will be looking for a chance to get a nice round number to their final stats total, which could mean an offensive onslaught–one that hasn’t been seen since St. Patrick’s Day. No Devil has scored 30 in a regular season since 2011-12 when Ilya Kovacluk (37), Zach Parise (31) and David Clarkson (30) all reached the marker.

Even if nobody will admit it, the game has some implications for Toronto, who could seal up 30th place in the NHL with a loss. The implications of which could mean a shot at the first overall pick at the 2016 NHL Entry Draft in Buffalo. The results will be announced on April 30.