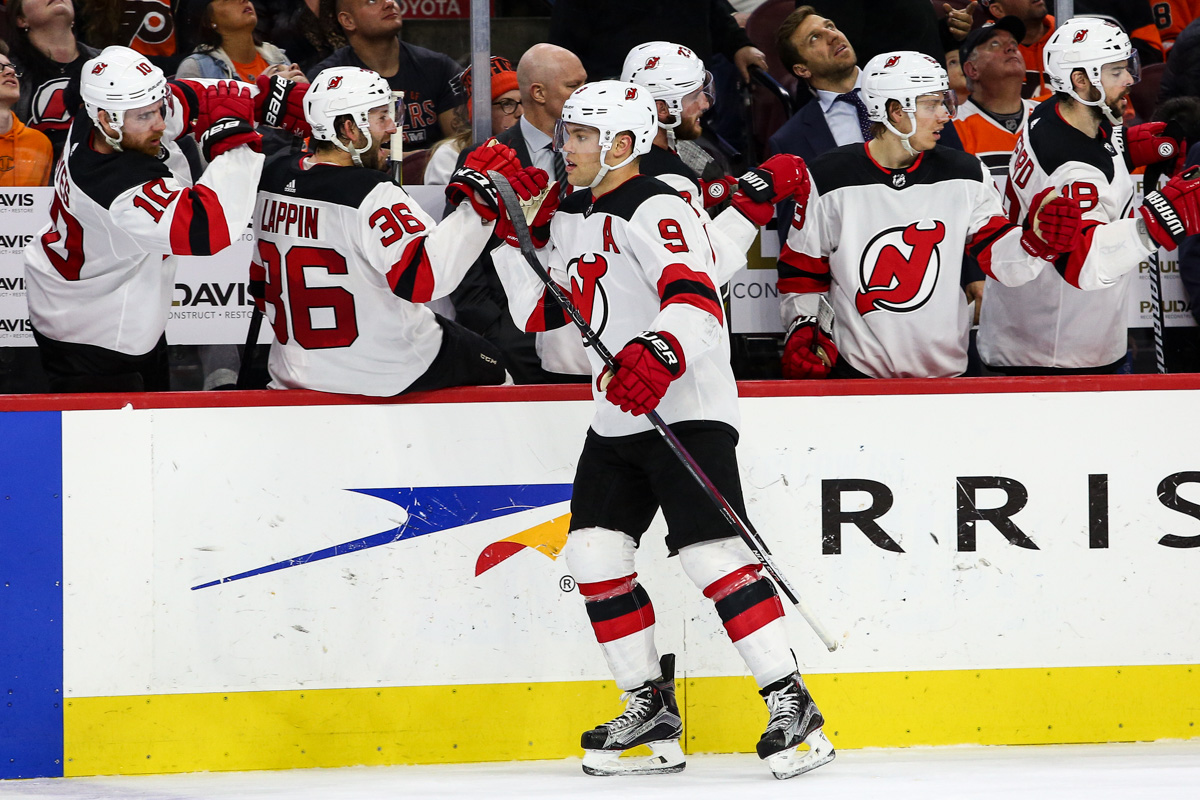 But whatever it was, that held up a deal this weekend, when it felt like a deal was inevitable, by the time the team got back to New Jersey on Monday, enough traction was made to send Hall back to the Desert. The same place where he was a healthy scratch on Saturday, the team again citing precautionary reasons, before his now-former team skated off with a rare victory, beating the division-leading Coyotes, 2-1. Hall is now part of that pack.

The Haul for Hall…

In exchange for Hall and minor league forward, Blake Speers, the Devils acquired prospects, Kevin Bahl, Nick Merkley and Nate Schnarr. New Jersey will also acquire Arizona’s 2020 first round pick and a conditional pick in 2021. The first round pick is contingent on the draft lottery heroics of Hall coming up short for once after overseeing five lottery wins in his career including being the Oilers first overall pick in 2010. If that pick ends up in the top-three, it will transfer to 2021. The Devils also acquired a conditional pick for 2021 that is guaranteed to be at least a third round selection, but could become higher depending on several outcomes including a playoff round victory combined with Hall extending in Glendale leading to an additional first round pick.

Though GM Ray Shero and Darren Ferris, the agent for Hall, maintained regular dialogue as previously as a month ago, it became clear that it was unlikely the winger was going to sign an extension in-season, if at all, with the Devils. And, with the season off to a miserable 10-17-5 start–30th in the league–there was no longer any benefit to hanging onto the only person in the franchise’s history to win the Hart, voted the league’s most valuable player for 2017-18.

The Coyotes currently lead the Pacific Division with 42 points in 35 games. The Devils sit last in the Metro, five points behind seventh-place Columbus. That should explain why John Chayka’s return consists of an immediate high-talented impact player and New Jersey’s is entirely future.

Bahl, 19, is a six-foot-seven inch defenseman, is in the midst of his fourth season of junior hockey with the Ottawa 67’s of the Ontario Hockey League. He’s presently partaking in Canada’s U-20 World Junior Championships camp. Unlike prospect, Ty Smith, he’s not a lock to make the team, but has put together a strong season this year scoring 20 points in 28 games.

Both Merkley and Schnarr are young forwards–both under the age of 23 and playing in the American Hockey League. Merkley, a former first round pick in 2015, is in his third season of pro hockey. Injuries have prevented him from playing a full season, though he’s produced 89 points in 109 games.

Schnarr, is in his first AHL season. In 22 games, he’s netted 9 points and is coming off a year in which he scored 34 goals in 65 games with the Guelph Storm, tied for third in the OHL in assists (68) and tied for sixth in points (102).

The additional pick in the 2020 NHL Entry Draft means the Devils will have two picks in the first round for the first time since 1998 when they selected Mike Van Ryan with the 26th overall pick and traded up to pick Scott Gomez one pick later.

The 2021 conditional pick, initially a third, can become a second rounder if the Coyotes win a playoff round or Hall decides to re-up in Arizona. If both occur, the Coyotes will hand New Jersey their top pick in 2021 as well. This being the production of quantity now–quality at a time, TBD.

Hall on a conference call said he was excited to join a team that instantly puts him ahead in the standings and that the five postseason games he experienced in 2018 was the “highlight of my career.” To date, those are the only five games the left wing knows, which likely explains why any kind of decision on his future without the proven results was going to be a tough sell for Shero. Still, the franchise’s only Hart Trophy winner says he’ll remember his time fondly.

“After my career is done, when I’m 65 years old, I’ll still remember NJ Devils fans chanting ‘MVP’ for me. I have a lot to thank Devils fans and the organization for.”

Though the fanbase has experienced heartbreak on numerous occasions with the likes of Scott Niedermayer and Zach Parise departing for lucrative contracts elsewhere and saw Ilya Kovalchuk depart the league just three seasons into a 15-year contract, this tale of star player exiting the Garden State is decidedly different. The Devils had the wherewithal to obtain assets, albeit unproven at the NHL level ones, before it was too late. And though it feels like a small victory to a team with little to celebrate as it is, it’s something.

The Next Shoe to Drop

Though the Devils did manage an impressive victory over the Coyotes on Saturday, absent Hall, it seems only logical to assume, that the team that struggled with him in the lineup to score goals and win games, should struggle even more to do just that. With less than a month left in 2019, it seems like the season’s lede and narrative is already written.

That might mean another date with fate as the 2020 Draft Lottery approaches with the like Alexis Lafreniere and Quinton Byfield highlighting the coveted pieces that could fall their way.

It’s hard to imagine Shero and company not being open to nearly anything that isn’t Nico Hischier or Jack Hughes. Might the only remaining pieces from the 2012 run to the Final be in play? Captain Andy Greene is a pending UFA and Travis Zajac has one more year left under contract but could help a team solidify its third line.

Sami Vatanen is also a pending free agent and could fetch a nice return for a club that is without their own second round pick for each of the next two years. The Devils have over $9 million in cap space, according to CapFriendly, which could prompt them to take on a bad contract in exchange for re-couping some picks.

It seems unlikely that big offseason-get, P.K. Subban, who has just five points this season and is owed $9 million for this season and two more after, is truly on the move. In part, because his play has relegated his market to non-existent.

If his game starts to click then things could change. Even then, it’s a lot of money for a mostly cap-strapped league. Also, the Devils would probably like to have one of the game’s most popular and truly fun figures hanging around to help sell a team without a lot of that presently.