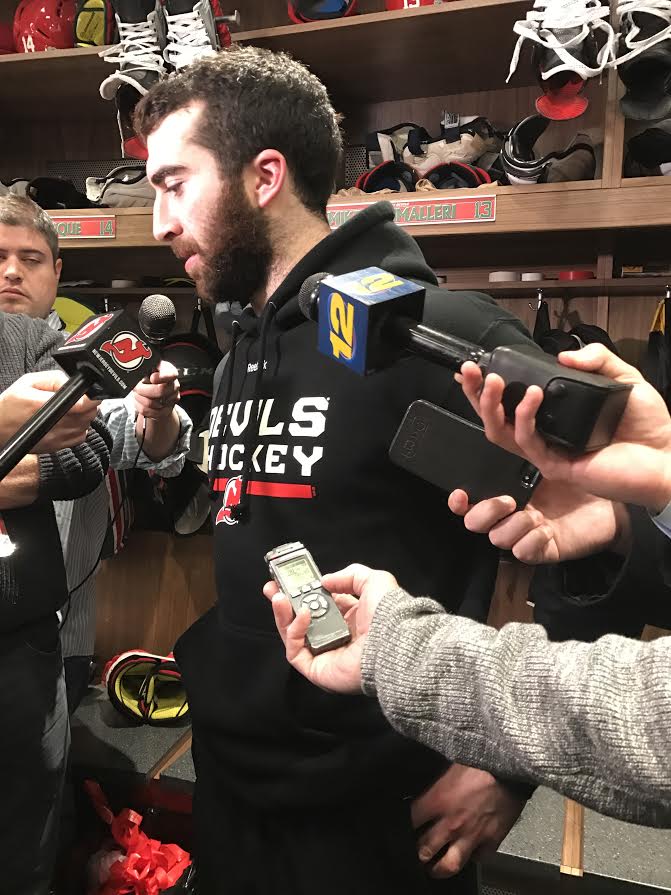 Palmieri, speaks with reporters following the Devils 5-2 loss to the Capitals.

For the second time in as many games, the Devils were forced to make a mid-game goaltending change, as Keith Kinkaid allowed four goals on 17 shots in a 5-2 loss to the Capitals on Thursday.

Washington opened the scoring 6:14 into the first period when who else but Alex Ovechkin stripped the puck from Kyle Quincey and scored perfect backhand shot that beat Kinkaid for the early 1-0 tally. Looking to respond, the Devils registered consecutive chances but were denied by Caps’ nteminder, Braden Holtby.

Whatever momentum was gained from those chances evaporated in a hurry when Kyle Palmieri took a high-sticking penalty at 17:37 of the first. The Caps scored 41 seconds later on a curl-and-drag move from Andre Burakovsky to make it a 2-0 game. Both first period goals were unassisted.

Trailing again after one, the newest Devil scored 3:19 into the second period. Stefan Noesen’s third of the season came a day after he was claimed off waivers by New Jersey from Anaheim.

But as was the case for much of the night, each step the Devils took forward was countered with two steps back at the hands of the Capitals. Goals from Lars Eller at 8:29 and Evgeny Kuznetsov on the power play at 10:19 chased Kinkaid from the crease. Just two nights after he was pulled, Cory Schneider found himself in net, down by three goals.

Adam Henrique’s deflection off a Mike Cammalleri point shot would give New Jersey some life in the final minutes of the third while on the power play, but the offense was again hard to come by.

The Devils pressed early in the third and created their share of scoring opportunities, but struggled to find the back of the net. New Jersey opted for the extra attacker with more than three minutes remaining, resulting in an 18:07 empty-net goal and his second of the night for Kuznetsov to ice the game.

“Obviously, we’re not where we want to be,” Schneider said following his relief effort in net. “We just have to keep grinding and just get better. We have to play better and win games. It’s going to be a tough task, but hopefully we can come together as a group after the break and string some together at home.”

Kyle Palmieri didn’t register on either of the Devils’ goals, but had an active night recording four shots on goal. He also stood up to Brooks Orpik after his hard, but clean hit on Taylor Hall in the third period, resulting in 17 minutes in penalties.

“Just a reaction, sticking up for your teammate,” he said. “Wish I could have been out there to try and help a comeback. It is what it is.

Palmieri, like most of the Devils reiterated the importance of using the All-Star break which goes from Friday until Tuesday as a chance to re-set.

“I think right now we just got to take a step away. We have a couple days to re-group and have a couple games before the next break. We just have to start stringing some together and make ourselves a push.”

Head coach John Hynes noted that despite his teams momentum gained at times, it was answered at almost every step of the way.

“When you look at the start of the game, I thought we had a great first period and great opportunities yet we’re down 2-0,” Hynes said. “Unfortunately when we had those situations we weren’t able to capitalize on the momentum and good play we’ve had.”

He did praise the team for its efforts on fore-checking, an element though that needs to improve.

“I thought tonight was one of the situations when we were better on pucks in the offensive zone,” he said. “We had some times where we spent more time than the past there. That’s one area we have to continue to get better at.

“We have to be a much harder team in the offensive zone with pucks–spending time there, getting to the net, getting net-front traffic, getting our shots through.”

Those areas and more are ones Hynes hopes the team will improve on ahead of their first of two breaks in the coming weeks, with their bye week coming not long after.

“It’d be nice to have some guys come back rested, ready to go and then next week we got some big games we have to be prepared to win.”

The Devils, who have now lost six at home will travel to Detroit on Tuesday before returning to the unfriendly confines of the Prudential Center on Friday to host the Flames.