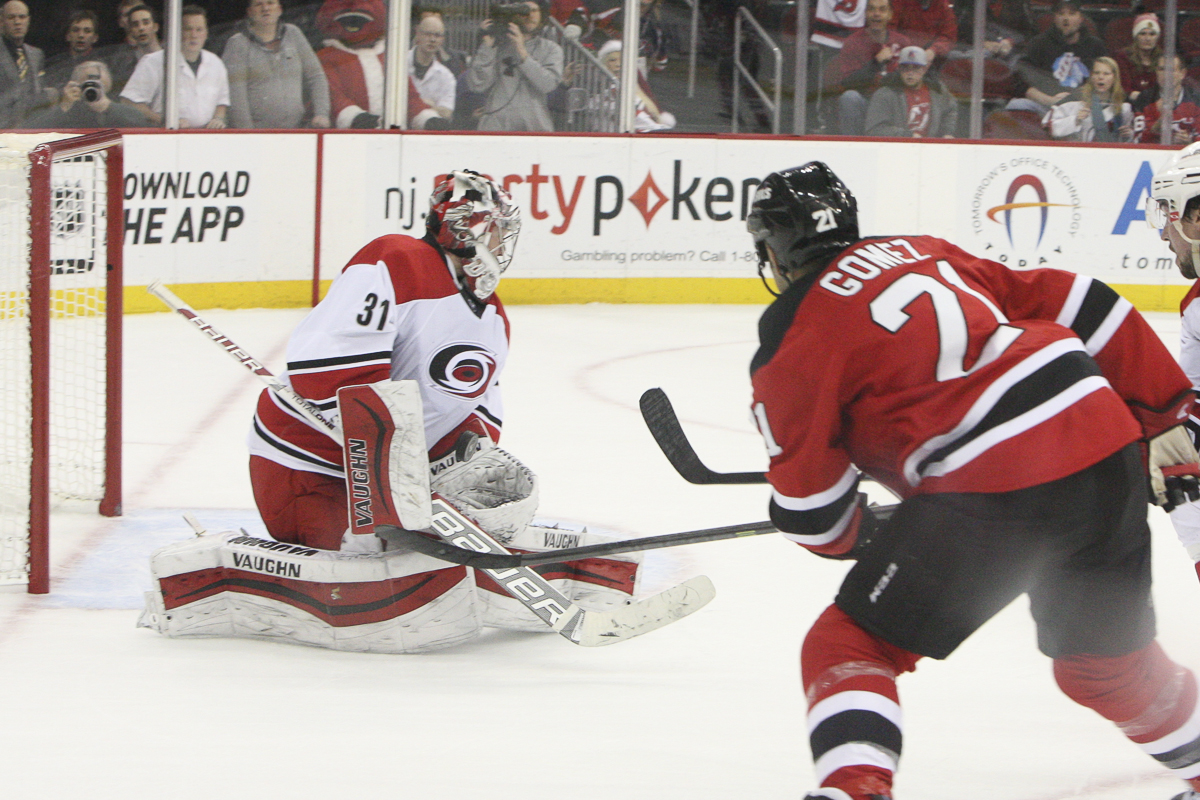 Khudobin blocks a shot from Gomez

NEWARK, N.J. – Less than a minute into overtime, Carolina’s Ron Hainsey jumped out of the penalty box.

New Jersey’s power play was officially over, and Hainsey found himself staring down Corey Schneider on a breakaway. Closing in on net, Hainsey took the shot.

Schneider made the save.

“[He] jumped out of the box,” Schneider said. “[I] saw it developing and the ice is pretty bad so I figured he might be shooting it. [I] just got down on it good and I was glad to make the save.”

It was one of 32 saves Schneider finished with, although it wasn’t enough to win as New Jersey lost its fifth shootout game this season. The Devils have lost six of their last season, and enter the holidays with a 3-9 record in December.

“It’s been a grind of a month,” head coach Peter DeBoer said. “I know no one wants to hear excuses and I’m not going to make any, but I’m definitely not going to throw our guys under the bus. If you’re in our dressing room, our effort’s there, they’re working at it.

“You put other teams in the situation we’ve been in here, with seven regulars out of the lineup, it’s not easy,” DeBoer said. “Guys are trying and it’s unfortunate that we didn’t get two points tonight. Our goaltender was excellent. We need to regroup here, get some bodies back.”

The Devils held a 1-0 lead through almost 40 minutes of play, until Ron Hainsey tied the game with 11:59 minutes left in the third with a deflected goal.

“I felt pretty good, and sometimes those are the kind of goals that it takes,” Schneider said. “It went off a shin pad and off the post and in. They throw enough pucks at the net, eventually they’re going to get a bounce like that.”

Stephen Gionta’s shot was New Jersey’s only goal of the game.

“Bernie made a great play getting it back,” Gionta said. “Their two guys did a good job tipping it in for me. So I’ll take it.”

Carolina outshot New Jersey 33-19, including 15-3 in the second period.

“We kind of got away from our gamelan the second period there,” Gionta said. “It’s something that we [have] to look at.”

The Devils failed to finish on several quality chances, including on a man-advantage late in the third period and into overtime.

“When the other things catch up to you, it gets a little sloppy, your execution gets off and that’s all it takes in this league so that’s what it is, that’s what it is and we’re dealing with it.”