A year ago it was the Devils who fell just short of Jimmy Vesey, the prized NCAA free agent forward who opted to sign with the Rangers. And this July it was the Devils who again just missed on Kevin Shattenkirk. His destination? Also on Broadway. But on Sunday the team finally caught a break adding Will Butcher, a Hobey Baker winning-defenseman from the University of Denver. 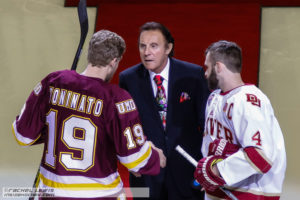 Butcher chose New Jersey after a lengthy free agent courting process. The Buffalo Sabres, Columbus Blue Jackets, Los Angeles Kings and Vegas Golden Knights were among those to inquired and hosted the 2013 fifth round pick by the Avalanche. A native of Sun Prairie, Wisconsin, Butcher is coming off a season in which he tallied career-high’s in assists (30), points (37) and games (43) en route to a national championship title.

The move comes just days after the Devils saw their 2012 fifth round pick Alex Kerfoot sign with the Colorado as a free agent. In many ways the move helps soften the blow both sides, though Butcher is younger by four months. If both players make the opening night roster they would face each other on Oct. 7 at the Prudential Center.

In signing with the Devils, Butcher, 22, joins a young nucleus that will be centered around this June’s first overall pick, Nico Hischier. And while the club boasts other youngsters including forwards, Michael McLeod, Blake Speers and Pavel Zacha, the defense core is considerably thinner. Michael Kapla, Mirco Mueller, Steve Santini and Colton White are among the under-25 blueliners who will try and compete for a spot in September. Restricted free agent, Damon Severson should be a lock for the defense when he eventually signs a contract extension–something that will be GM Ray Shero’s first priority now.

Butcher’s two-year, entry-level contract is worth an annual average salary of $925,000–the maximum for an entry-level deal. He became a free agent on Aug. 16 after graduating from the University of Denver and letting his rights with the Avalanche expire.

Outside of NCAA hockey, he’s also competed on the world stage at the World Junior Championships U-18 tournament boasting four points in 13 games and two appearances in the U-20 tournament tallying six points in 10 games.

Up next for Butcher and the Devils is the Prospect Challenge in Buffalo from September 8–11 which will also feature the Bruins, Penguins and host-Sabres.