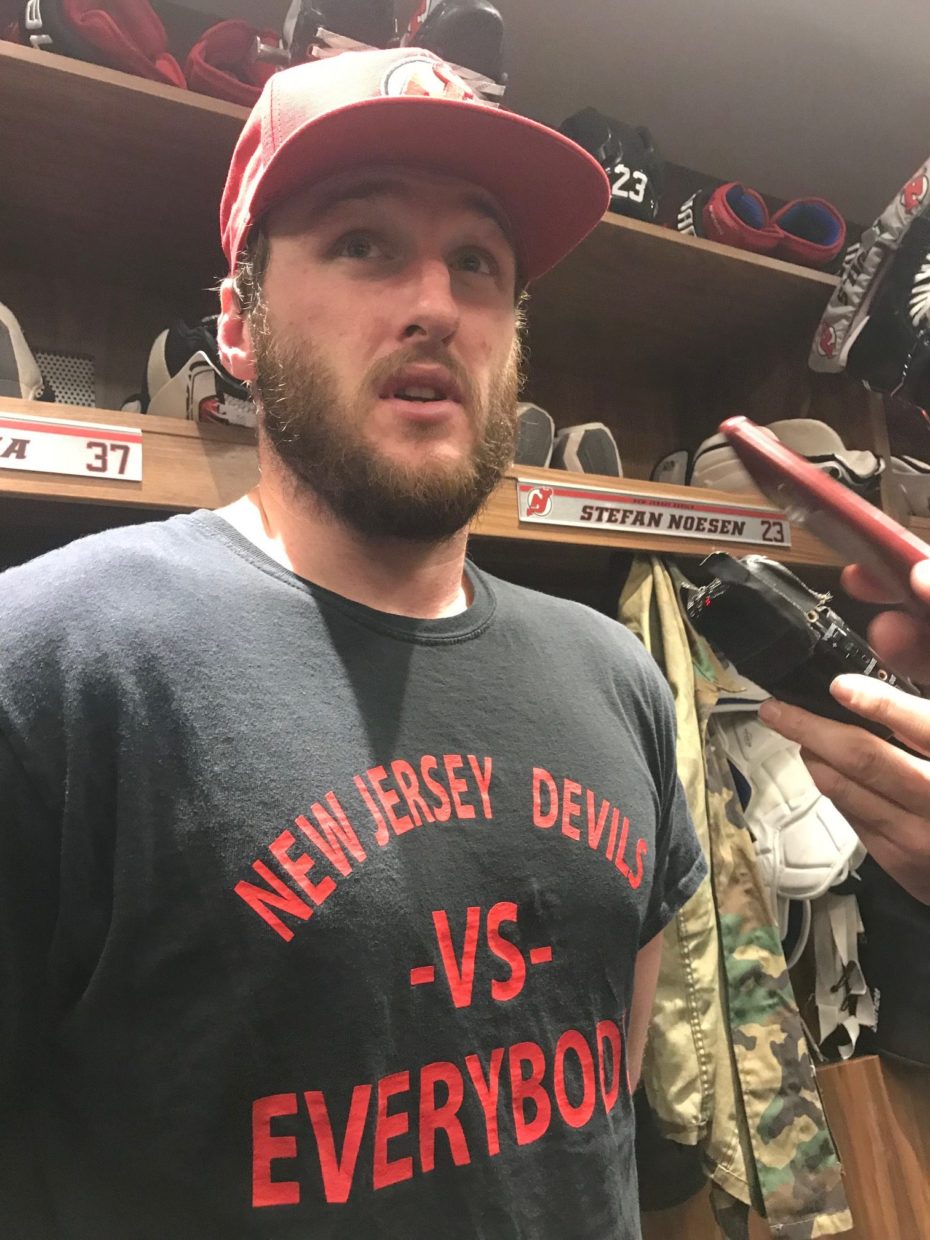 NEWARK–To be a good team in the National Hockey League, you sometimes have to win games where you could have played better. You also have to find ways to grind out goals. Tuesday night hosting the Hurricanes, the Devils found a way to do both–even if it took nearly all of regulation to decide it.

Stefan Noesen’s tally with 1:32 remaining in the third period helped propel the Devils to their fourth-straight victory and another late-season acquisition of multiple points.

It was hardly their finest showing. Pavel Zacha’s rebound at 5:47 gave the Devils an early lead to build off of. But an 11-5 shot advantage coupled with goals by Phillip Di Giuseppe and Warren Foegele followed instead to end the first period with a 2-1 Hurricanes lead.

Kyle Palmieri enjoyed a two-goal evening highlighted by a pair of power play goals. His first notched at 14:07 of the second on a pass from Taylor Hall evened the score at two apiece. But after Noah Hanifin restored the Carolina lead in the opening minutes of the third period, Palmieri, Hall and the New Jersey power play would answer with another equalizer.

The game intensified as time started to tick away at the period and with time and space more heavily guarded, it was the team’s third line that chipped in a late, clutch goal.

Keith Kinkaid made his third-straight start, stopping 31 of 34 shots faced and winning for the seventh time in his last nine appearances. It was the 11th-straight start with opponents registering 30 or more shots. The team’s starter–as of late–stood tall, helping the team keep pace with the rest of the conference including those on the outside with games in hand.

“We’re doing what we need to do, we need to worry about our game and not anyone else’s,” Kinkaid said. “That’s playoff hockey. You might not always have the best game, but you find ways to win. That’s good character stuff.”

Head coach John Hynes agreed that the team didn’t have its best game, but did manage to get good goaltending.

“The way that we played the first 10 minutes of the game really disappeared,” Hynes said. “When you hit some of those situations where the other team has momentum or your back on your heels for whatever reason–that’s the difference between winning and losing when your goaltender comes up big. When you make mistakes or the other team is pressing. Keith kept us where we needed to be.”

For Noesen, who was a healthy scratch last week, the game-winner was a visible thrill. So too is the organization’s belief that the team is playoff bound.

“That’s a big one–as of right now, it’s the biggest win of the year,” he said. “Every win going forward is going to be the biggest one, especially coming down the stretch.

“We have guys that are driven, we have guys that want to win. We have a leadership group and coaching staff that’s pushing us in the right direction. Since the trade deadline when Ray (Shero) gave us two more pieces to add to it, the belief throughout the room, throughout management, throughout everything is there.”

With the playoff race intense as ever, Hynes will happily take the points, but knows it’s not an indictment of how the team can afford to play down the stretch, especially hosting the defending-champion Penguins on Thursday.

“It’s fantastic we found a way to win this game, but we certainly got to come back and to the rink tomorrow and re-gather ourselves and make sure we move past this game and we’ve got to be a better team versus Pittsburgh,” he said. “To have success this time of year, you have to go out and play. You have to play to your strengths, you have to be on your toes, you have to have confidence in yourself and our identity and not really worry about end results. The end result you can’t really control. But what we can control is our mindset, attitude, energy and focus level. When you do those things you give yourself the best chance to win.”