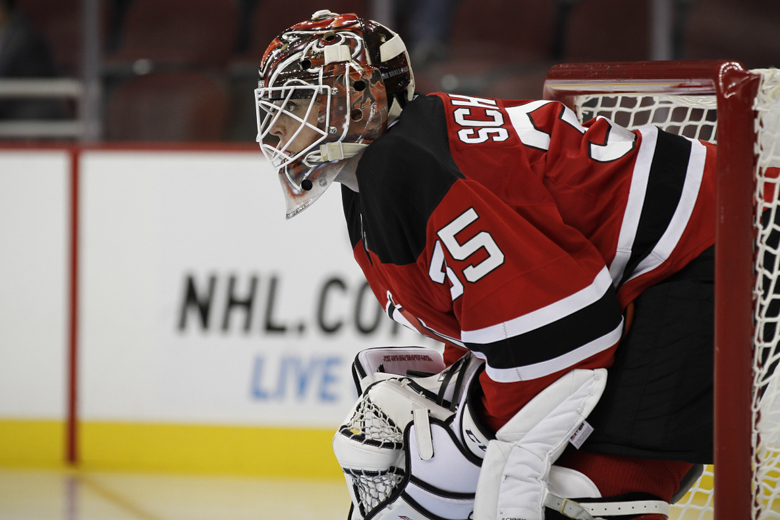 Corey Schneider of the New Jersey Devils looks on intently against the San Jose Sharks on October 18, 2014 at the Prudential Center in Newark, NJ.

As it turns out, the Maple Leafs aren’t the only Eastern Conference team that’s had run in’s with the Canucks lately.

In an emotional tilt Tuesday night in Newark, the Devils skated off to a 3-2 win over Vancouver, improving to 8-0-2 at home on the season. Though a lot of the talk after the victory was about Canuck defenseman Philip Larsen, who was stretchered off the ice in the second period following a collision with Devils’ Taylor Hall.

With the score tied at 1 in the second, Hall caught Larsen with his head down behind the net. Larsen, who was knocked out prior to hitting the ice, was transported to a local hospital and stayed the night. He was released and cleared to return to Vancouver on Wednesday. The NHL Department of Player Safety deemed Hall’s hit legal and announced the forward will not face supplemental discipline.

Hall, a former teammate of Larsen while in Edmonton looked visibly upset speaking with reporters following the conclusion of the game.

“I’m looking to make contact there, but I never want to see a guy laying on the ice like that,” Hall said. “The only thing I’m thinking right now is: I hope he’s alright.”

The feeling similar in the Vancouver locker room, where captain Henrik Sedin said the hit took some air out of the team’s sail.

“It’s never fun to see someone go down like that,” Henrik Sedin said. “It took a bit away from us, we just hope that he’s OK.”

The hit was part of several fiery moments in the contest that started with New Jersey’s Damon Severson fighting Canucks’ Brendan Gaunce in the first period. It was followed by a dangerous board from Michael Chaput that left Travis Zajac down on the ice. Zajac suffered a broken nose on the play and left the game to be tested for a concussion but returned for the second period, sporting a full cage. There was no penalty assessed to Vancouver on the play, but there was on the Devils’ Jon Moore who went after Chaput following the hit. Moore was given a game misconduct and instigator to go along with a fighting major–17 penalty minutes in total.

“That was me,” John Hynes said. “We had a pretty firm discussion with the referee and he didn’t like it.”

Hynes, in his second year as an NHL coach discussed his admiration for the players, which makes an incident like the one involving Larsen all the harder to watch.

“As coaches in the league, you have so much respect for the players,” he said. “You want to see hard and competitive games, but you never want to see situations where players can get hurt and did get hurt tonight.”

Amidst the commotion, there were some goals:

Taylor Hall scored his 7th of the season 3:42 into the game to put New Jersey ahead 1-0. The Canucks would even the score 1:10 into the second period, Daniel Sedin’s goal came on a carry-over five-on-three advantage for Vancouver following the Devils’ march to the box after the hit on Zajac.

Later on their own power play, the Devils would respond with their own goal to go ahead 2-1, Kyle Palmieri picked up a smooth pass from Hall while going to the net for the goal that just beat Vancouver netminder Jacob Markstrom stick side. New Jersey would add one more before the end of the second period, as unlikely goal-scorer and defenseman Ben Lovejoy found the back of the net to make it 3-1.

Henrik Sedin would score 3:58 to cut the deficit in half, but the Devils would hang on to pick up the victory, extending their unbeaten streak at home. The win also improved Cory Schneider’s record versus his old team to 3-1-2. The goaltender stopped 20 of 22 shots en route to the team’s first regulation win since Nov. 12.

Schneider, who was dealt to New Jersey at the 2013 NHL Draft for the ninth overall pick recalled some of the tempers that have flared in the consecutive home meetings with the club.

“There was some last year,” Schneider said. “For whatever reason we seem to have pretty animated affairs with these guys even though we don’t see them a whole lot.”

The Devils will see the Canucks in Vancouver on Jan. 15. For now though, they’ll set their sights on a stretch of three games in four nights beginning in Montreal on Thursday, followed by a home meeting with St. Louis on Friday and their first matchup of the year across the Hudson versus the New York Rangers on Sunday.