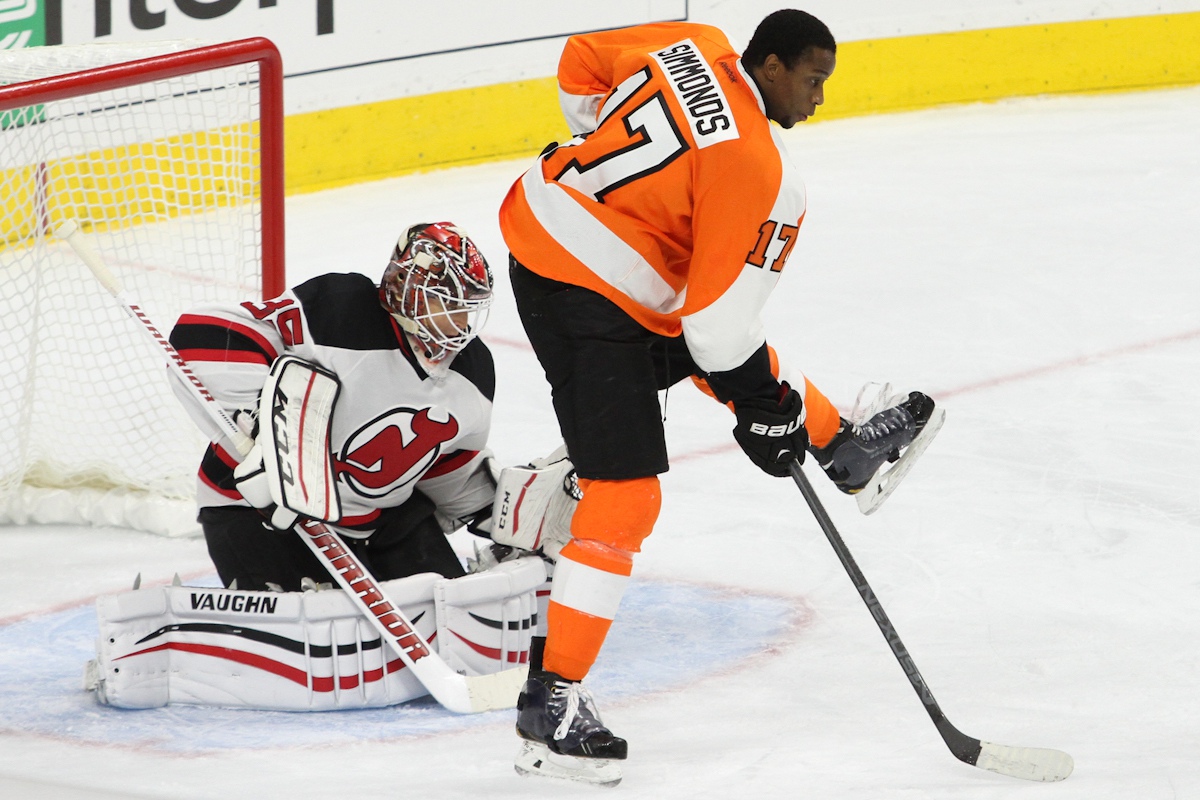 Before Joe Whitney played his first NHL game on Saturday, Stephen Gionta was contemplating why former Boston College Eagles are so coveted.

“I don’t know. I was thinking about that earlier today,” Gionta said. “Coach [Jerry] York does a great job in bringing guys through. Not only teaching on ice stuff, but off ice and how to be a pro before you actually get to the pro level.

After Friday’s victory over Washington, the Devils sent Whitney down to the AHL. But that still leaves the Devils with three former Eagles on the roster, including Peter Harrold, who’s currently on injured reserve, and Cory Schneider.

“We say once an Eagle always an Eagle when you leave BC,” Whitney said. “It’s nice to have Schneids and Gio and Peter Harrold around too, it’s almost like family a little bit.”

Whitney, who was named to the AHL All-Star Classic, won two National Championships with the Eagles in 2008 and 2010.

“I think it’s pretty special culture they have there,” Whitney said. “Jerry York and all the coaches do a great job of getting good character guys and you learn a lot of things over your four years off the ice as well.”

The Devils signed Gionta as a free agent on April 12, 2006, and he spent the next few years in the minors. They re-signed him on Aug. 26, 2010, and the New York native played his first NHL game that season.

One year later, New Jersey signed Harrold — Gionta’s former college roommate. The two played together at BC, along with Schneider.

“It’s always fun just ribbing each other,” Schneider said. “I think we probably know a few things about each other in college that nobody else really knows.

“It’s kind of fun to bring up those things that no one else is really in on and just recall some of the stuff that we did back then when you make dumb decisions.

“It’s good to kind of have that connection.”

The connection between Boston College and New Jersey started in 1986, when Doug Brown — father of current BC captain Patrick — joined the Devils. He played the first seven of his 15 NHL season with the team from 1986-93, recording 151 points (72g, 79a) through 350 games.

In 1989, the Devils drafted Eagle Bill Guerin in the first round, followed by David Emma in the sixth.

Guerin, who played at BC in 1989-91, spent parts of seven seasons with the Devils. The Worcester, Mass., native scored 214 points (108g, 106a) over 380 games. He recorded 25 points, fourth on the team, when New Jersey won its first Stanley Cup. Guerin was inducted into the U.S. Hockey Hall of Fame.

David Emma graduated as BC’s leading all-time leading scorer with 239 points, a record that still stands. As a senior in 1991, he won the Hobey Baker Award and the Walter Brown Award. He also recorded 81 points that season, the second-highest single-season amount in BC history. With New Jersey, Emma played in 23 games and recorded 11 points (5g, 6a) from 1992-95.

BC’s second-highest leading scorer all time is Brian Gionta, one of New Jersey’s best forwards. Brian, the older brother of current Devil Stephen, was drafted by New Jersey in 1998.

He played for the Devils from 2001-09 and won two Stanley Cups with the organization. Gionta netted 312 points (152g, 160a) in 473 games and ranks eighth on the organization’s all-time goals list. In 2005-06, he scored 48 goals — the most by a Devil in a single season. The right wing recorded 89 points the same season, a total that’s fourth-highest in single-season scoring in the organization.

Clemmensen and Gionta reunited as teammates with New Jersey from 2001-09, excepting the 2007-08 season.

Clemmensen served as a backup with the Devils for several seasons, but played in 40 games during 2008-09 and posted a 2.39 goals-against average when Martin Brodeur was injured. That season Clemmensen and Gionta also played with Mike Mottau, a BC teammate from 1997-00.

Mottau, a Hobey Baker winner, recorded 50 points (7g, 43a) over a three-year span with the Devils. While with the Eagles, Mottau was named the Hockey East Co-Player of the Year, the Best Defensive Defenseman Award as a senior and won the

Stephen Gionta is in his third season playing in the NHL with his former college roommate Harrold. The two spent a majority of their first season together in Albany, New Jersey’s AHL affiliate. But the pair, who roomed together last season, joined New Jersey in the playoffs en route to the Stanley Cup Final in 2012.

It was the No. 1 moment the two experienced together in the pros, Gionta said.

“It was a familiar face during the playoff run and it was pretty cool to share that with him,” Gionta said.

The pair spent three seasons in Maroon and Gold together, while Schneider joined the duo for two seasons in Chestnut Hill, Mass.

Schneider spent three seasons with the Eagles, posting a 29-12-1 record in his last stint with the program. His eight shutouts in 2005-06 are the most by an Eagle goalkeeper in a single season.

“College, it’s a bond and you never can get those years back,” Schneider said. “So you always look after guys that you sort of know and went to school with to make sure you take care of them.”

Now Steven Santini, drafted by the Devils in the second round of the 2013 NHL Entry draft, is waiting in the pipeline. He’s a freshman for Jerry York’s team and has seven points through 20 games. The Mahopac, N.Y., native also played for U.S.A. at the World Junior Championship this season.

“[York] has done a great job kind of building up a reputation and making it a place where guys do want to go,” Schneider said.

“I don’t know if he’s going to make your one-timer that much better, but he’s going to instill the discipline and a winning environment and responsibility.

“Those [are] things you’re going to need to succeed at the pro level and I think he does a great job with that.”