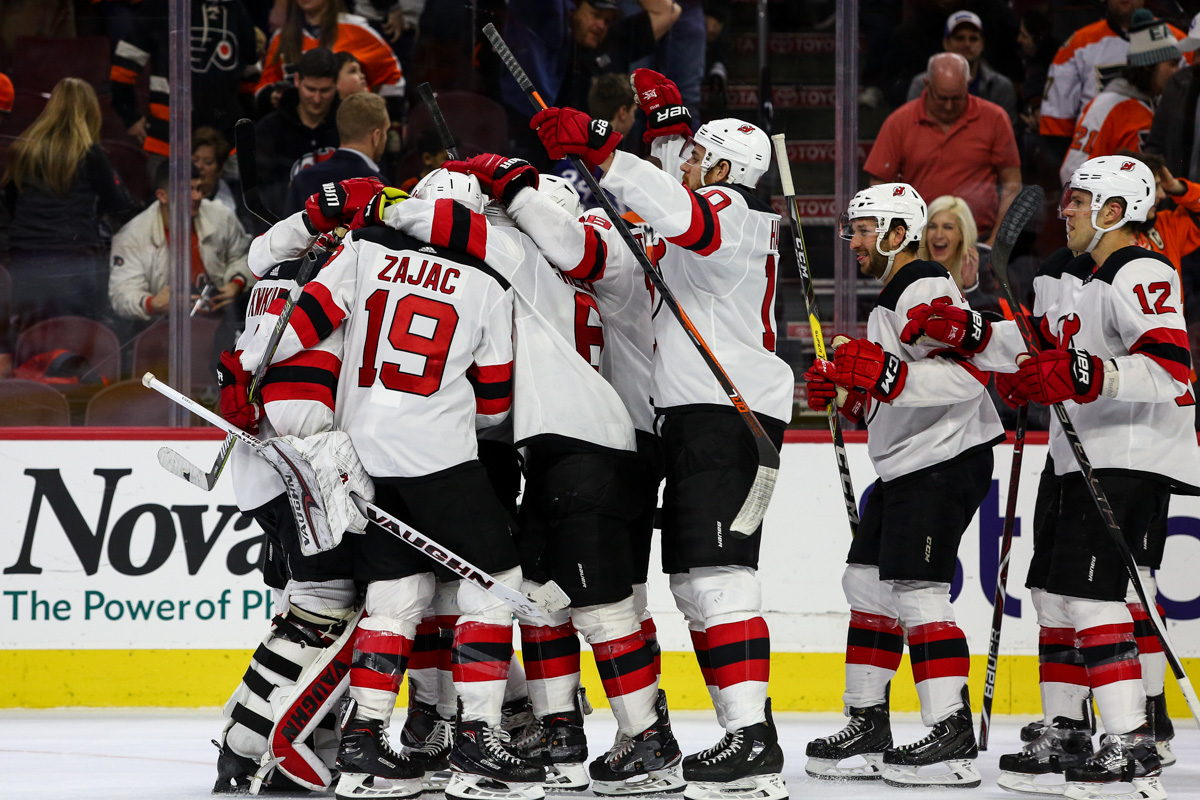 Devils Clincher: What Was Said

NEWARK–There was a great sense of pride in the Devils’ locker room Thursday night at the Prudential Center. It wasn’t that the club ended its six-year playoff drought, or that it improved upon a 70-point showing in 16-17 to at least 27 points better this year. It was that they got in on their own. That, even if the odds were steadily climbing in their favor, they put the clinched “x” beside them in the standings.

They entered Thursday with some jump in their legs–owning all seven of the shots in the first five minutes of play. But on their first real scoring opportunity while on the power play, Maple Leafs’ William Nylander scored. New Jersey would counter with a pair of even-strength goals in the second period. First from Pavel Zacha 7:55 in; then a late Miles Wood tally at 17:02. Toronto would empty the net with 1:40 left in play, but were unable to beat Keith Kinkaid for a second time.

Now, the next chapter begins on what has already been an impressive season in New Jersey. The surging Devils enter the playoffs with some compelling storylines–from a Hart candidate to an unlikely hero; from a pair of veterans to the youngest coach in the NHL. Here’s what was said in an exuberant, active lockerroom.

“We didn’t limp in, we didn’t get help from other teams, we played our way in,” Taylor Hall said. “That’s the coolest thing about this season. We made our own way into it.”

For Hall, Thursday’s clincher meant one thing: That for the first time in his eight-year career, the 26-year-old is bound for the Stanley Cup playoffs.

“I think the biggest thing I’m excited for is the atmosphere,” he said. “Just how fast it’s going to be, how every chance is going to be a huge ovation and a huge noise from the crowd. That’s what it’s all about. It’s been a long time since I experienced that–not since junior hockey and I’m excited for that.

“It’s an 82-game grind and all it’s about is getting to the playoffs and giving yourself a chance. Every year there’s a team, that all you have to do is get in and wreak some havoc and I think we’re one of those teams.”

Somewhere in there is Taylor Hall…make that playoff-bound Taylor Hall pic.twitter.com/Y09aN9EyTT

No matter how Saturday’s season finale in Washington plays out, the Devils will close out the season as one of the hotter teams in the league. They have just two regulation losses since March 10th and the beginning of a six-game road trip that threatened to spoil the season, but ultimately saw the club earn eight of 12 points and catch late-season fire–they’ve surrendered just one point in their last nine games versus conference opponents. That too was an area of pride for a Hall, who showed no setback after his 26-game point-streak was broken on March 8. He’s since netted 9 goals and 19 points in 13 games.

“That’s the biggest thing I’m proud of is how we’ve played against the best teams,” he said. “That should give us a lot of confidence in the playoffs. Whoever we play, it seems like some of our best games are against the harder teams in the league.”

For Hall, the trip to the postseason helps make up for lost time in the league–years with an underperforming Oilers squad only to be traded away a year before the team ended its own playoff drought. With 93 points, he’s having the best season of his career–a Hart trophy favorite who’s embraced the change spawned from the 2016 trade that caught him off guard initially.

“The whole area, country, and team change was a big thing for me,” he said. “Some of the guys might get used to it a bit quicker than I did. I think the fact that we didn’t have a terribly successful season last year was a reason why it took a little longer to get used to. I think over the summer a lot of us came in really committed to how we wanted to play and to just having a better season. Whether we made the playoffs or not, we were going to be a hard team to play against and I think we proved that.”

Perhaps the most unlikely story surrounding the Devils has been the play of once backup goaltender, Keith Kinkaid. A local product of sorts (Long Island, N.Y.), Kinkaid was with the organization the last time it experienced playoff hockey–albeit he was finishing his first full season in Albany while his childhood idol, Martin Brodeur was in the pipes for the deep playoff run and what was the final run of his career. The 2013 Draft Day trade for Cory Schneider was meant to bring the team back to the playoffs–with the former Canuck tender as the answer in net. But following some struggles after his return from a groin injury, it’s been Kinkaid’s crease.

Thursday marked the eighth-straight start in a span that included two sets of back-to-back games. His 26 wins this season surpasses his entire win total since breaking into the league as a regular in 2014-15. In many ways, Kinkaid’s journey mirrors the team’s own.

“I think Keith really signifies what our team has been about,” head coach, John Hynes said. “We’ve gone through different situations where guys have had to step up, whether it’s because of injuries or competition within our team. To be able to see him play the way he has played and be in this situation–he’s worked hard for it. It’s nice to see and hopefully he continues to be at the same level he’s at now.”

“I just wanted to do my part, whether that was in the net or on the bench,” Kinkaid said. “We got no help anywhere else. We had to punch our own way. That shows what type of team we are and that’ll build us as a better team. That’s good for playoffs.”

Kinkaid’s play as of late has him set to assume the starter’s cage for the playoffs and he’ll do so with a lot of faith in the group in front of him and how well they’ve battled against some of the best teams in the league.

“We can play with anyone,” he said. “We’ve gone into some tough buildings and dominated the play. Obviously, the playoffs will be a different atmosphere and everyone ramps up their game, but I don’t think we’ll have a problem doing that.”

“He’s kind of been our backbone the past couple weeks,” Andy Greene said of Kinkaid. “It’s been an awesome stretch of hockey and to see the way he’s played and stepped up, it’s been awesome to see.”

Devils captain, Andy Greene and alternate captain, Travis Zajac are the only on-ice linkage to the last time the franchise enjoyed playoff hockey. It went the distance–a six-game defeat to the Kings in the Stanley Cup Final. The veterans, 35 and 32, respectively, suffered through five losing seasons and saw their roles change in that time. Greene’s minutes have decreased steadily with the additions of Will Butcher and Sami Vatanen. Meanwhile, Zajac has transitioned to a more defensive role–something he’s preferred, amidst the arrival of Nico Hischier as the team’s top-line center. But with a young roster with little playoff experience, the two will be important components who are more than excited to be back in the hunt.

Zajac went 12-for-19 on Thursday including a late defensive-zone faceoff to gain control and send the puck down the ice to kill the clock and punch the ticket to the postseason. And while Greene has been afforded the luxury of pacing himself for much of the season with a deeper defense, he saw a team-high 24:38 in ice-time on Thursday and was credited with four blocked shots. Once regulars to the postseason dance, they’re excited to return following the layoff.

“You’ve got to go through some down times to really see what you’re made of,” Zajac said. “We’ve done that and have passed those steps the right way.

“We were fortunate to come to a team that was in the playoffs every year. You knew you were making the playoffs. I don’t know if you take it for granted, but you realize how tough it is to get back there. I know (Greene) has worked extremely hard as our captain to come to the rink and provide the right leadership throughout the good times and bad times. He’s always been there as a stable force for us on the backend. I know we’ve worked extremely hard to help this team move in the right direction and help this team get back there.”

“There’s days where we were further away than we would have liked,” Greene said. “We have a lot trust in this organization–it’s a process. Obviously, you want it to happen right away, but sometimes you have some bumps and bruises along the way. But once we get there, it feels that much sweeter.”

Hynes offered praise for the duo:

“For those guys to go through a different coach, different general manager–lots of things have changed, but they’re still big parts of the fabric of the team,” he said. “They were with us through the tough times, specifically last year. They worked, they were loyal, they always wanted to do the right things. It’s really nice to see high character guys that really care about the front of the jersey. They are Devils and they’ve been Devils for a long time and for them to be a part of this again is real special. I take a lot of pride in that as a coach.”

The Coach Getting Results

Three seasons. That’s how long it took John Hynes to help lead the Devils back to the postseason. That’s how long it took for the youngest head coach in the NHL to mold the team, mindset and style into his form. A style that resonates with today’s game and the team identity. Constant attacking, quick in transition and an emphasis on speed and skill. In the regular season, he got a nice output from Hall and Kyle Palmieri and helped a young Nico Hischier develop into a reliable young forward. That much you could expect. But the production from the club’s bottom six, particularly with the likes of Brian Boyle, Blake Coleman, Brian Gibbons, Stefan Noesen and Miles Wood is a big part of the turnaround season. Gerard Gallant and the Vegas story is hard to pass up, but Hynes deserves some Jack Adams consideration as well.

“You could feel how bad we wanted it–how close we were to it,” Hynes said following the team’s clinching game. “Really happy that we won our way into the playoffs. That’s something that I think is important to our team. We didn’t get it handed to us. We went out and won the game.”

Though Hynes wouldn’t offer much insight on his individual success as a coach–he pointed to the group effort and focus level.

“Whether teams coming at us from behind us or us trying to catch teams, it was always about our game,” he said. “Collectively as a group, we were able to have a strong focus level on what’s important now; control what we can control and try and be as good as we can every day. Some days we were really good and some days we weren’t. I think for the most part, it was a strong focus throughout the year and down the stretch it was important. I think it’s going to help us as we move forward into the playoffs that we had to battle as hard as we did for as long as we did.”

For all the thrill the players, coaches and organization have in making the postseason, Hynes made it clear that the expectations remain high–even if this opportunity poses much to learn from and build off of.

“We’re not going to be satisfied just because we made the playoffs–we’ll be ready.”