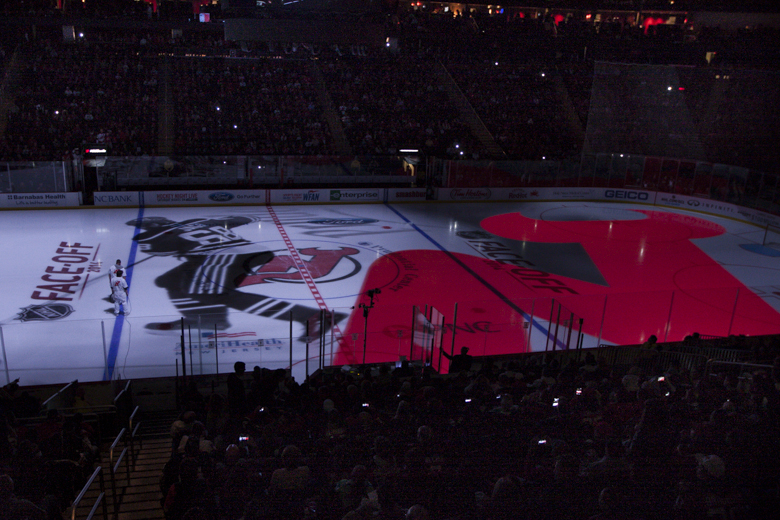 The New Jersey Devils debut their state of the art ice level video projection system in their home opener against the San Jose Sharks on October 18, 2014 at the Prudential Center in Newark, NJ.

The Devils announced the acquisition of Marc Savard from the Panthers on Friday.

Savard, 38, is entering the final season of his 7-year, $28.15 million dollar contract he signed with Boston in 2010. Savard, who led the Bruins in scoring in each of his first three years of the deal hasn’t played since the 2010-11 season. After suffering numerous concussions during a 13-year NHL career, Savard was forced to hang up the skates due to post-concussion syndrome.

His stay, albeit a formality, in Florida only lasted a season. He was dealt from Boston to the Panthers along with Reilly Smith for Jimmy Hayes last summer.

In Friday’s deal the Panthers also sent their second round pick in the 2018 NHL Entry Draft to the Devils, who surrendered minor league forwards, Graham Black and Paul Thompson.

For New Jersey, the deal gives them roughly $4.03 million in cap dollars to help reach the cap floor ahead of the 2016-17 season. The actual dollars of the once front-loaded deal are $575,000. With just one year left on the deal and New Jersey unlikely to break the bank this summer, they essentially acquire a premium in a second rounder in exchange for two minor leaguers, neither of whom figured to make the NHL next year. Savard can be placed on long-term injured reserve at the start of next season.

From the Florida end of things, the deal represents the notion that the Panthers will look to continue going forward after falling in six games to the Islanders in the first round despite sporting a franchise-best 103 points. With much of its team already under contract, the Panthers are looking to set themselves up to be fairly active in free agency.

Black played in 50 games this past season with the Albany Devils, registering 9 points. Thompson, who saw action in 3 games with the Devils, played in 56 games for Albany, scoring 35 points. Both players will enter the final year of their contracts that will see them become restricted and unrestricted free agents, respectively.

With Friday’s acquisition, the Devils now have  $8.8 million in cap dollars for two players who will never play again. Ryane Clowe, who signed a 5-year, $24.25 million dollar contract in 2013, missed all of last season also due to concussion-related injuries. His career is also over. More interestingly though to Clowe is that his contract, which expires in 2018, contains a no-movement clause. With news coming that such contracts must be protected in the anticipated 2017 expansion draft, that could mean Clowe will have to be protected regardless of his injury status for the 2017-18 season.