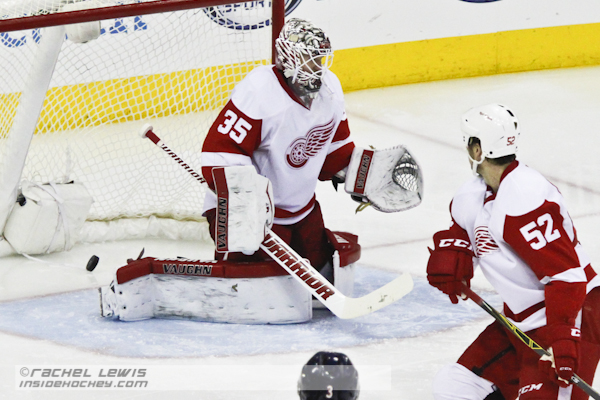 Another NHL season is starting and for the Detroit Red Wings an attempt to make the Stanley Cup Playoffs for the 26th consecutive season.

The season analysis begins with who has left the team and who has joined since last season. No longer with the team, Pavel Datsyuk, Brad Richards, and Kyle Quincey. Datsyuk desired to play in his Russian Homeland with one year remaining on his Red Wing contract.

Ken Holland traded the contract to the Arizona Coyotes allowing Arizona to move up in the player draft, and Arizona gave the Red Wings Joe Vitale who is on LTIR and their lower draft pick. While Datsyuk and his unbelievable skills were unequaled through the years, his play was in decline due to injuries and age. Brad Richards retired, and Kyle Quincy signed a contract with New Jersey.

The players who joined the team through unrestricted free agency are Frans Nielsen, Thomas Vanek, and Steve Ott. Frans Nielsen played 10 years for the New York Islanders and is an adequate two-way player. He in effect is Datsyuk’s replacement, but no one could match Datsyuk’s skills during his prime, and Nielson isn’t expected to be another Datsyuk.

Vanek was bought out by the Minnesota Wild of the last year of his contract and then signed with the Red Wings for one year. Vanek is a goal scorer who has been accused of taking shifts off sometimes meaning he didn’t play all out all of the time. The Red Wings feel the contract will inspire Vanek to prove doubters wrong. Steve Ott was signed for one year to provide toughness and grit to the team, an ingredient the Red Wings need.

The rest of the team will be evaluated by position beginning with the forwards. Since the lines will be juggled during the season, the players will be evaluated by position beginning with the forwards. Justin Abdelkader is a tough physical forward who isn’t afraid to go into the tough areas and can also score. He was also named one of the alternate captains on the team replacing Datsyuk. A last-minute addition to the roster is Andreas Athanasiou who has blazing speed and scoring ability. He was able to score goals when called up from the minor league team, and doing so with little ice time last season.

Another grinding type player is Luke Glendening who is excellent on faceoffs, and penalty killing. He also scores goals on occasion. He excels at irritating the opposition. Darren Helm who resigned a multi-year contract is a fast skater and penalty killer. He needs to improve on finishing his goal scoring opportunities.

Dylan Larkin was a pleasant surprise last season making the team on his first try. He also has blazing speed and goal scoring ability. Dylan isn’t afraid to shoot the puck, hence his goal scoring from anywhere on the ice. The Red Wings are hoping he progresses more this season. Drew Miller was signed to a one-year contract due to his smart play and penalty killing skill. He missed most of last season due to injury and is eager to contribute.

Gustav Nyquist is a water bug type of player who is always scooting around setting up and scoring goals. He had a disappointing year (for him) last season, and he needs to step up his play if the Red Wings are to make the playoffs. A similar player to Nyquist is Tomas Tatar. While having a better year than Nyquist, he must improve this season. The focus is on these two players for the Red Wings to excel. Riley Sheahan is one of the larger forwards on the team but struggled most of the season being a contributor. Toward the end of the season, he used his size to position himself in scoring areas. He has the skill to score and must use it.

Captain Henrik Zetterberg is a workhorse, but like any player age and mileage are catching up to him. Normally a center the plan is to play him on the wing to reduce wear and tear on his body. He is currently on short-term injured reserve. The plan is to reduce the amount of his playing time.

Next, is the analysis of the defensemen; perhaps the weakest link on the team.

Danny DeKeyser signed a multiyear contract this year with the Red Wings. He is a steady defender who often covers his defensive partner’s mistakes. Former coach Mike Babcock called DeKeyser the “Eraser” for obvious reasons. Jonathan Ericsson is in the middle of a multiyear contract and was very disappointing last season. He does have a hip aggravation, which obviously affected his play, but nonetheless, he has to cut down on turnovers.

Mike Green was signed last season as the right-handed shooting, puck moving defenseman the team was looking to obtain. He is the quarterback on the power play but isn’t the best defensive player. If he can provide more goal scoring and set ups, his defensive shortcomings may be overlooked. Niklas Kronwall is currently on short-term injured reserve due to a knee problem. He like Henrik Zetterberg is older with mileage on his body. Look for reduced ice time for Kronwall.

Alexey Marchenko is in his second season and is a steady defensive player. The team is looking for more from him this season. Xavier Ouellet is beginning his first full season with the team, so he is still a work in progress. Brendan Smith is one of the seasoned defensemen.
He has the ability to bring the puck up the ice but is prone to turnovers. He may be used on the power play this season due to his puck moving skills. Ryan Sproul was also added to the team on the last day, so he is green. He will be the extra defenseman until Niklas Kronwall returns. Since he cannot be sent back to the minor leagues without being exposed on waivers, the Red Wings may have be creative if they want to keep him.

Goaltenders Jimmy Howard and Petr Mrazek will be sharing the net with Mrazek deemed the starter for most games. Both goaltenders have been hot and cold as goaltenders seem to be. Mrazek started the season very well but slumped around February. It was learned Mrazek was playing through an injury. Jimmy Howard was a suitable backup after Mrazek suffered his injury, albeit an expensive one. The Red Wings attempted to trade Howard several times but did not find any partners. Either way, it looks like the team has two solid goaltenders.

The coaching staff was changed during the off-season with Jeff Blashill continuing as the head coach. The changes should pay off dividends with an improved power play and goal scoring ability. As mentioned Pavel Datsyuk is gone, but his play declined. With the additions of Frans Nielson and Thomas Vanek the power play and overall scoring should improve. Keep in mind the Red Wings were 23rd in scoring last season and scored fewer goals than the opposition, yet still nosed into the playoffs.

For the Red Wings to make the playoffs the younger players MUST step up this season. Scoring more goals takes pressure off the defensemen.

It is obvious the defense is the weak link, so there is a possibility of a trade during the season to improve it. Ken Holland is in the position that if you make a trade you don’t create a new hole by fixing another one.

Finally, almost all of the pundits predict the Red Wings playoff streak will end this season. Of course, they have predicted it for years. Eventually, they may be correct, but I wouldn’t count the Red Wings out.
Would you?