Whisper it quietly but the Detroit Red Wings are in contention for the Eastern Conference playoffs. This is their first season without Mike Babcock at the helm. Babcock had led Detroit for ten magnificent seasons before departing to confront the ultimate challenge in NHL hockey today—ending the Toronto Maple Leafs 48 year Stanley Cup drought—a task he will not succeed this season.

Babcock’s departure engendered great risks. Many a team has faltered after losing a Hall-of-Fame coach. Detroit has avoided all of this and has risen to become the number three team in the Atlantic Division and the number 10 in the NHL overall. Amazingly the Wings have prospered despite not having any dominating stars save for youngster Dylan Larkin who has sparked Detroit (and the NHL) with his solid two-way skills (Larkin is tied with the Kings Tyler Toffoli for the NHL lead in the plus/minus category with an average of +22). Indeed Larkin stands a good chance of winning the Calder Memorial Trophy as the NHL’s rookie-of-the-year.

The Wings have been winning games even though they have not dominated the key offensive or defensive categories at all. Like the Florida Panthers the Wings are a mix of graybeards and youngsters slowly growing up in the Red Wings tradition. Henrik Zetterberg, Larkin, Tomas Tatar, Gustav Nyquist, and Justin Abdelkader supply the offense while Mike Green and Niklas Kronwall anchor the defense. And yet under the leadership of the young Jeff Blashill the Red Wings remain in playoff contention. 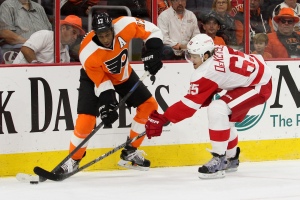 Jeff Blashill faced a stern challenge in succeeded the legendary Mike Babcock but, so far, has succeeded by balancing his dedication and emotional intensity with a more relaxing, approachable persona. Blashill was discovered by Babcock when Jeff led the Indiana Ice to the 2008/09 Clark Cup in the USHL. After a lovely one year stint in NCAA Division I hockey, Babcock tapped Blashill to be his assistant coach where he served during the 2011/12 season. Both Babcock and Wings GM Ken Holland were impressed by Blashill and decided to groom him for greater responsibilities by giving him the head coaching job with the Wings AHL affiliate in Grand Rapids.

Blashill (according to my rating system) earned a coaching value of +37 with an Average Season Rating of +12.33 in three seasons of AHL coaching with two divisional titles; three playoff appearances; and the 2012/13 Calder Cup title to his credit—a brilliant coaching performance (if Blashill ever leads the Wings to the Stanley Cup title he will become only the seventh man in hockey history to coach a Calder and Stanley Cup title win).

When Mike Babcock left the Motor City it was inevitable that Blashill would get the nod for the head coaching position. Although the team slumped during December, going 3-5-3 from games 28 to 38, Detroit has rebounded with two hard-fought wins over Buffalo and New Jersey.

Succeeding a future hall-of-fame coach like Mike Babcock is not a pleasant task and it would behoove Jeff Blashill if he remembers what happened to Dave Lewis after he succeeded Scotty Bowman as head coach of the Detroit Red Wings in 2002. He led the Wings with a more casual easy-going approach and the team failed to repeat as Stanley Cup champions and failed to play up to their championship potential. It cost Lewis his job and Ken Holland placed Dave Lewis with Mike Babcock who was made of sterner stuff.

Blashill needs to be made of sterner stuff too if he is to have a long NHL coaching career and the way he is going, he seems well assured of doing so.