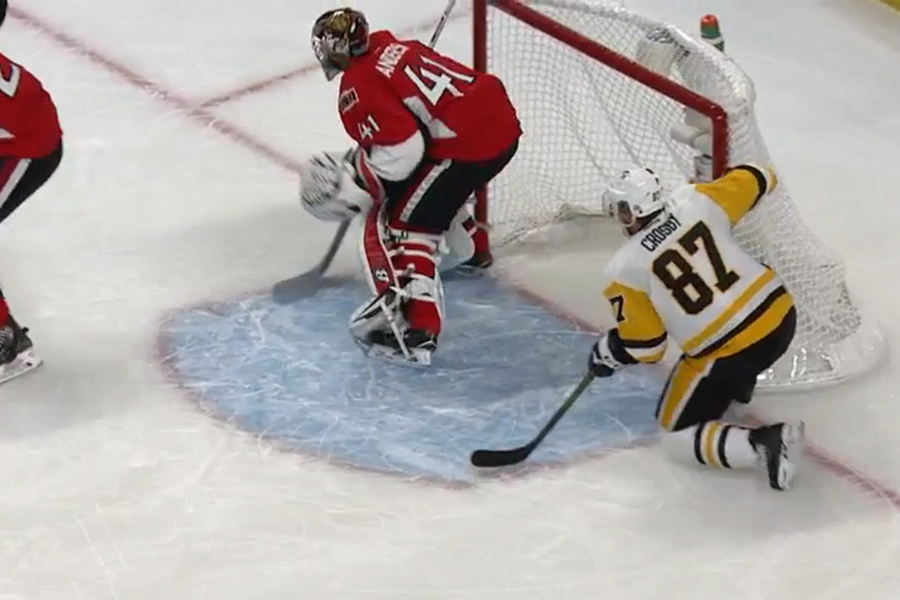 The Pittsburgh Penguins were disappointed with their effort Wednesday in Game 3 and promised a better performance in Game 4.

They brought it, with an aggressive forecheck, penalty kill and willingness to put pucks on the net. With a 3-2 Penguins win, the Eastern Conference Final is down to a best-of-three as the series shifts back to Pittsburgh, tied 2-2.

“I thought [our players] had a readiness about them tonight that we have to find more consistency with,” said head coach Mike Sullivan. “This group has a knack for responding the right way to any of the adversities or the challenges this team has been faced with. We were playing on our toes; we were trying to play the game the way this team likes to play and gives us the best chance to win.”

The aggressive moves started earlier in the day, with Sullivan naming Matt Murray as his starting goaltender for Game 4. Murray had relieved Marc-Andre Fleury on Wednesday, stopping 19 of 20 shots in his first postseason action since being injured at the end of the regular season.

“We both know the drill; whoever’s not in there is there to support the other,” Murray said. “I think we have a really good relationship in that way. We just kept things light this morning when we were at morning skate, and I think that helped me a lot with keeping the nerves down and stuff like that.

“Flower is always good for that, knowing when to joke around and when to say the right thing. He’s been great with me in that regard, and I owe a lot to him for sure.”

After starting 11 forwards and seven defensemen in Game 3, the Penguins went back to the standard 12-6 configuration, with rookie forward Josh Archibald stepping in for veteran D Mark Streit. That lasted for most of the first period, when Senators forward Bobby Ryan hit Penguins blueliner Chad Ruhwedel in a vulnerable situation.

Ruhwedel was concussed and did not return to the game; he’ll be evaluated when the team returns to Pittsburgh. The Penguins played the remainder of the contest with five defensemen, and two of those made contributions to their offense.

“Any time a d’man goes down, it seems like we come together,” said defenseman Brian Dumoulin. “It seems like the forwards make that extra effort to come back and get the line and make it easier for us to change. It’s not easy playing with five D, but we’ve done it before. I think we did a good job of keeping our shifts short, just trying to get pucks out and keep the game simple.”

Less than a minute left in the 1st period and the puck was in the back of the net… Right when it Maatta'd. ???? pic.twitter.com/xvjWXZOOFN

“Feels awesome; it’s really exciting to score those goals in big situations,” said Maatta, who led the depleted defense corps with 24:58 of ice time. “I think we played a great game today. We started off well.”

A strong start is key against a 1-3-1 system like the Senators’. As Ottawa looked to get the goal back, the Penguins continued to attack and outshot the Senators, 35-26, on the night.

Pittsburgh captain Sidney Crosby had his most dominant game since sustaining a concussion in the last series versus Washington. He set up Maatta’s opening goal, led the all players with five shots, and drew the penalty that led to this power play, where he padded the Penguins’ lead to 2-0.

Crosby gets down on his knee to make sure the pass does not miss him and then buries the loose puck. This is why he's the best. 2-0 Pens. pic.twitter.com/lLqOb0ulBR

“Jake [Guentzel] saw me but I couldn’t tell where the puck was going to come from,” Crosby said. “So you just try to be as big as possible and try to knock the puck down; sometimes it’s rolling and not on your stick. Just hope you can keep it alive on the side of the net. I got a lucky break there; it was nice to see it go in.”

“He leads by example, and I thought he had one of his best games tonight,” Sullivan said.

By 11:30 of the second period, the Penguins got their third goal and all the offense they would need. It came from the unlikely stick of Dumoulin, who has just two goals through 163 regular-season games, but three in 45 playoff games.

It also came courtesy of the skate of Senators defenseman Dion Phaneuf. The Penguins’ Evgeni Malkin had some fun letting his opponent – who took out forward Bryan Rust with a hit to the head earlier in the series – know about it.

Puck goes in off the skate of Dion Phaneuf. Malkin turns around and makes sure he knows it pic.twitter.com/Lk7q1uGl9l

“It’s a fortunate bounce,” Dumoulin said. “I was just trying to put a puck back door and hope for some luck. Fortunately, it went in off Dion’s skate.”

Having the blueline pitch in on the offensive attack is an important aspect of the Penguins’ game, and one that has suffered in the absence of Kris Letang and, for the past two games, Justin Schultz.

“I’m not sure, if you asked me before the game, [Maatta and Dumoulin] came to mind,” Sullivan said. “But we’re thrilled for those guys and for our team. I thought we were just trying to play the game the right way and take what was given out there.

“I think it’s hard to generate offense in today’s game in the absence of your defensemen getting involved, whether it be off the rush or in the offensive zone itself. I thought our defensemen did as good a job as we’ve seen tonight along that offensive blue line, just becoming an option, making good decisions with the puck, helping us to sustain the offensive attack. And that’s going to be an important component of our game moving forward.”

The Senators battled back late. Winger Clarke MacArthur got on the board at 18:22 of the second, finishing a no-look pass from Bobby Ryan to the front of the net, and Ottawa had life.

Pittsburgh continued to make things interesting through the end of the contest.  The Senators’ Tom Pyatt chipped in a goal with 5:01 remaining, and it was a tense countdown to the finish for the Penguins and their fans. Especially when they had to kill their second too-many-men penalty with 34.3 seconds remaining.

But the Penguins’ aggressive penalty kill was up to the task, finishing off a 4-for-4 night. Murray stopped 24 of the 26 shots he faced, making Sullivan’s goaltending decision look like a good one.

“I thought he was solid,” Sullivan said. “He has a calm demeanor about him. I thought he was tracking the puck extremely well and, certainly, he made a couple of key saves for us at key times. We’re fortunate that we have the guys we have back there, whether it be Matt or Marc.”

Most of all, though, Pittsburgh had stepped up their compete level.

“I think our desperation was a little bit higher, and that’s something last game we felt wasn’t there,” Crosby said. “We got some good results.”

“I saw a lot of urgency on the part of the opponent, which was to be expected,” said Senators head coach Guy Boucher. “You know, they’re Stanley Cup champions, and they bounce back in every series. So that was to be expected.