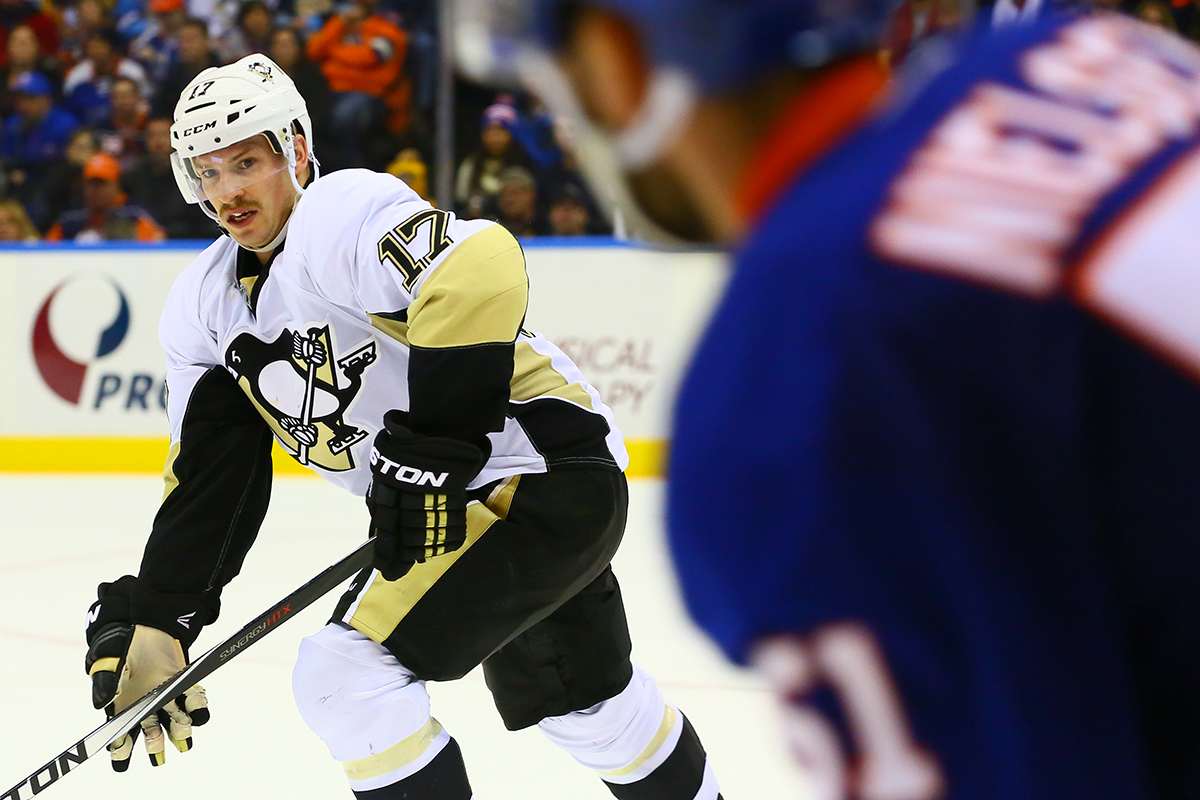 Depth Forward Comeau Making the Most of Top-Six Opportunity

With Pascal Dupuis sidelined for likely the rest of the season due to a blood clot in his lung, the Pittsburgh Penguins are scouting the trade market for a top-six winger. Pittsburgh has the luxury, however, of not being in any hurry to make a move or overpay for a player. That’s because they’re winning consistently enough to be in a two-way tie atop the Metropolitan Division, a four-way tie atop the Eastern Conference and a six-way tie atop the overall standings.

A big part of the reason the Penguins are in that position is their newfound depth.

Pittsburgh’s lack of forward depth was new GM Jim Rutherford’s No. 1 priority to address this summer, and he made an early splash at the NHL Entry Draft when he sent sniper James Neal to Nashville for Patric Hornqvist and Nick Spaling. The July 1 free-agent signing of Blake Comeau seemed small by comparison, but the versatile, 28-year-old forward on a one-year, $700,000 contract is making the most of his opportunity to play alongside Pittsburgh’s two world-class centers.

When Dupuis first went out of the lineup, Comeau filled in on the Penguins’ top line with Sidney Crosby and Chris Kunitz. Now, with Hornqvist and Spaling on Crosby’s wings, Comeau is playing with Kunitz and Evgeni Malkin, and he’s looked plenty comfortable with both sets of linemates.

Comeau registered a hat trick Wednesday in the Penguins 4-3, overtime win over the Toronto Maple Leafs. With an assist Saturday in Carolina, he raised his point total to 14 (8G, 6A) in 22 games – two shy of his 16 points with Columbus in the entirety of last season and on pace to eclipse his career-best 46 points (24G, 22A) with the New York Islanders in 2010-11.

“It’s interesting – when players come to a new organization and they get confidence, they get on a roll, it can sometimes change their fortune,” Johnston said. “At one time, he was a very good hockey player, and he’s had some bumps along the way, some ups and downs, and now he’s played really well for us. Just so consistent from day one.”

“I’m getting a good opportunity to play with some really good players, and it feels good to be able to contribute offensively,” said Comeau, whose overtime tally versus Toronto also had the distinction of earning Crosby his 800th career point. “It’s pretty cool that I could’ve been a part of that one as well.”

With Malkin, Comeau credited the early chemistry to good communication.

“He’s obviously one of the best players in the world, and he’s done a really good job of just talking with me on the bench, helping me out, letting me know where he is. He wants the puck, so any time he has it you know he’s going to make plays. So, I’ve either got to get open or go to the net and try to create some rebounds and havoc.”

That net-front presence – which is also one of Hornqvist’s calling cards – has been a key difference so far between the Penguins of this season and recent years.

“That’s an emphasis we’ve made as a team as of late,” Comeau said. “Everybody is just trying to create five-on-five chances. And, if you look around the league, a lot of the goals are just rebounds, getting those second and third whacks and just taking the goaltender’s eyes away.”

That willingness to work and do the little things well helped the Penguins eke out three, one-goal wins over the past week, beating the Boston Bruins, Maple Leafs and Carolina Hurricanes by that margin. Only a flat, 4-2 loss to Carolina the day after Thanksgiving marred the busy week of hockey, capping a busy month of 14 games. The Penguins won 10 of those contests, tying a franchise record for November.

“It’s tough to chase, so to get a good start, build that confidence and belief in the way you play is important, especially with so many new faces, a new coaching staff,” Crosby said. “It’s a lot of adjustments and it’s still a process, but to be able to go through November and play that well – and the schedule got pretty tough; we were on the road a lot – it’s a good way to answer [that challenge].”

With 39 man-games lost to injury this season – in addition to Dupuis, winger Beau Bennett is back on the shelf for approximately two weeks after an injury in Boston, center Marcel Goc missed Saturday in Carolina after blocking a shot with his foot, and defenseman Kris Letang also missed Saturday with a lower-body injury – the Penguins are relying on continued contributions from the depth throughout their lineup.

“Things are going well right now at the start of the season,” Comeau said. “I’m just looking to keep it rolling, keep trying to contribute where I can.”