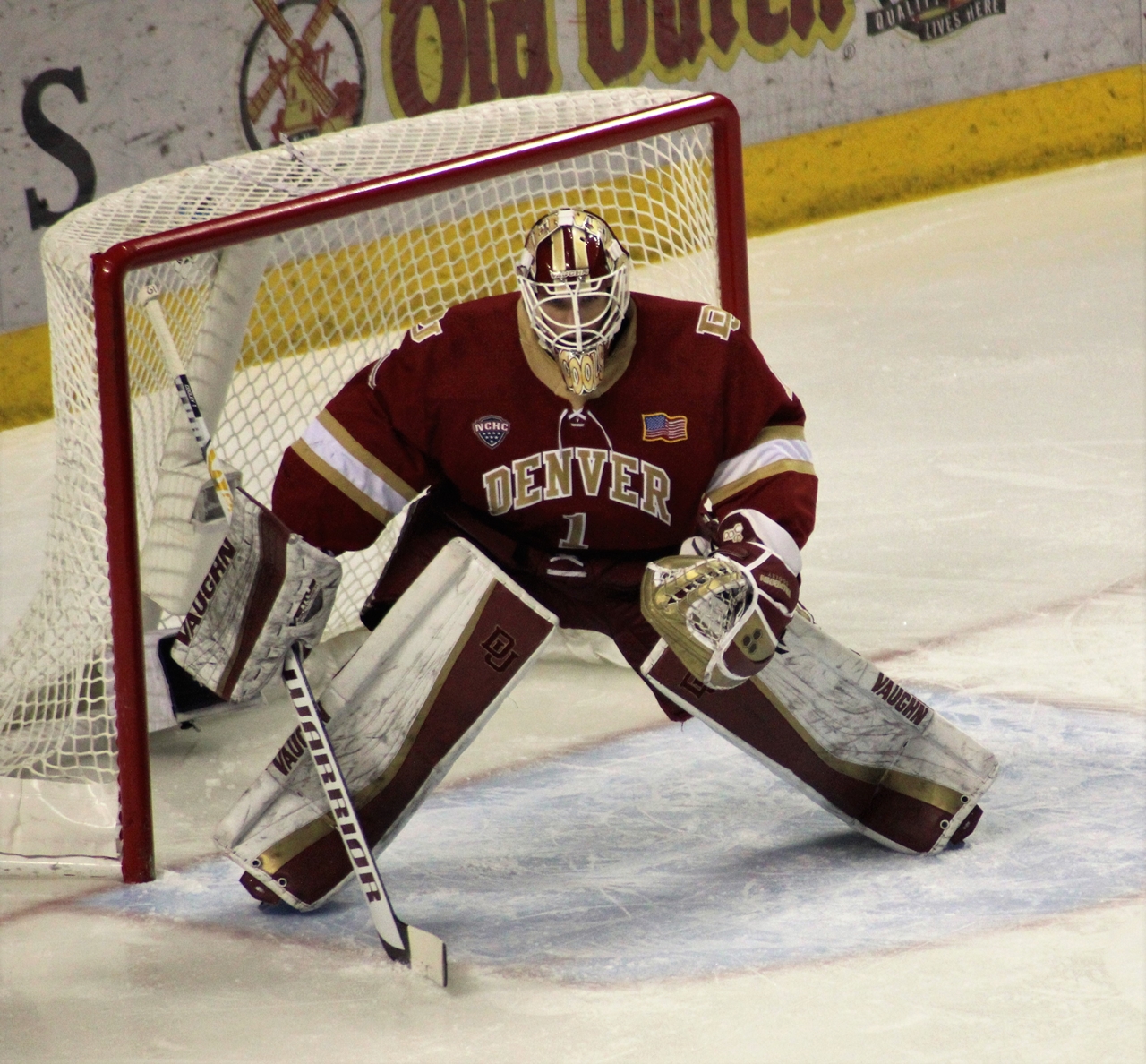 North Andover, MA — College Hockey’s holiday week began in earnest on Friday night. A series of tournaments and non-conference matchups brought the players and fans back to various college campuses after Christmas festivities. One northeastern non-conference matchup featured the 8th/7th ranked Denver Pioneers visiting the Merrimack College Warriors. These teams played last year in Denver, and Merrimack pulled off a surprising upset in their first-ever meeting with the Pioneers. On Denver’s first trip to Lawler, the Pioneers returned the favor.

Denver kicked off their second half with a bang. Michael Davies fired a shot from the left point and scored 12 seconds into the frame. Merrimack played their way back into the game’s pace with the frame’s only power play and transition offense. Devin Cooley was equal to the task, sweeping away all 11 shots the Warriors took on the Denver net. The Pioneers took their 1-0 lead into intermission.

Period two was markedly uglier than the first. The teams combined for five penalties and all of them produced power plays. Only the first one, a Logan Drevitch roughing minor, led to a goal. Liam Finlay caught Warrior goalie Craig Pantano out of position and deposited the puck into an open net on the left doorstep. Paantano stopped the other power play chances and remaining nine shots Denver took in the frame, but he did not get offensive help. Merrimack got only five shots in the frame and only one on the three power plays they had. Cooley stopped everything he faced, but Merrimack barely managed anything significant in the period.

The third was mostly more of the same. Merrimack performed poorly on the offensive end while Denver capitalized on chances to bury their prey. Near the midpoint of the period, Ryan Barrow charged up the right boards and sniped a shot inside the left post to extend the Pioneer lead to 3-0. Merrimack sparked a potential comeback late in the frame with the goalie pulled. Tyler Drevitch caught Cooley high in the crease and got behind the netminder to end the shutout bid. Cooley flashed the leather a few times to stop some would-be goals and secure the 3-1 Denver victory.

A particularly intriguing subplot in the game was the duel of Carles. Merrimack’s alternate captain, Alex Carle, played against his older brother, Denver’s Head Coach David Carle. The two are five years apart in age, and both clearly respect and admire the other.

David said of his brother, “He had the puck a few times at the point and I was hoping he wasn’t going to put the puck in our net. I’m really happy for him and proud of him. He played his 100th game tonight. He’s been through a lot in his career. Three major surgeries he had before coming here. I’m really happy he’s contributing here and wearing a letter as a senior.”

Alex said of the experience “Emotions are a bit heightened, especially with all the family in the building. We went to a ton of UAA games back home growing up in Anchorage, but we spent most of the time going to DU watching Matt (the eldest Carle) play. For me to be able to play in Denver last year was a dream come true. And for them to come out here and experience the other side was really cool.”

Merrimack drops to 4-13-1. Warrior Head Coach Scott Borek was optimistic in spite of the loss.

“Disappointed with the result, but I felt like our team played really hard,” Borek said. “I felt like we played hard for the whole game. I liked our effort and hated our result. If we score that second goal, you never know what’s gonna happen. All of a sudden, a team that thinks the game is over is on their heels. I told the team that I was encouraged by how we finished the game.”

Their next game is on New Year’ Eve, when they host the Colorado College Tigers. Puck drops at 4 pm ET at Lawler Rink.

Denver rises to 9-4-2. The Pioneers improve their road record to an even 3-3-0. David Carle explained his team’s road performance.

“It’s something we’ve talked about,” Carle said. “We’ve been at Air Force, at St. Cloud for two, and North Dakota for two. So they haven’t been easy road games. I think each time we’ve gone on the road, we’ve tried to learn something and take something away from it with our young group. We got a lot of road hockey here in the second half.”

They finish their east coast road trip on Saturday night with a duel against the Lowell Riverhawks. Puck drop is scheduled for 7 pm ET/5 pm MT at the Tsongas Center.