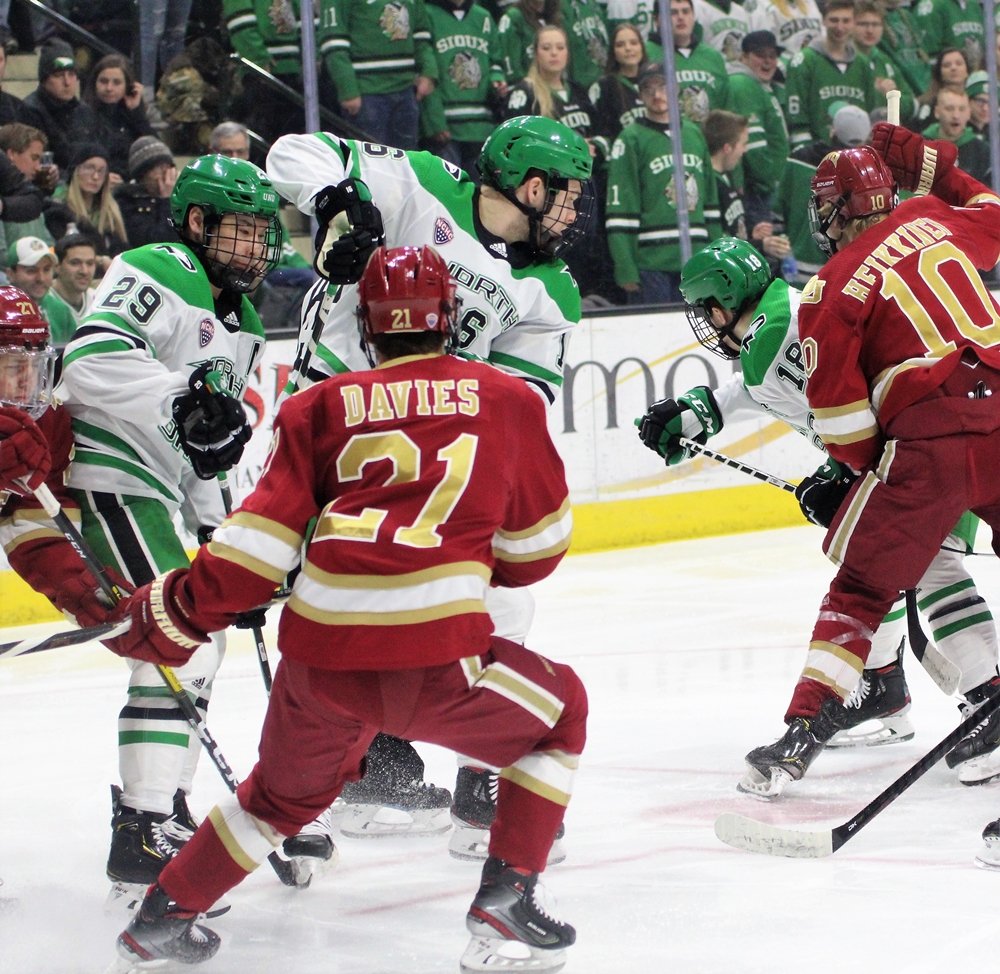 College hockey revolves around rivalries. In the National Collegiate Hockey Conference, North Dakota and Denver are heated rivals. In the past, I have compared the two teams to the Hatfields and McCoys. The two teams hate each other with a passioin. UND’s captain Jordan Kawaguchi summed it up the best.

“Obviously, we don’t like them, they don’t like us,” Kawaguchi said. “It’s gonna be a physical game anytime we play Denver. I thought they pushed back on us pretty hard, and we got to find a way to match that. I thought we did a good job, but we got to continue on tomorrow. Finish our checks and just play harder.”

Finally, when the game was out of reach, the Fighting Hawks broke through with a goal in the waning seconds of the third period. Freshman defenseman Tyler Kleven would score his third goal of the season, ruining Denver goalie Magnus Chrona’s shutout bid.

In the second period, Jake Durflinger and Justin Lee would score their first goals of the season, giving the Pioneers a 4-0 lead.

After last night’s poor showing on the ice, it’s going to be a long day for the Fighting Hawks.

“It’s going to be a hard morning tomorrow, obviously going over the video. Maybe a few meetings, talking about what we have to do, to get our minds right,” Kawaguchi said.

I don’t think it requires a lot of analysis. It’s kind of simple. UND didn’t play well. Head coach Brad Berry broke it down for the media after the game.

“I thought that was an urgent team in Denver,” Berry said. “I thought they played well. They came out hard after being off for a little bit. I thought we didn’t start on time, and I didn’t think we were sharp, especially in the first period. We turned some pucks over. That fed into their offense. They got a couple of goals off of that.

Magnus Chrona was strong in net for the Pioneers stopping 27-of-28 stops.

With the loss, UND ended a six-game winning streak.

Playing in his third career game, UND Newcomer forward Louis Jamernik picked up his first career point when he assisted on Tyler Kleven’s third goal of the season. Jamernik joined the Hawks after the Christmas break.

After struggling to score goals early in the season, the Pioneers have scored 10 goals in the last two games.