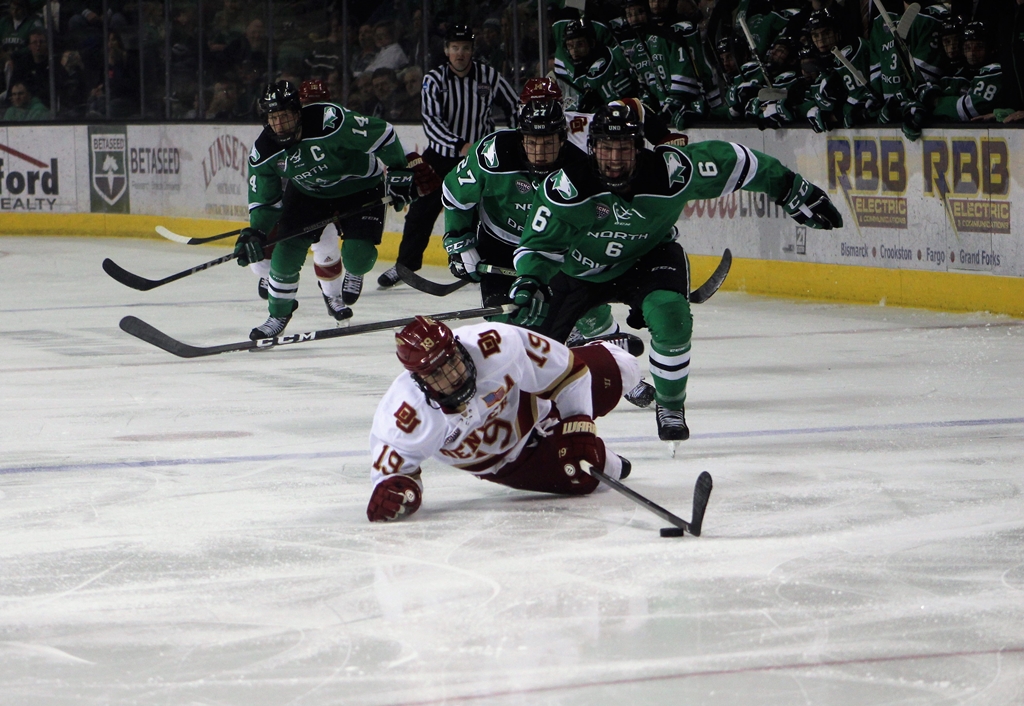 After spending the previous weekend series chasing the UMD Bulldogs up and down the ice, the University of North Dakota hockey team turned the tables on their next opponent. On Friday night, the Fighting Hawks came out in the first period and took the game to the first place University of Denver Pioneers.

Before the game was six minutes old, the Fighting Hawks had raced to a 2-0 lead with goals from forwards Cole Smith and Shane Gersich.

Early in the third period, the Pioneers would tie the game with a goal from senior forward Rudy Junda. Ironically, that was the second career goal for Junda, who was playing in only the 29th game of his career.

Then things started to get away from the Fighting Hawks. At the 03:14 mark of the third period, Cole Smith was assessed a five-minute major penalty and a game misconduct for hitting Pioneers defenseman Adam Plant with an elbow to the head. (Video of hit below)

UND caught a break shortly after. The Pioneers thought they’d scored the go-ahead goal at the 05:29 mark of the third period, however, forward Pioneers Jarid Lukosevicius interfered with the Fighting Hawks goalie Johnson, overturning the goal. Not to worry, Pioneers forward Troy Terry would score the go-ahead goal 27 second’s later.

Tonight's disallowed goal similar to Kawaguchi's in Denver. Both had players making unnecessary contact w/ goalie. Both would have gone in regardless. Both waived off. ? @russpi pic.twitter.com/9CeP6iGUxJ

The Fighting Hawks didn’t go quietly into the night and they kept working. Finally, with about 1:30 minutes left in the game, junior defenseman Hayden Shaw would score the game-tying goal.

“I got a pretty lucky bounce,” Shaw said. “That’s what happens there. Our forwards got pucks deep. Kind of forechecked hard. They gave me a little room. Guch (Jordan Kawaguchi) gave me a nice pass over and I just got a lucky bounce.”

The game was still tied after the five-minute 5-on-5 overtime. So, we played on more free hockey. At the 04:11 mark of the 3-on-3 overtime, Denver forward Troy Terry would score the game winner. For the Pairwise Rankings, the game will officially end in a 3-3 tie, but Denver will gain the extra point in the NCHC standings.

All season long, the Fighting Hawks coaching staff has emphasized getting off to quick starts and playing a full 60-minute game. After last weekend’s poor play, UND looked much better on Friday night.

“We came out the gates pretty well,” UND junior forward Joel Janatuinen said. “We played a really good first period. We played a great second period until they scored a goal. Then the game got away from us a little bit. Obviously, they tied it up in the third. But otherwise we played well, we just have to be stronger mentally. Just keep playing our game when we get scored on. I think that’s the key.”

After struggling the week before, the Fighting Hawks looked much better on Friday night. Head coach Brad Berry was pleased with his team’s improved play.

“Proud and pleased with the way they played – to start the game,” Berry said. “We had that attack mentality in the first period. Thought in the second, they scored that goal and then we kind of backed off a little bit. We didn’t skate as much. It gave room for them to create a bit more (offensive opportunities). But I think overall, having a two-goal lead, you want to win that game. We have to be a little bit more resilient in those games and go from there. We got a point out of it. We got the tie out of it. Tomorrow, we have to be better in the process to get the result we want.”

After giving up six power play goals to the Bulldogs, the Fighting Hawks penalty kill was much better on Friday night. Berry also touched on what his team did better against the Pioneers.

“Obviously (Cole) Smith is a big guy, the zone coverage that we have, he was in his spot,” Berry said. The defenseman comes in, he ends up shooting the puck and Cole was there. Like I said, is it a penalty? Probably a penalty. It was one of those things where he’s in his spot right there and that’s the way we cover. As far as an elbow or a shoulder or whatever it is. That’s for them to decide. We were in our zone for d-zone coverage.”