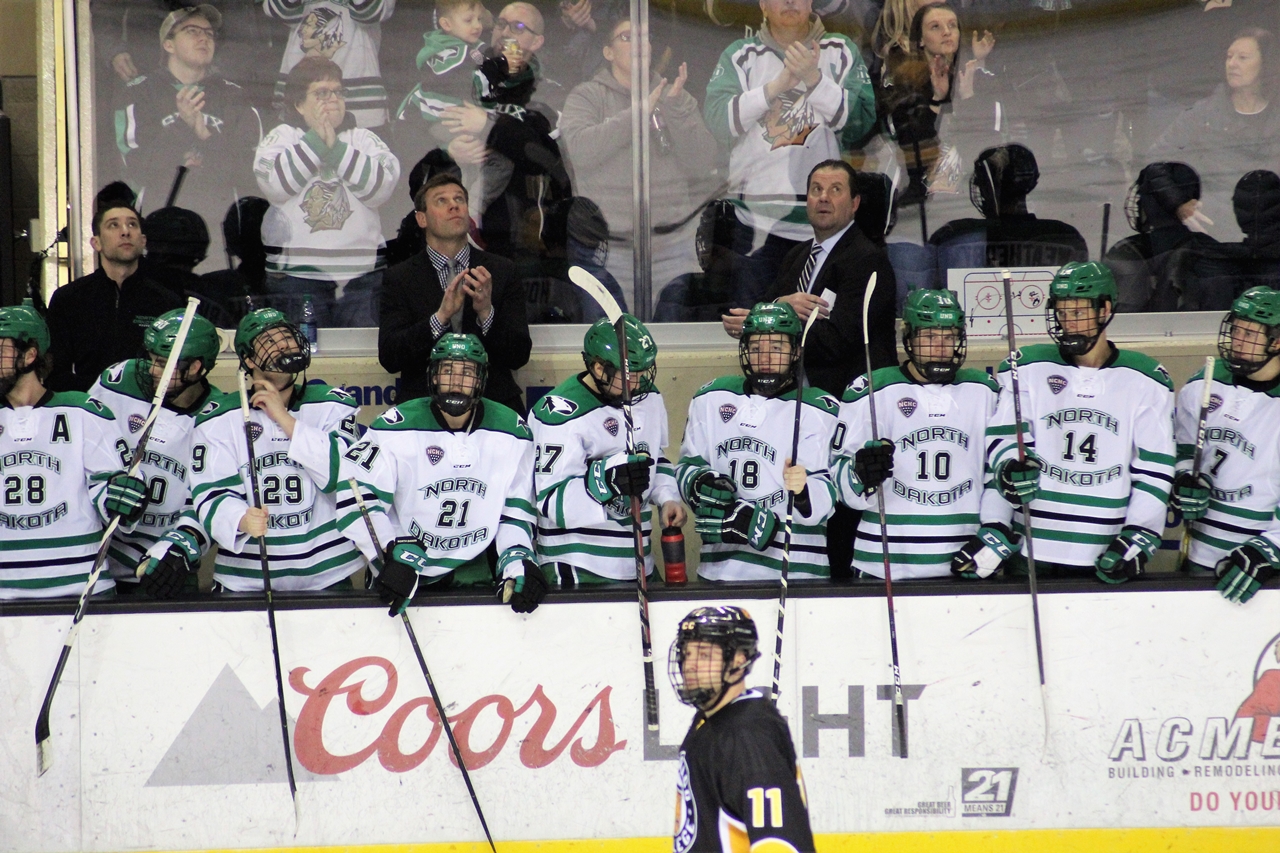 Grand Forks, ND – In the National Collegiate Hockey Conference, wins don’t come easy. When the playoffs arrive, NCHC teams are battle tested. Each series is a war. This past weekend was no different.

You couldn’t have written the script any better. On Friday night, the University of North Dakota hockey team raced to a 2-0 win before giving up three unanswered goals to the pesky Colorado College Tigers. After falling behind, the Fighting Hawks dug down in the third period and scored the game-tying goal to force overtime. UND would win the game with 44.8 seconds remaining in overtime to win the game.

Fast forward to Saturday night, it was déjà vu all over again.  UND again raced to a two-goal lead in the first period with goals from Hayden Shaw and Dixon Bowen. The Hawks carried the play and outshot the Tigers 12-6 in the first period.

In the second period, UND would begin a parade to the penalty box. That would kill the momentum the Fighting Hawks gained in the first period.

Just like Friday night, UND would cough up another two-goal lead, giving up a goal in the second period by Westin Michaud and a goal in the third period by Trey Bradley to tie the game. There was no panic on the Fighting Hawks bench. The two teams would trade opportunities and end regulation tied 2-2.

The Fighting Hawks wasted no time getting the game-winning goal. At the 00:50 mark of the overtime period, Jordan Kawaguchi scored to send the Tigers home winless on the weekend. When asked what he saw on his game-winning goal Kawaguchi had an interesting answer.

“Honestly, I blacked out,” Kawaguchi said. “The whole play before Nick came around the net is a blur to me. I don’t remember a lot. I just remember seeing the puck and just trying to get it towards the open net. Jonesy made a hell of a play.”

Not only did the Hawks have to beat the Tigers, but their starting goalie was battling a stomach virus.

“Got to tip my hat to Sheeler (Adam Scheel), he was puking this morning and last night so he battled up and he played a great game and kept us in that one, and we came out with the win,” Bowen said. “So, it was a huge weekend for us and we just got to keep that momentum and keep moving forward.”

Even though he was sick, there was no doubt in the room that Scheel was going to play on Saturday night.

“Yeah, I think we knew he was going to play,” Bowen said. “He just needed a little bit more rest in the morning. He must have gotten a bad bug last night, but it was good to see that out of him that was I was a good character weekend for our team you know we didn’t play full 60, but we ground it out and got the job done.”

While UND didn’t give any power play goals, head coach Brad Berry was concerned about his team’s undisciplined play.

“We had to learn from tonight as far as being undisciplined in the second period,” Berry said. “It’s not the way we play as far as being team first. We took a couple of penalties that were undisciplined. It’s one of those things where you got guys waiting on the bench to get on the on the ice. That’s the strength of our team when four lines are rolling and getting out there.