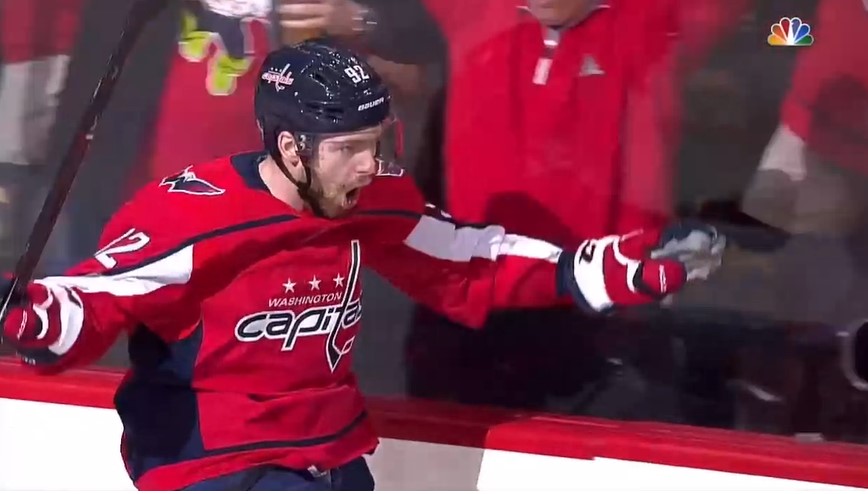 The Penguins might’ve played their most dominant game of the playoffs Saturday night in Washington, but they return home to Pittsburgh facing elimination.

The Penguins blew two one-goal leads, including surrendering a third-period lead for the second time in three games, and dropped a Game 5 that was theirs for the taking.

Pittsburgh came out with a strong, fast-paced first period, taking the lead just 2:23 in on a blast from defenseman Jamie Oleksiak. Pittsburgh led Washington in offensive zone time and scoring chances – but, starting with a momentum-sapping, late-period tripping penalty from Dominik Simon, the Caps surged back with a power-play goal from John Carlson, then another from Brett Connolly just 43 seconds later.

The Penguins shook off that 2-1 setback with their most dominant period of the playoffs. They outshot the Caps 18-5 in the second, led scoring chances 10-3 and scored twice on the power play to retake a 3-2 lead.

“The second period might be the best period we’ve played in a long time,” head coach Mike Sullivan said.

Captain Sidney Crosby and Patric Hornqvist had the goals, with Crosby’s coming off a shot from Phil Kessel, who found a way to fire the puck on net despite playing through an apparent upper-body injury.

But the Penguins would live to regret the opportunities they couldn’t bury past Washington netminder Braden Holtby, who kept his club in the game when the ice was tilted Pittsburgh’s way.

The third period started with a Penguins defensive breakdown just 52 seconds in, when top pair Kris Letang and Brian Dumoulin somehow ended up on the same side of the ice. It ended with the puck on the stick of Evgeny Kuznetsov and through the five-hole of Penguins goalie Matt Murray.

KUZNETSOV WITH THE EQUALIZER!

We've got ourselves a good one, folks! Join us on @NBC → https://t.co/eWhMX0gDvr #StanleyCup pic.twitter.com/VTFA3BFwK6

“I think we were both in between, and you’ve got all that speed,” Dumoulin said. “That’s something we’ve got to sort out. You don’t want to give that guy time and space like that. It’s just miscommunication, and we’ve got to be better than that.”

Pittsburgh seemed like a different team after that goal, as Washington took the play to them for much of the final frame. The Penguins got a point-blank chance from Dumoulin with less than five minutes remaining but, again, Holtby stood tall.

And then, as so often happens in hockey, the Capitals came the other way. Twenty-two-year-old Jakub Vrana, elevated to Washington’s first line during the game, took a pass from captain Alex Ovechkin and delivered the dagger with 4:38 remaining.

“That’s a tough play; Ovechkin’s coming full speed on his forehand,” Murray said. “I’ve got to make a better read there; be patient on the shot. He makes a nice play.”

“It’s tough,” Crosby said. “We did a lot of good things and felt like we could’ve won, but that’s playoff hockey. We had a great chance and it goes back the other way. That’s how close it is.”

A pair of empty-net goals from T.J. Oshie and Lars Eller followed, for a 6-3 final score that belied how close the game and the series have been.

“I think the series has been everything we’ve expected,” Crosby said. “It’s been tight, and tonight was a great example of that with the way the teams traded chances and, ultimately, coming down to that exchange with four minutes left.”

For the Penguins, there’s no more margin for error if they want to keep hopes of a three-peat alive. Monday will be the first time the back-to-back Stanley Cup champions have faced elimination in nearly two years, since Game 6 of the 2016 Eastern Conference Final against the Tampa Bay Lightning.

The stats are not on their side; when a best-of-seven series is tied, 2-2, the winner of Game 5 goes on to win 78.9 percent of the time. But the Penguins are an experienced playoff team, and they liked their game Saturday enough to feel good about their chances of bringing the series back to Washington for a winner-take-all Game 7.

“I think we can build a lot of confidence,” Sullivan said. “There was a whole lot of this game that we really liked. It might’ve been our best game of the series, and we didn’t come out with the result we’re looking for. But I know our group’s capable, and our players know that as well.

“We’ve just got to make sure we learn from the experience, put it behind us and get ready for the next one.”

“We’ve done it before; we know we’ve got it in this group,” Dumoulin said. “We’re going back home; we’ve been good at home all year. We win one game there, come back here and play a Game 7. It’s nothing new to us; we’re just going to bring our best effort again in Game 6.”