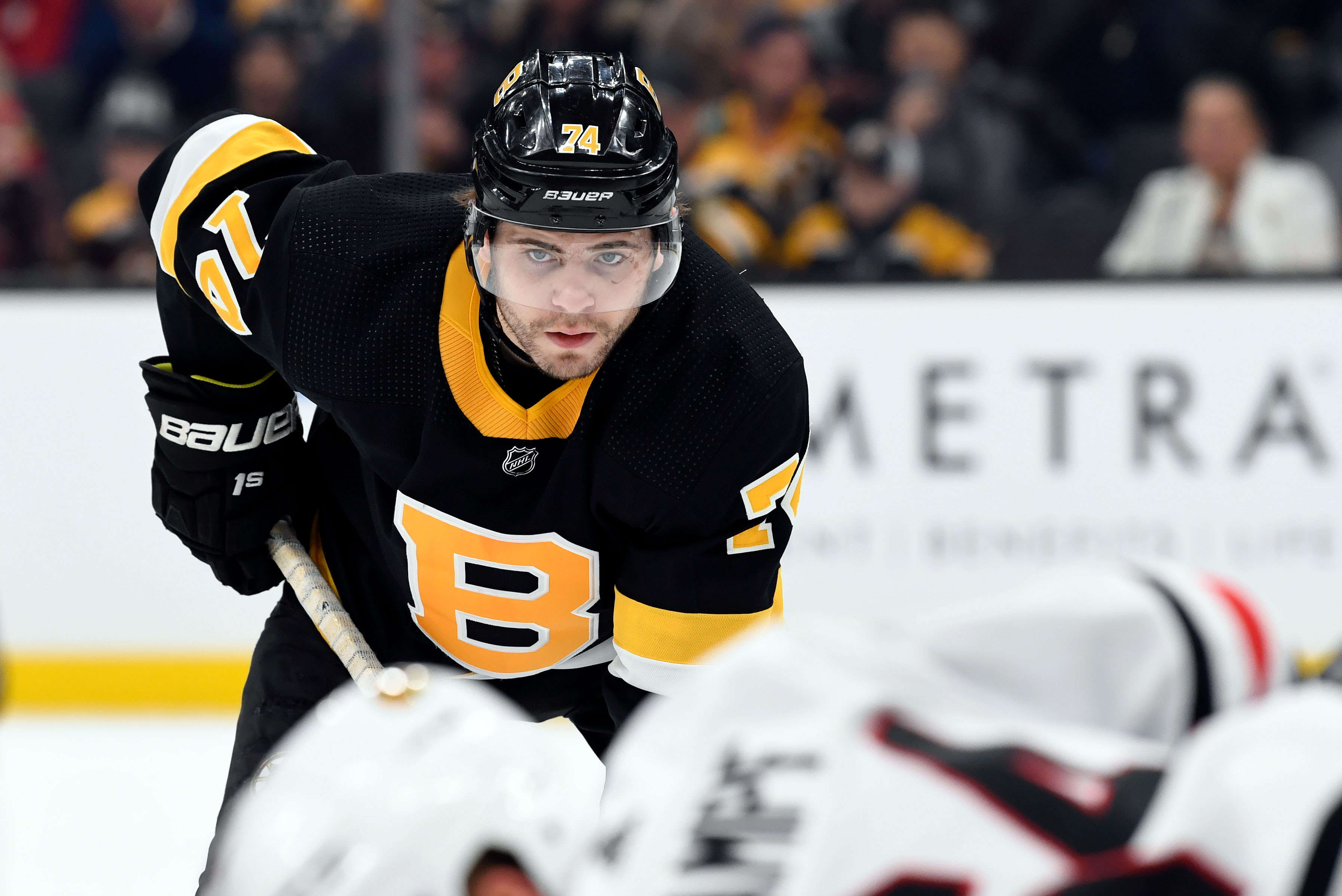 Boston, MA – Third-year forward Jake DeBrusk was benched early in the first period of Sunday night’s game between the visiting Buffalo Sabres and Boston Bruins. The former #14 overall pick in the 2015 draft heeded Head Coach Bruce Cassidy‘s message and responded in a big way in the third period. The Edmonton, Alberta native’s two goals just eighteen seconds apart proved to be the difference in the Bruins 3-2 victory over the Sabres in front of the 17,850 sellout at TD Garden.

Buffalo had the games first power play when the Bruins were called for Too Many Men at 2:50. The Sabres had two good bids during the man advantage. The first being a door-step stuff from Sam Reinhart that Tuukka Rask stonewalled at the post. The second one was a slap-shot from the left circle by Connor Sheary that Rask snuffed out.

Boston didn’t register a shot on goal until midway through the period and despite only putting two shots on goal for the opening twenty minutes, the second shot was the difference-maker. A head’s up play by Patrice Bergeron led to a two on one opportunity for linemates Brad Marchand and David Pastrnak. Bergeron jumped on the Sabres pass along the boards and dished to a streaking Marchand out of the Boston zone. Sabres defenseman Jake McCabe laid out on the ice but was too late to stop the feed from Marchand to Pastrnak. The 23-year-old’s wrist shot beat Linus Ullmark glove side for the 1-0 Bruins lead at 12:39.

The Sabres power play had another chance when Chris Wagner was whistled for Tripping at 16:35. A Victor Olofsson shot off the Crossbar was the best chance that Buffalo had on the man advantage as well as the entire period. Buffalo outshot Boston 7-2 as well as controlled the face-off dot 8-4.

The second period opened with a Tripping penalty on Buffalo’s Henri Jokiharju just fifteen seconds in when he took down Marchand. The Sabres were able to keep the NHL’s third-ranked power play to the perimeter of the defensive zone.

The Sabres took advantage of the Bruins defense being too aggressive. Matt Grzelcyk lost the puck deep in the Sabres zone leaving Charlie Coyle covering at the blue line. Coyle missed a check at the blue line resulting in a two on one for Reinhart and Rasmus Ristolainen. Reinhart fed Ristolainen for the one-timer in the lower part of the right circle. Rask made the pad save but his momentum carried him away from the puck, Zdeno Chara tried to tuck the puck under Rask’s pad but it still trickled into the Boston goal at 6:37.

Buffalo’s Jimmy Vesey would be sent off for Delay of Game when he put the puck out of play in the defensive zone at 11:02. The Bruins struggled to put pressure on Ullmark and the Sabres while on the man advantage. Rasmus Asplund had a short-handed chance after a Grzelcyk and the Bruins had trouble in their own zone.

Evan Rodrigues gave Boston another crack at the power play at 14:11 when he was sent off for Tripping. Buffalo was again able to stymie the Bruins power play. Again Asplund had a short-handed bid turned aside by Rask. Buffalo again outshot Boston 12-11, while the Bruins pulled back the face-off wins 13-8.

The third period had all the fireworks as Johan Larsson was called for two penalties at 1:23. A Tripping call and a Hooking call, with the hook coming during the delayed penalty. DeBrusk tipped a Steven Kampfer slapshot from the blue line past Ullmark at the left side of the Buffalo net making it 2-1 Boston at 2:37.

With Larsson still in the penalty box serving his second penalty DeBrusk barreled down the left side of the ice and fired a shot on Ullmark from the just above the goal line. Somehow the puck squeezed in between Ullmark and the post putting Boston up 3-1 at 2:55. DeBrusk’s 11th of the season was assisted by David Krejci and Kampfer.

Credit the Sabres for not quitting. With a delayed penalty coming on the Bruins the Sabres pulled to within a goal at 5:08. Curtis Lazar‘s second goal of the season was a rebound of a Ristolainen shot that Rask had gloved but was unable to hold on to.

The sAbres continued to pressure Boston and Rask throughout the third period. Just over halfway through the period, Lazar had scoring attempt sail just over the Bruins goal.

A Tripping penalty on Boston’s Brett Ritchie at 15:51 gave the Sabres another power play opportunity. Buffalo used their timeout and pulled Ullmark with the upcoming face-off in the Bruins zone. Rasmus Dahlin had a shot from the blue line with both Ristolainen and Reinhart in front of Rask but the veteran goalie was able to make the save and corral the rebound.

The game ended with some frantic play as Buffalo tried to tie the game and Boston tried to seal the win. Marchand had an empty net chance that skirted the side of the Sabres goal. Back at the other end, Buffalo’s Reinhart and Jack Eichel were assessed penalties at 19:43. For Reinhart, it was Slashing and Eichel was given a 10 Minute Misconduct. Buffalo outshot Boston 26-22 for the game while Boston had the slight edge in face-off wins 26-25.

“You want a response in some way, shape or form,” said Cassidy about the first-period benching of DeBrusk. “Two goals is a good response. Go to the net, shoot the puck, get in the shooting lane when you need to, take a hit to get a puck out. There’s details of the game that we expect. It’s a little bit about some of the messages with these guys now that have been in the league but are not the Marchand’s of the world. It’s a privilege to put on the Bruins sweater every night. And you might not have your A-game but you need to bring your B game to help the team win and be a good pro. That’s a little bit of the message in between periods.”

“I’ve done it since I been here anytime that things like that have happened,” said DeBrusk about responding to his coach’s message. “I just wanted to help. Maybe get some more offense going, win some puck battles. I’m just trying to figure out my game.”

“There’s lots of emotions going on,” added DeBrusk. “You care and you have pride in yourself. It’s one of those things you never want to happen as a player but usually, I respond pretty well. So obviously it was nice to get the two goals there. I feel like going to the net is what I wanted to do, it’s the best way to help the team out. It’s my job on this team to score goals.”

For DeBrusk his two goals have given him 4-2=6 totals in four of his last seven games. It was the fourth straight game that a Bruin has scored twice in a game.

“It was definitely a good feeling, it was my first multi-goal game of this year. To make it 3-1 I think overall it was just nice to finally get a little bit of a bounce there. It’s kind of funny how things work out sometimes.”