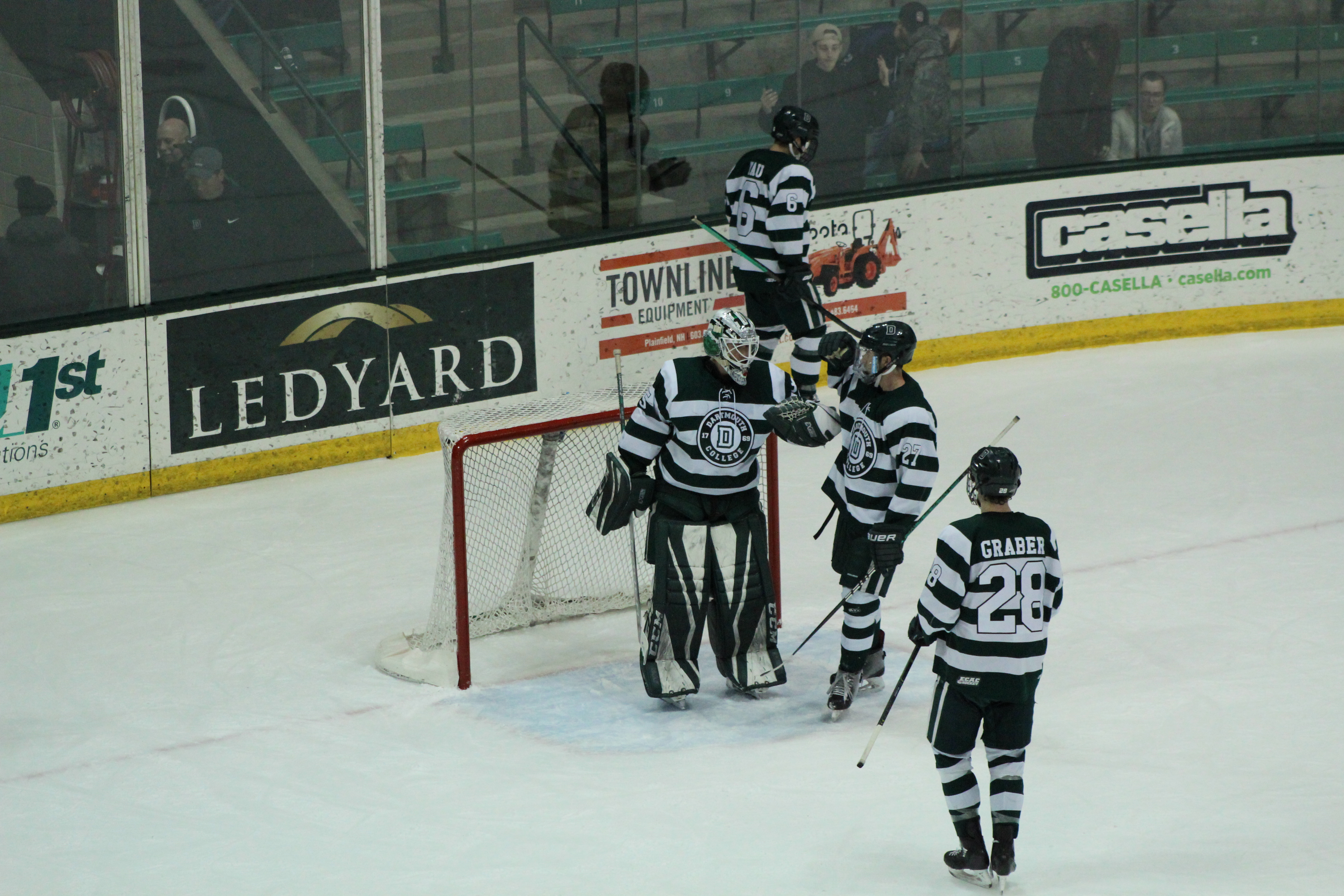 Dartmouth Holds On To Take Game One

Hanover, NH. —  For the second straight year the #12 seed St. Lawrence Saints travel to New Hampshire to take on the #5 seed Dartmouth College. The Saints have struggled mightily this year but did come into this game on a winning streak. They won their last game on Saturday against Colgate 5-2. The Big Green is also coming off of a 5-2 win of their own on Saturday, at RPI.

This one was all Dartmouth early, as the Big Green peppered starting goalie Emil Zetterquist with six shots before St. Lawrence managed their first shot of the game. That first shot, by Ryan Garvey, beat Dartmouth keeper Adrian Clark giving the Saints the early 1-0 lead at 6:33. The goal was set up by Carson Gicewicz and Cameron White as the Saints turned the breakout into a quick three on two up the ice.

The lead was short lived as Dartmouth tied it at 10:17 off of a nice set play on an offensive zone face-off. Will Graber won the drawback to Joey Matthews at the right point, Matthews fired a pass off the end board to Quin Foreman at the bottom of the left circle. Foreman found Drew O’Connor at the right post and O’Connor buried the puck into the SLU net. A High Sticking call on SLU’s Jacob Nielsen at 14:48 gave Dartmouth the game’s first power play. It only took Foreman thirteen seconds to poke home a rebound giving Dartmouth the 2-1 lead. The first period ended with Dartmouth outshooting SLU 19-5, but losing the face-off battle 15-13.

The second period saw SLU start off strong and hit the post around the three-minute mark. Next time down the ice for Dartmouth resulted in a Collin Rutherford goal. The sophomore wristed a shot by Zetterquist from the right circle at 3:40 for the 3-1 lead. With Dartmouth controlling the play most of the period, the Saints only mustered a few shots. On just their second shot of the period, a wraparound attempt by Dylan Woolf found its way by Clark cutting the lead to 3-2 at 9:45. SLU had a better showing as the period wound down, however, Dartmouth still controlled play and outshot the Saints 10-4. SLU continued outwinning the draws in the face-off circles.

The third period was a back and forth, up and down affair as SLU tried to tie the game. The Saints play had clearly picked up as their bigger players started to wear down Dartmouth physically. As much as it felt that SLU was in control the shots were still tied at seven apiece for the period. When Saints coach Mark Morris finally called Zetterquist to the bench for the extra skater SLU was unable to get good looks at the Dartmouth goal. This one would end with the Big Green holding on for the game one win, 3-2. Dartmouth outshot St. Lawrence 36-16 for the game.

Afterward, Coach Morris was disappointed with his team’s overall effort.

“I was hoping for a better outing,” Morris said. “We didn’t have a lot of jump in our step. I wish I could put my finger on it. We looked a little lethargic, had a couple of missed coverages there, that was the difference in the game. We gave up too many shots, got to play with a little more urgency, and got to hit the net more. We missed some glorious looks there in the third but shot them high and wide.”

Morris was encouraged by the team’s third period showing. “We played with more desperation, you got to do that from the drop of the puck,” Morris said. “We just, we have a young team. They’re learning, they’re learning the hard way and it’s unfortunate that we saw elements that we thought we’d cured. It’s the first time playing in playoff hockey for some of these guys but hopefully, we have a good response tomorrow.”

His counterpart Bob Gaudet was more relieved to have gotten out of that game with the win.

“It was a good battle,” Gaudet said. “They’re big and strong and tough. I thought our kids played hard. It wasn’t a game with a lot of flow, but we got a lead and we held on to it. It was a good first win. They (St. Lawrence) are a team that played really well, I thought they played really hard.”

The two face off again tonight at 7:00 pm at Thompson Arena on the Dartmouth campus.