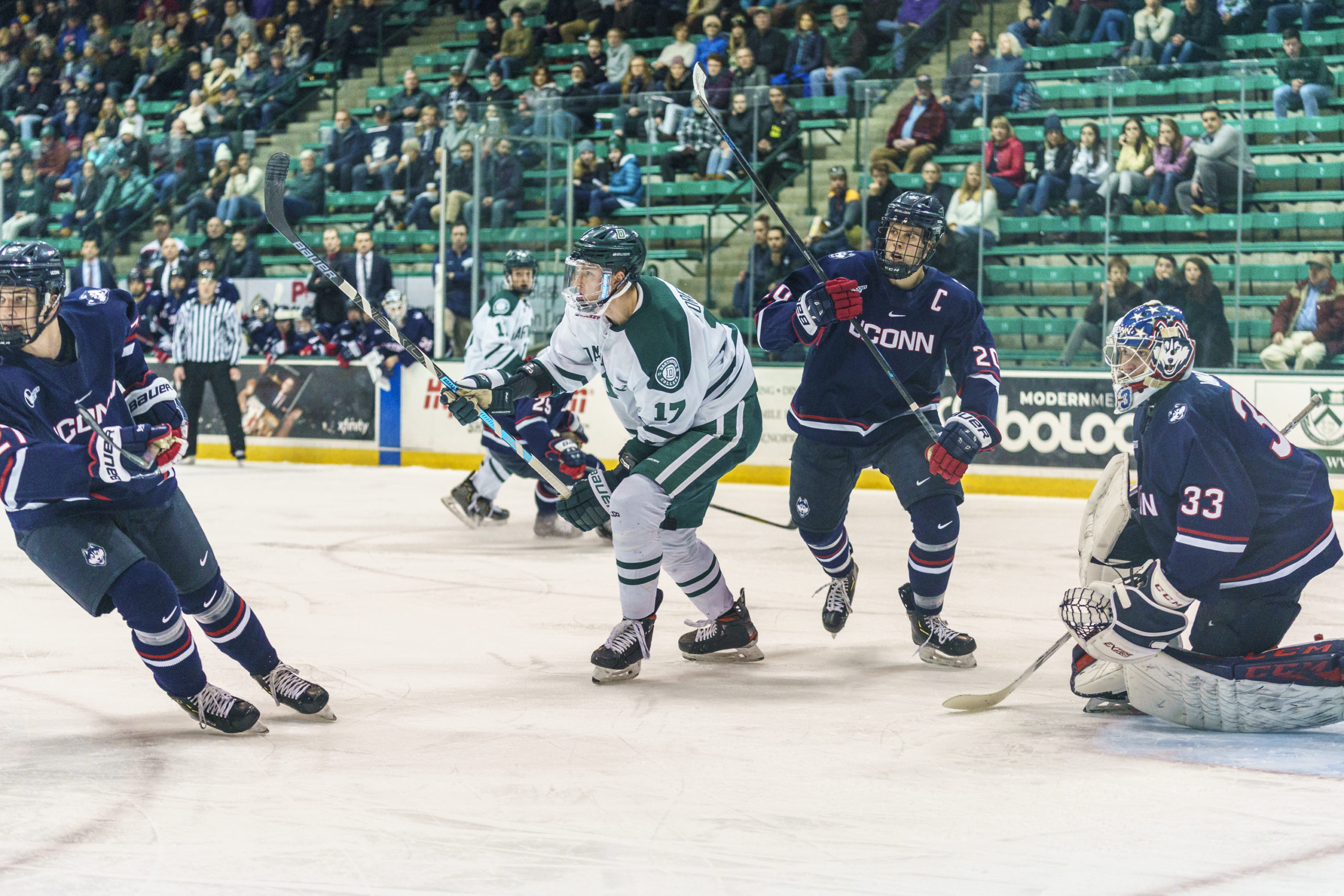 The Ledyard Classic Final between UConn and Dartmouth. Credit-Doug Austin

Dartmouth Comes Back on UConn for Ledyard Classic Championship

Hanover, NH- Dartmouth and UConn rode up and down first halves of their hockey seasons to near .500 records before Christmas. On Sunday night, the two matched up with the Ledyard Bank Classic Trophy on the line. Both teams showed their skill and potential for the stretch run, but only one team could claim the trophy at stake in Hanover.

The second period was an even duel. the Dartmouth offense woke up and drew first blood. Drew O’Connor won a face off to Quin Foreman who blasted a shot through UConn goalie Tomas Vomacka to take a 1-0 lead. The Big Green appeared poised to balloon that lead with Justin Howell sitting late in the frame for charging. But, Islander draft pick Ruslan Iskhakov got a short handed breakaway and deked out Adrian Clark to tie the fame with four seconds left in the period.

The momentum stayed with UConn in the third. Carter Turnbull potted two goals in the first 5:22 to give the Huskies a 3-1 lead. But then, Dartmouth got a few bounces and reclaimed home ice. First, Drew O’Connor drove the ice and handcuffed Vomacka with a wrister to cut the lead to one.

The game then turned on a curious use of replay. After a Vladislav Firstov holding minor, the Big Green rushed the net and forced the puck in. Initially, the play was ruled as no-goal, and no Dartmouth player on the ice or the bench was convinced they had actually scored. Upon review, the officials awarded Sam Hesler with the goal and the game was tied with 10:22 left. About six minutes later, Foreman carried the puck up in a 2on1. The junior from Needham, MA, stared down Vomacka and whipped a shot home for his second goal of the game, and third of the weekend for a 4-3 lead. Adrian Clark did the rest, turning away 17 of UConn’s 19 third period shots to complete a 41 save effort and a 4-3 victory for the Ledyard Bank Classic.

For his three goal weekend, Quin Foreman was voted the Tournament MVP. The other members of the All-Tournament Team were Chris Wilkie of Colorado College (4 Goals, including a Hat Trick in the consolation game vs St. Lawrence), UConn’s Alexander Payusov (had the game-tying goal against St. Lawrence) Carter Turnbull (2G vs Dartmouth, Shootout Winner vs St. Lawrence), Dartmouth’s Drew O’Connor (5 points on the weekend), and Dartmouth’s Adrian Clark (70 of 75 possible saves vs CC & UConn for a .933 SV%)

UConn drops to 7-7-4 with the loss. Tomas Vomacka stopped 23 of 27 shots in his first game back from the flu.

Mike Cavanaugh was disappointed with the outcome, but remained positive about his team. “It was a game that we played really well. I told the team, if you play like that, you’re gonna win a lot of trophies. I was very happy with the way we played. There were a couple bad bounces go against us. It’s hard to win trophies. You have to keep grinding and competing. I like our club. We haven’t played like this since I’ve been here. Where we dominated games for long periods of time. We’re a deep team. We’re gonna be good down the stretch.”

UConn returns to Hockey East play with home games against the Northeastern Huskies on Friday, January 3rd, and against the Merrimack Warriors on Tuesday, January 7th. Both games are at the XL Center and scheduled for 7;05 puck drops.

Dartmouth claims their 8th Ledyard Classic Title and first since the 2015 edition. The Big Green improve to 6-4-2.

“They (UConn) played hard and deserved a better fate,” commented Dartmouth Coach Bob Gaudet. “I thought our guys really hung in there. I didn’t like our start. When we get down, we have another gear which is a really good sign.”

What if I told you that a 3-1 deficit in the third-period meant nothing to the Dartmouth Big Green? Oh, you COULD believe me… or you could watch the highlights of tonight's comeback win to take the #LedyardClassic title to see for yourself.

“It’s almost better to win a game like this than a game 3-0 where you play well the whole time,” observed Tournament MVP Quin Foreman. “It’s bigger for the confidence than the win last night regardless of opponent. It takes everyone, not just a spurt of two minutes, it takes a long comeback for the whole third period.”

The Big Green resume ECAC play with the Princeton Tigers and Quinnipiac Bobcats visiting Thompson Arena next weekend. Puck drops at 7 pm ET for both games.