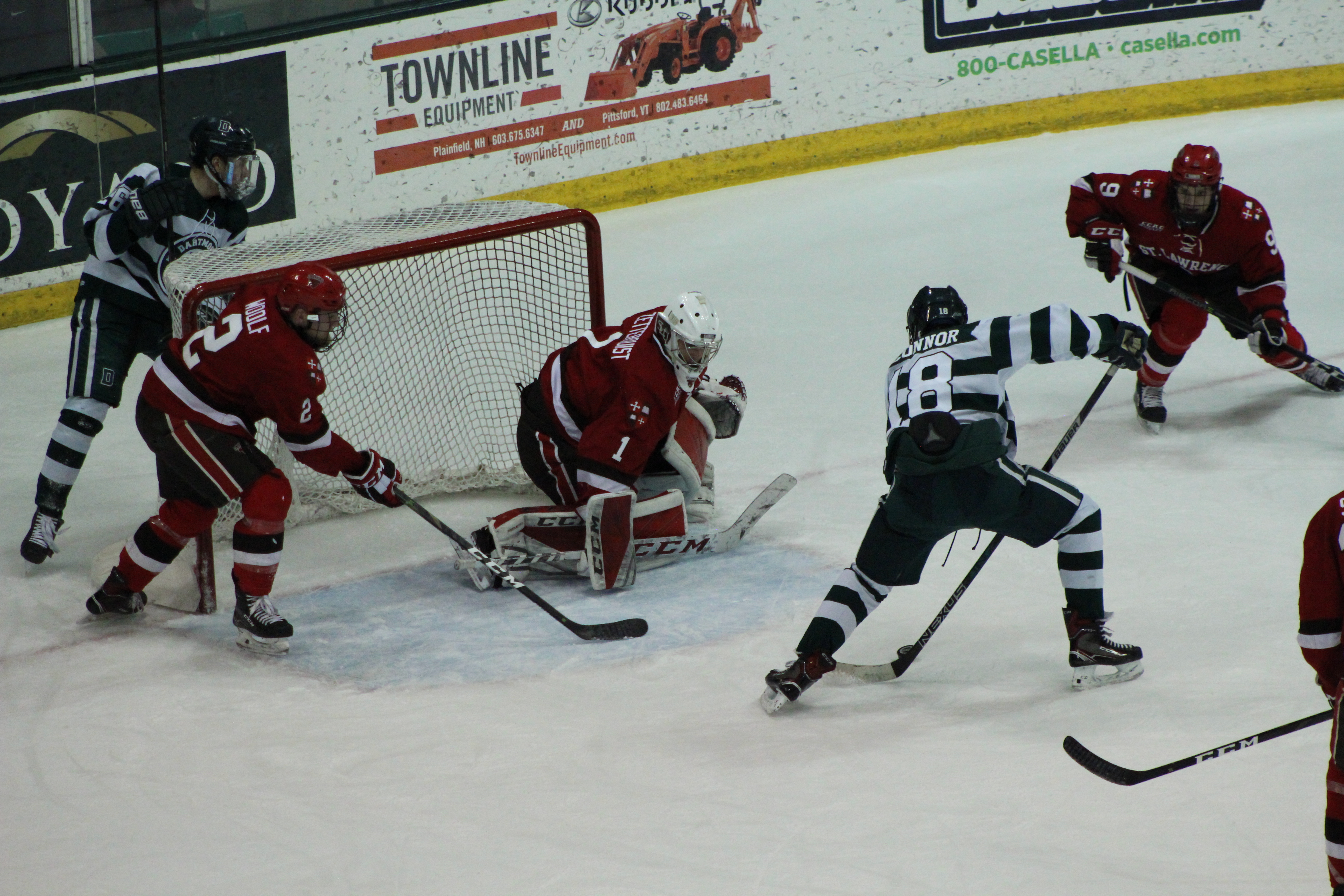 Hanover, NH. —  Win or go home for St. Lawrence and Dartmouth tonight at Thompson Arena. A Saints win sends the Canton, NY team to Hamden, CT. to face Quinnipiac. A Big Green win sees them off to Allston, MA. to take on Harvard. But first to the game at hand…

Coach Mark Morris’ club had the first power play opportunity of the evening when Ryan Blankemeier was whistled for Tripping at 3:25. SLU had good pressure for the first minute with their second unit. Dartmouth killed it with ease after the shift chance. The Big Green built off the shorthanded pressure and capitalized at 6:20 when Alex Jasiek, from the right circle,  wristed a shot off the post and in past last night’s hero Daniel Mannella for the 1-0 lead.

SLU had one shot to their credit through the first 12:00. This included the first half of their second power play of the period on a Jasiek Tripping call at 11:15. Bo Hanson had a shot from the point that Adrian Clark saved and Carson Gicewicz had a rebound chance go wide. The Saints had strong pressure towards the end of the period. Dartmouth answered with pressure of their own to close out the final minute of the period. SLU outshot Dartmouth 11-8 and won the face-off battle 12-10.

The second seen Dartmouth waste little time building on their lead. Just thirty-seven seconds in Will Graber walked out from behind the SLU net and backhanded a shot bar down over Mannella’s shoulder for the 2-0 lead. At 1:13 matching Roughing penalties on SLU’s Kaden Pickering and Dartmouth’s Brendan Demler led to four on four action for two minutes. Interference was called on Philip Alftberg at 3:53 which gave Dartmouth its first man advantage of the evening. Slick passing from Matt Baker to Quin Foreman set up Graber for his second of the game at 4:17. Baker fired a pass down low to Foreman, who from the right post, fired it across the crease to a wide open Graber for the 3-0 lead.

4-0 happened at 6:24 when Jeff Losurdo poked in a lose puck that managed to sneak out from under Mannella’s pads. This resulted in a goalie change as Manella exited for Emil Zetterquist.  SLU’s Bo Hanson was assessed a 10 minute Game Misconduct at this time too. At 12:01 Drew O’Connor scored a power play goal when he redirected a Cameron Roth pass past Zetterquist for the 5-0 lead. Less than two minutes later with Zach Risteau in the box for Slashing, Foreman added insult to injury when he knocked home a high-low pass from Graber. 6-0 Big Green. A date with Harvard next weekend was beyond inevitable at this point. The period ended with Dartmouth outshooting St. Lawrence 20-2 and won the draws 15-14.

The third picked up where the second left off, when Blankemeier poked home a lose puck at 2:04. At 11:09 a two on one with Dartmouth’s Jasiek and Shane Sellar resulted in the Big Green’s eighth goal of the night when Sellar slapped a Jasiek feed past Zetterquist. Mercifully the season ends for St. Lawrence. The Saints went 6-29-2 on the year. The Saints end the year with most losses in an ECAC season. It was a rebuilding year for the program. It’s a young team. Time will tell if they can reach the heights that SLU is accustomed to.

As for the Big Green its on to the Quarterfinal round and a trip to Harvard. A repeat of last season’s #4 vs #5 match-up. Adrian Clark broke the Dartmouth single season shutout record with his sixth of the year. A record that stood for nearly a century. The Big Green had four point nights from Jasiek and Foreman, as well as three point nights from Graber, Losurdo, and Matt Baker.

“We got unraveled,” Saints head coach Mark Morris said. “That’s a pretty good sign of a bunch of Freshman and Sophomores. They laid it all on the line last night, and didn’t have a whole lot of focus today. Hopefully that one stings long enough that they use it as fuel for the future.”

“Tonight we got the bounces that we hoped to get,” said Dartmouth head coach Bob Gaudet said. “It was one of those games, we play them again it would be a one goal game I think.” Coach went on to say that “I think the second goal, actually, was a crucial goal for us. It was just a ridiculous play by Graber. Just a ridiculous play. Off the back of the net, then into a three inch square spot. It’s just ridiculous. Big time. The guys played really hard, I’m proud of them.”

Dartmouth plays Harvard Friday and Saturday at 7:00 pm, with a Sunday tilt if necessary. The two teams split against each other this year. Dartmouth won 7-6 in overtime in Hanover. Harvard won 4-1 in Allston.