The annual opening of NHL free agency on July 1 has become the busiest day of not just the offseason but the entire year, when it comes to player transactions. It’s a day in which Brian Burke has said GM’s make some of their worst mistakes. Of course what else can you expect when 30 (now 31) teams bid on the services of tier-2 and 3 free agents?

The decline of big name free agents has been evident in recent years and 2017 is no exception. Nonetheless, there will be buyers and there will undoubtedly be mistakes. Such is part of the tradition that is July 1. But who is this summer’s best buys amidst a largely second-tier crop of unrestricted free agents? And how much will it take? And maybe more importantly, what will the term be?

While Thornton’s beard has stolen the show over the last few seasons, he shouldn’t be forgotten as one of the best (maybe the best) in a weak free agent class. Though he was limited to 50 points last season, the lowest point total over a full season since he was a 19-year-old with Boston, he’s an effective center trying to make John Tortorella eat his words. Talk about motivation.

And again, the decision of Marleau will affect what Thornton does. I think if Marleau re-signs in SJ, so does Thornton….

As hard as it is to remember him clean-shaven, it’s just as difficult to fathom him not in teal. He and the Sharks are reportedly off on term. Since 2005 he’s signed four-consecutive three-year contracts and he’s looking for another. This could be put to rest before Saturday, particularly if his longtime friend and teammate, Patrick Marleau signs back with the club. But make no mistake, there’s interest in the veteran. With two days before free agency, it’s also a unique experience for Jumbo Joe, who has never gotten this close to being a free agent. He may want to take it all in. He’ll want to play for a contender, which might equal lowering his ask to two-years. Beyond the obvious, he’s a presence in any locker room he joins and that stuff is still important. Will he or the Sharks blink before noon-Eastern on Saturday?

Like Thornton, Marleau and the Sharks have yet to come to terms. The second overall pick from 1997 wants to return to the only organization he’s ever known and finish his career. At 37, he’s still scoring after a 27-goal season and owns nearly every record associated with NHL and the Bay Area. Much of what he decides may impact Thornton, too. The duo have been playing together for parts of 12 seasons and aren’t eager to break up the band.

Marleau will have plenty of teams interested in his services. He hasn’t missed a game in eight seasons and is still a capable top-six winger on any NHL roster. Though it’s not a long-term plan, there’s no shortage of teams wanting to add skill to their lineup. A veteran of almost 1,500 games, he’s got one blemish on a terrific resume and figures to want to play for a contender next season in pursuit of it.

When Shattenkirk refused to sign an extension with the Lightning last season he put the kibosh on a trade that could have yielded Jonathan Drouin in return. He also not-so-subtlety indicated he wanted to go to free agency for the first time in his carer. Ultimately, the Blues dealt him to the Caps as the final piece in what they thought was the recipe for success en route to the cup. As it turns out, it was another second-round disappointment at the hands of the eventual-champion Penguins. Washington’s 8-year, $46 million extension to T.J. Oshie made it clear the team will not be re-upping the defenseman, who leads all pending UFA’s with 56 points last season.

You can talk about the defensive liabilities in his game,  but Shattenkirk produces and generates loads of offense from the blueline. After his trade to Washington, he was held without a shot-on-goal just four times in 32 games including playoffs. He also posted three or more shots in 16 of those contests while averaging over 20 minutes/game in ice-time. At 28 and based on position, he’s the most coveted free agent ahead of Saturday and is the most likely candidate to get a max seven-year term. He’ll also be looking for a team that can make him the go-to guy. There will be more than enough interest come July 1.

There were some questions when Radulov signed with the Canadiens in pursuit of an NHL comeback after a not-so-graceful exit from Nashville in 2012. What followed was a 54-point season that was second on the team in scoring and one of the few sources of offense on the team. They want him back, but not at the reported term and dollars he’s been asking. But as is usually the case, someone will pay it.

Hearing that Radulov's latest contract ask was six years at $7 M per season. No way Habs do that…

Will the great fit with the Habs make Radulov change his mind? I wouldn’t bet on it. High-end skill, power forward-type game and producer, he’s in line for a bump on his $5.8 million from last season. The issue at hand already appears to be term for a 30-year-old. There’s no denying he possess a package of skill that might not exist in any other available free agent. To the same token, he owns a track less than admirable track record. Enough to keep some teams away from a long-term contract. Once the clock strikes 12, there will be teams willing to roll the dice.

Was there a better get last offseason than Vrbata at one-year, $1 million while contributing 55 points in 81 games? He was the leading scorer last season on a dreadful Coyotes team. How bad were they? There was a 16-point gap between himself and second leading scorer, Oliver Ekman-Larsson. On a better team he might not average nearly 17 minutes of ice-time, but might be able to have an appreciable impact.

The season was a nice comeback for his third stint with the Coyotes. He tallied a career-high 35 assists and notched the 50-point mark for the fifth time in his career. It was a great get for the $1 million the team initially signed him for, expecting he could mentor some of the young forwards in the organization. Instead, they missed time due to injury while he played in 81 of 82 games. There’s no doubt the winger has enjoyed success in the Desert, but with Shane Doan and Dave Tippett among the offseason departures, Vrbata may have to play elsewhere. That’s not a bad thing. To his credit, he played himself into a marketable player. 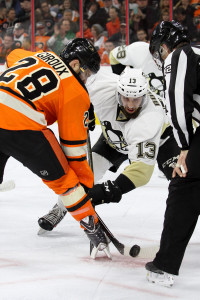 Now a two-time cup champion, Bonino appears to be heading to free agency after two seasons with the Penguins. A reliable third-line center, he’s also proven to have some scoring pedigree and is no stranger to the big goal in big moments. There’s a lot to like about the 29-year-old’s game. And who doesn’t need a good center?

With center-ice depth so important, Bonino will be among the hottest free agents come noon on Saturday. That long line of teams looking for his services likely means his $1.9 million AAV from a year ago should rocket up steadily. Not yet 30, he’s also in line for teams to take a greater risk on term. In short, everything about this weak free agency class is turning up Bonino. This will be his best chance at cashing in on free agency, he’s in a position of strength.

What else is there for Justin Williams to accomplish in his career? He’s the owner of three Stanley Cup’s and a Conn Smythe. He’s Mr. Game Seven in the postseason–seven goals, 14 points and up until this postseason was undefeated in game 7’s. There’s no question he wants to win again, but in what could be his last NHL contract the focus on fit might have added importance.

He’s 35 and coming off a season in which he posted 48 points in 80 games. He’s a versatile and durable player with goal-scoring abilities. Teams will come and if he can be had at a deal like the one inked with Washington in 2015, there will be one happy team this weekend. His career body of work should put him in line for some dollars. Might term be an issue? It usually is for the 35+ crop.