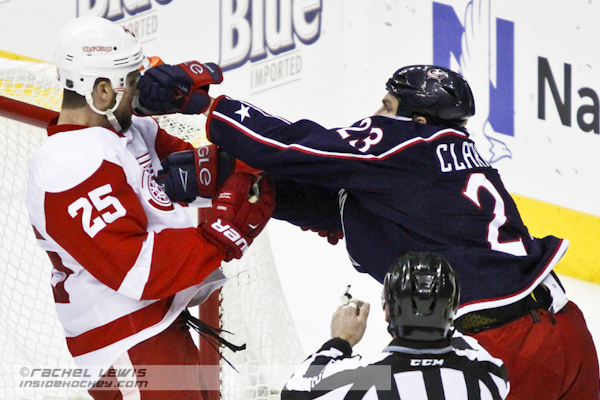 Could There be a David Clarkson-Devils Reunion?

David Clarkson’s playing career appears over. This according to a March report from Columbus Dispatch writer, Aaron Portzline. After suffering chronic back issues, the veteran of 10 NHL seasons has taken up coaching high school hockey. With three years left on his contract that carries a $5.25 million cap hit, Blue Jackets GM Jarmo Kekalainen will be eager to move him and help clear some space. Perhaps the New Jersey Devils, who Clarkson began his career with, might be interested in a reunion of sorts.

Told #CBJ RW David Clarkson, whose career is likely over due to chronic back injury, will be varsity head coach at Upper Arlington HS.

On his most recent episode of his podcast, the ‘Bobcast,’ TSN Hockey Insider, Bob McKenzie ran through several teams in the NHL and what they could do this offseason. One of the teams he discussed were the Devils.

“Keep your eye on the New Jersey Devils,” McKenzie said. “We talk a lot about Vegas being a dumping ground for big contracts and reaping rewards of taking incentives to take on some bad contracts, I won’t be surprised if (the Devils) are in the same sort of mode.”

The Devils are no stranger to this kind of process. Last summer they acquired the final year of Marc Savard’s contract from Florida along with a second round pick in this June’s draft. In exchange, New Jersey sent back a pair of AHL forwards, Graham Black and Paul Thompson. The move enabled the Panthers to clear some cap space in order to sign Keith Yandle to a long-term deal while giving the Devils some $4 million in cap dollars to help reach the cap floor.

With north of $21 million in cap space, New Jersey could again pursue this avenue. They have just two noteworthy restricted free agents in forward, Beau Bennett and defenseman, Damon Severson, plus would still have enough space left to explore the trade and free agent market. But with three years remaining, are the incentives worth it?

The Blue Jackets presently have all of their own picks in both the 2018 and 2019 drafts, according to Cap Friendly. They hold 6 of their initial 7 picks in this month’s draft after transferring their second-round pick to Vancouver as compensation for signing John Tortorella last season. The Devils have 11 picks in this year’s draft, 9 in 2018 and 7 in 2018.

GM Ray Shero has used picks in back-to-back drafts to help acquire forward depth. In 2015, he sent a second and third to Anaheim for Kyle Palmieri and in 2016, he acquired Beau Bennett from Pittsburgh for a third rounder. Adding more picks in future drafts to play with would certainly be of interest.

And if Shero is interested, you can bet the cap-strapped Blue Jackets would be, too.

Coming off a franchise-best 108-point season they have just over $2 million in  cap space, according to Cap Friendly. Restricted free agent forwards, Josh Anderson and Alex Wennberg are up for new deals and the club would like to bring back unrestricted free agent, Sam Gagner as well.

The three years could be too much for the Devils to take on, especially if they see themselves as a competitor before the contract expires. But with all the craziness surrounding the expansion draft ahead, there could be enough urgency to intrigue the Devils.