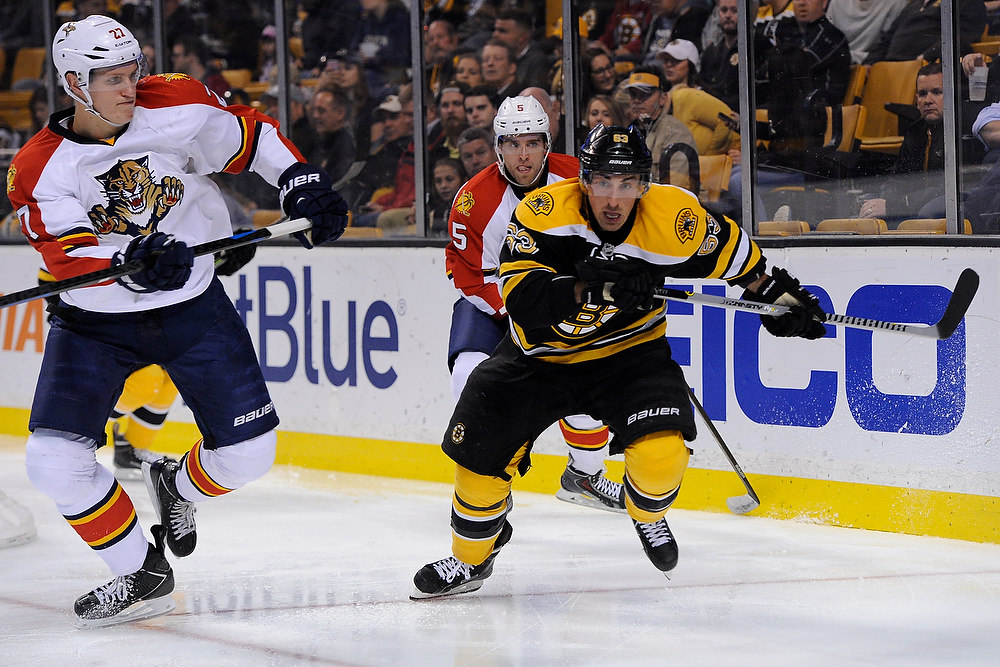 BOSTON—Just think, six months ago we were anxiously awaiting the arrival of the 2015-16 season to get underway for the entire National Hockey League.

With the shellacking that the Winnipeg Jets gave to the Boston Bruins on opening night (and the subsequent losses to divisional opponents that followed), the year looked bleak. The fact that the team could miss the playoffs in back-to-back years for the first time under this regime seemed like an occurrence that was destined to happen.

Although nothing has been clinched at the moment, the Bruins are right in the thick of things and they look to secure the Atlantic Division crown as we approach the final two weeks on the hockey calendar.

The B’s are currently in the midst of a bit of an odd stretch in their schedule. They recently concluded a four-game road trip that sent them out to California for three of those tilts, a trip that left the B’s empty handed as far as points. Another four-game trip is on the slate for a team who possess one of the best road records in the NHL at 23-11-3. However, they returned home for one night sandwiched in between those eight games.

And that brings us to Thursday night, where the Black and Gold played host to the Florida Panthers in what was their final meeting of the season. Boston was looking for the perfect 4-0-0 record against the Panthers on this night as well as cutting into the three-point cushion the Panthers possessed over the Bruins.

It is almost flabbergasting to think that by the time the season concludes, the B’s can have three 30-goal scorers in Patrice Bergeron, Brad Marchand, and Loui Eriksson. The newly-acquired depth picked up at the trade deadline gave the B’s the necessary balance they need if they get into the postseason.

Before that happens, they must fend off the Panthers in the chase for first place in the division with an important two points on the line. To increase the pressure, the Bruins were just one day removed from a grueling game with the New York Rangers. The road to the postseason is a resilient one.

B’s head coach Claude Julien was honored prior to puck drop for his recent milestone that he achieved for most career wins in franchise history. He surpassed Art Ross on March 7 by locking up his 388th win coaching behind the bench in Beantown.

“It is a tremendous honor to be recognized like that,” said Julien regarding the honor. “I have had a lot of support from upper management as well as the fans and I am fortunate to have coached some great teams during my time in Boston. I feel truly humbled.”

Once the season is over, Julien and his family will be heading to Disney World. Hopefully, that will not happen until the end of June. Hockey is priority, and he will surely agree with that statement.

In the first period, these two rugged teams were matching each other in the physicality department. What was not being matched up was the number of scoring chances set up by the Bruins. They were aggressive in the offensive zone and did not allow Florida much time to recoup in its own end. The persistency of the B’s drew a couple of minor penalties, in which we saw some new-look units on the power play. Although both chances with the man advantage were unsuccessful, the Black and Gold established a presence. The game was scoreless after the first 20 minutes where Boston out-shot Florida by a 15-5 margin.

“We came into the game ready to go,” said Matt Beleskey. “We were definitely a focused group coming into this game and we just wanted to get off to a great start. Getting some time on the power play was good because I wanted to help the team in any way that I can.”

As the second period progressed, the flow remained inconsistent early on. Once the B’s had the opportunity to get the right matchups on the ice, they seized control of the game. Ryan Spooner netted the first goal of the contest after an offense zone tour by Frank Vatrano caused the open spot for Spooner to blast the puck past Luongo. The Panthers surged after they fell behind, which led to the equalizer. Old friend Reilly Smith was the goal scorer for Florida, his 24th tally of the season. Late in the second period, Vincent Trocheck put the Panthers up 2-1 on a short-handed breakaway.

With the Bruins trailing entering the third period, it looked like the home team gave their fans a reason to cheer as it appeared they tied the game on a tip in by Bergeron. However, video replay negated the goal and that sent the TD Garden into jeers. The air was completely let out of the building and on the Bruins bench.

“It looked pretty clear that the puck was over the line,” said Marchand. “It is very frustrating because it would have been a 2-2 game and we would have had the momentum.”

No team is going to come back and win a game like that after being deflated in that manner. Nonetheless, the B’s fell on home ice to the Panthers by a final score of 4-1 and are currently on a five-game losing streak. Boston is now five points behind Florida in the Atlantic Division.

“We have been through a lot this year and this should not affect how we play the rest of the way,” said Spooner.

The Bruins will hit the road beginning on Saturday night against the Toronto Maples Leafs.

Side Notes: Frank Vatrano was recalled from Providence earlier in the week. He has skated in over 30 games this year for Boston and scored seven goals…This was the second leg of the team’s final back-to-back set of the season…Goaltender Jeremy Smith was sent back down to Providence after joining the team on the trip to New York…Chris Kelly is skating with the team. He has been out of action since November 3 with a broken leg…Entering Thursday night, the Bruins had a nine-game home winning streak against the Panthers.