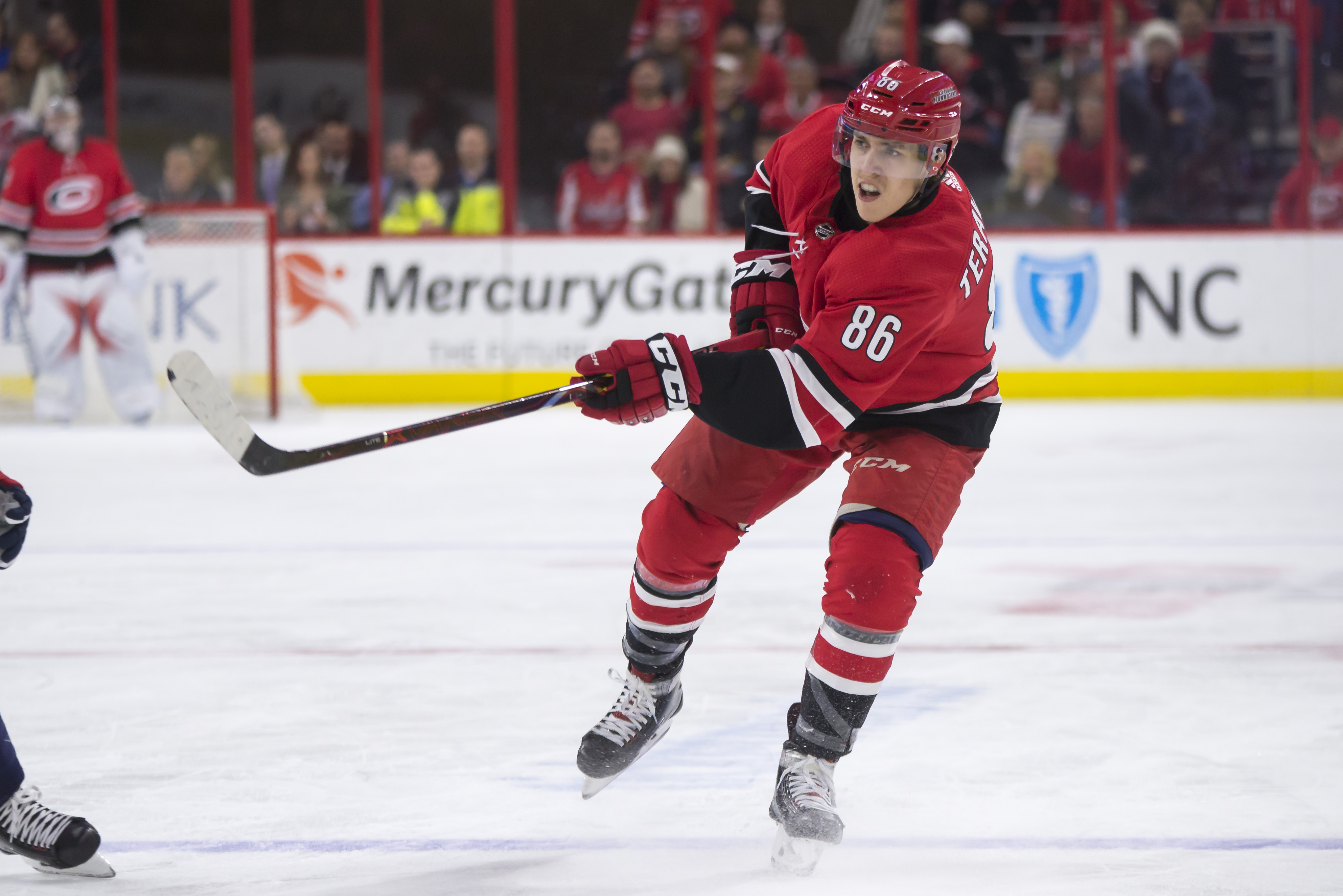 TEUVO TERAVAINEN (86) puts a shot on goal during a game against the Washington Capitals at PNC Arena. The Capitals beat the Hurricanes 5-4 in overtime.

RALEIGH N.C.- The Carolina Hurricanes faced the visiting Winnipeg Jets on Sunday, looking to extend their 2 game winning streak to 3. The Canes have looked strong in their past 2 wins, one away against the Philadelphia Flyers and one in Raleigh against the New Jersey Devils with only two goals scored in both games combined, showing after the Canes 6 game skid going 0-4-2, they were back on track for a wild-card spot in the Eastern Conference playoffs. However, the Jets physical and fast-paced offense would be the leading factor for a 3-2 loss for the Hurricanes but consistency needed from Carolina blossoms throughout.

Sloppy hockey occurred in the first period with many scrummages for the puck and falls occur. However, this would not stop the two offenses scoring on each other with Winnipeg striking first with Patrik Laine scoring on goalie Cam Ward. He would be assisted by Nikolaj Ehlers and Joe Marrow. Carolina would respond with their own score from Teuvo Teravainen with the assist coming from Sebastian Aho and Justin Faulk. Aho’s assist would give him the 100th point of his NHL career and is the 3rd fastest player in Carolina history to acquire 100 points. The period would end 1-1 with the Canes shooting 10 attempts on the net while the Jets shot 9.

The Hurricanes tried to put pressure on the Jets with 17 shot attempts in the second, however, none of those attempts turned into scores for the Canes,  even with 2 power-play opportunities coming from penalties. The Jets, who only had 4 shot attempts in the period, would take advantage of their power-play opportunity off a high sticking call on Sebastian Aho. Patrik Laine would shoot a slap shot on Ward to create the power-play goal, making it his 2nd of the night. He would be assisted by Paul Stastny and Blake Wheeler. The period would end with the Jets up on the Hurricanes 2-1.

The final period would keep up the pace with the first 2 and would see the Canes try to push aggressively for the puck and shoot on Jet’s goalie Connor Hellebuyck repeatedly. Jordan Staal, with 4 minutes remaining, would net the 2nd score of the night for the Canes after many attempts coming up empty-handed. He would be assisted by Jaccob Slavin and Brock McGinn and this would count for Staal’s 15th goal of the season. However, this would not tie the game due to Jet’s center Paul Stastny’s slap shot goal 6 minutes earlier on Ward to make the game 3-1. He would be assisted by Ben Chiarot and Patrik Laine.

The Hurricanes were down 1 score with two minutes left and would take Cam Ward out of the net to add an extra forward, trying to force overtime. The Jet’s defense would not allow that to happen and the game would end 3-2 with Winnipeg pulling out the victory in a strong showing from both teams. Even in a competitive game, the Canes still need to find the spark they desire to push them over the hump into the playoffs. Carolina’s next home game will be on March 13th against the 40-15-8 Boston Bruins at PNC Arena.

Stars of the Game: