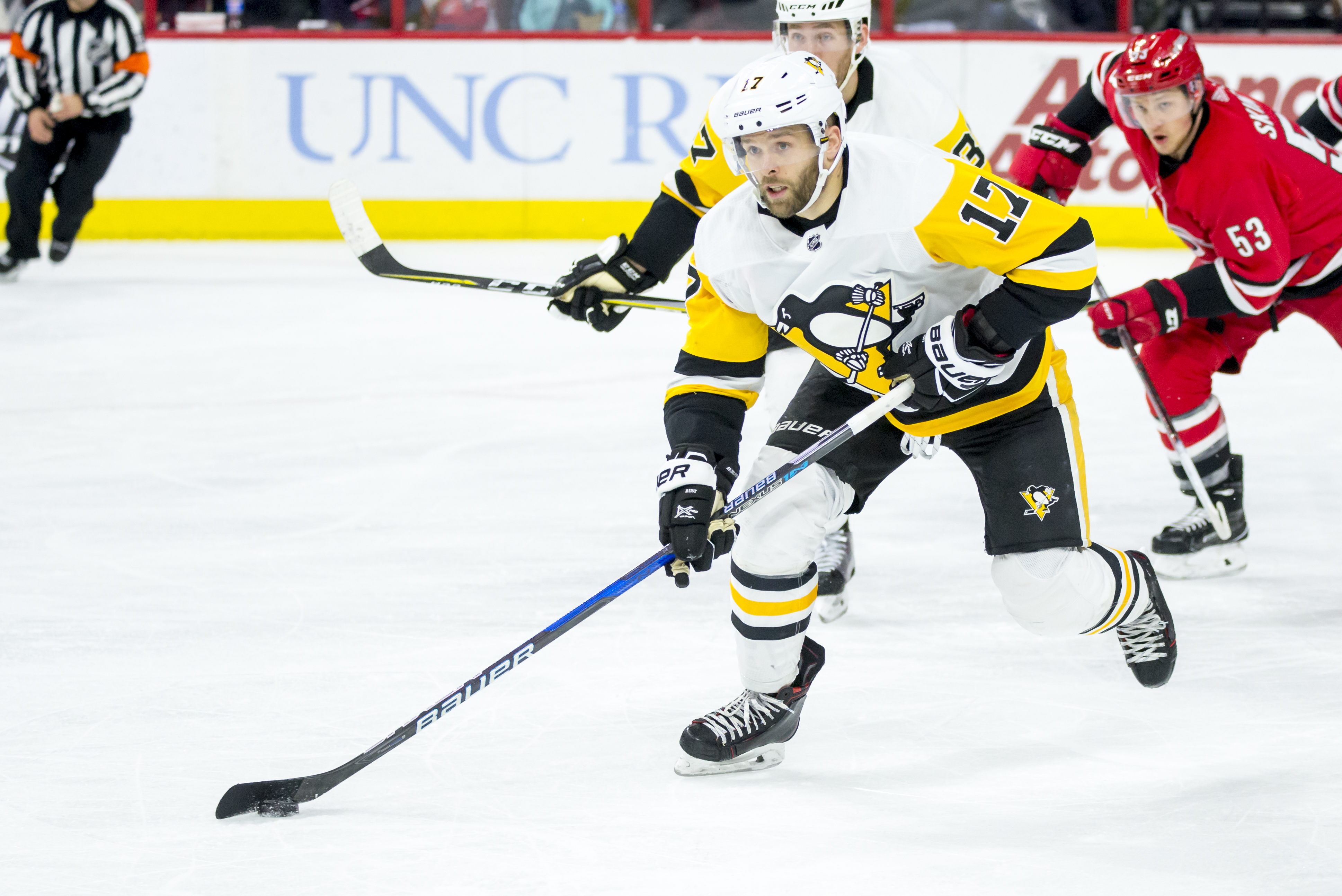 BRYAN RUST skates the puck out of the zone during a game between the Pittsburgh Penguins and the Carolina Hurricanes at PNC Arena (Credit: Spencer Lee).

Comeback Kid Penguins ‘Not Making It Easy On Ourselves’

Last Monday, the Penguins scrapped their way back from a 3-0 deficit in Boston against one of the league’s best, not to mention stingiest, teams. Penguins Dominik Kahun, Nick Bjugstad, Bryan Rust and local product John Marino put four unanswered goals behind Jaroslav Halak in a second period where they outshot the Bruins 21-6 and outpossessed them about 70 to 30%.

Sure, Pittsburgh went on to lose, 6-4, despite a third period they still won by a slightly less dominating margin. But you couldn’t ignore the stick-to-it-iveness, to use a favorite term of head coach Mike Sullivan.

“How we came back in the second period was amazing,” Kahun said. “All of a sudden we played maybe one of our best hockey [periods] of the season. We just said we have to keep going. We felt their D corps was a little bit tired because we kept pushing them back, so we tried to do it even more in the second period, and we had success. We were all over them; just unlucky in the third, but we still had chances. We could have won this game for sure.”

“This was one of the best games we’ve played all year,” Sullivan said. “We’re playing one of the top teams in the league, you knew they were going to push back, but I thought our third period was strong. We had zone time, we had scoring chances, we were making good decisions. I loved our energy; everybody was involved.

“I thought it was a really good game by our team; we just didn’t win. It’s unfortunate, because I thought we deserved better.”

Thursday at Barclays Center, facing the team that swept them out of last year’s playoffs for the first time this season, the Penguins fell into another 3-0 hole. Pittsburgh had the better of the puck possession for all three periods against the New York Islanders but couldn’t find a way to score until the third period, where they led 6-0 in high-danger scoring chances and buried half of those, all courtesy of the makeshift line of Jared McCann, Rust and Evgeni Malkin.

From there it was on to OT, where Rust took a pass from Malkin and won it on a wraparound goal. That snapped a 10-game winning streak for the Islanders – their longest since a 15-game streak in February 1982, which the Penguins also snapped.

“It was hard-fought out there; you had to fight for every inch of ice, and I give our players a lot of credit,” Sullivan said. “Their resilience and their stick-to-it-iveness to keep fighting and keep pushing in that third period I just think is an indication of the character we have in that room.”

Rust described the mood in the room as “very businesslike. We knew we had a big task at hand, and we just tried to go out there and do it. Unfortunately we’ve probably had to [come from behind] a couple more times than we’d like to early on here, but there definitely is that belief.”

“The same [resilience] against Boston, we showed tonight,” said Malkin, though he’d rather they didn’t have to. “Of course it’s not fun when you start a game and you’re [down] 3-0 right away. You need to try and fight back. We need to play right; it’s more fun when you control the whole game. I know we have a good team and we can score four or five goals, but we need to play better in the D zone. The (28th of 31 teams) power play sucks; we can’t play like this. [But] we’re happy we win. We’ll take the two points and go home in a great mood for sure.”

Saturday, the Penguins came home to host the Chicago Blackhawks, but the storyline looked much the same as they fell into a 2-0 hole, got no help from a power play that’s now in an 0-for-26 funk, yet found a way to come from behind and win with goals from Jake Guentzel, Rust again, and McCann with the shootout winner.

Since returning from injury on Oct. 26, Rust hasn’t gone a game without a point. His six-game streak (5G, 2A) is a career high.

“I think he’s played with that [tenacity] since the start of training camp, quite honestly,” Sullivan said. “Rusty’s playing with a hunger that you can see in his game. His speed is so evident, and he’s hard to play against because he can track pucks down, he can strip defensemen from behind, and he has the ability to score. He’s finishing for us, but his second effort is impressive.”

“Just trying to work hard, trying to move my feet, get to open spaces and make plays when they’re there,” Rust said. “I’ve had the good fortune of a lot of good plays from my linemates and, just as a line as a whole, I think we’re all working hard together.”

The Blackhawks had the better of the puck possession through all three periods, though the Penguins carried the play in overtime. Part of the Hawks’ advantage came from Pittsburgh making uncharacteristically poor decisions with the puck, particularly in a second period where Chicago scored both their goals just a minute and a half apart.

“I thought we got away from it a little bit tonight,” Sullivan said. “We gave up more odd-man rushes tonight than we have all season; that’s not how we want to play. I thought they responded really well in the third and we found a way to get the win tonight. I do believe we’ve got a great group; they’re buying in right now and they’re playing hard for one another. I give our leadership a lot of credit, and some of our younger guys are bringing a level of enthusiasm. That’s a fun combination.”

Overall, the 10-6-1 Penguins are pretty happy with the way they’re playing. Getting that power play going would help, though the challenge has been trying to find lineup consistency with players coming in and out of the lineup with injuries. Malkin is back, but Patric Hornqvist is out, joined for to-be-determined lengths of time by defenseman Kris Letang, injured in Boston, and captain Sidney Crosby, who left the game against Chicago.

“We’ve had so many different combinations just out of necessity that it’s been hard to establish any level of consistency,” Sullivan said. “I still believe we have capable guys in there so it’s not an excuse by any stretch, but it’s one challenge we’ve been faced with.

“It’s a combination of things, but I think part of it is guys are pressing a little bit, and sometimes when you’re trying too hard you’re not in an instinctive mindset. We also haven’t had a net presence as consistently in the last handful of games, probably since Patric Hornqvist got hurt. You have to make it tough on the goalie, take sightlines away, limit his mobility by being in and around the crease, and I just don’t think we’ve gotten there enough.”

Their overall tenacity, though? After a week of impressive comebacks, that can’t be denied.

“It shows a lot of character in this room,” Rust said. “But we’re really not making it very easy on ourselves.”