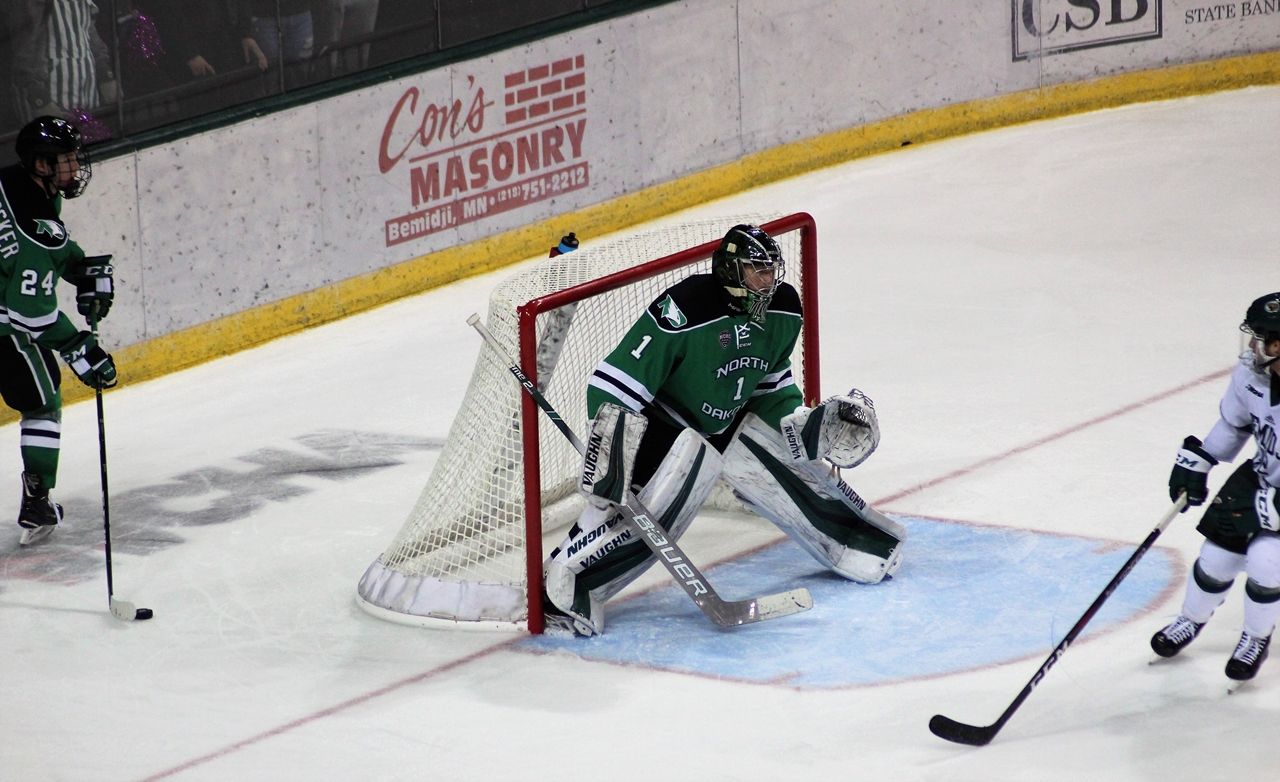 With three games remaining in the regular season, it appears that the University of North Dakota hockey team may be headed to Kalamazoo, Michigan to take on the Broncos in the first round of the National Collegiate Hockey Conference playoffs. First, that isn’t a scenario that favors the Fighting Hawks.

Last night, UND entered their two-game series against Colorado College needing two wins. When the final horn sounded the Fighting Hawks were on the wrong side of a 3-1 loss. When they badly needed a win, they didn’t answer the bell to get the job done.

Through two periods of play, the fans witnessed a goalie duel. Then in the third period, Tigers got three goals from Grant Cruikshank, Bryan Yoon, and Trey Bradley to give the Tigers to a 3-0 lead. In the waning seconds of the game, defenseman Andrew Peski broke the shutout with his second goal of the season.

“It’s frustrating,” UND goalie Peter Thome said. “We didn’t have our best game tonight. At this point of the season that’s not acceptable. Even though it wasn’t our best game we had chances going into the third period. Tie game. Twenty-minute game and we could’ve capitalized but we kind of let that one slip away.”

Play Disciplined Hockey – Stay out of the Penalty Box

Last weekend, I wrote this: You can’t have a parade to penalty box against good teams and expect to win. They’ll bury you. If you take a penalty, you’ve got to kill them. Last Saturday night, against Minnesota Duluth, the Hawks penalty kill gave up two power-play goals in five chances. That was the difference against the Bulldogs. Those two power-play goals resulted in a 3-2 loss.

“I think we took a little bit to get ourselves into it,” Captain Colton Poolman said. “They came out with some jump. I didn’t mind our start, but they came out a bit more grimy than we were. That’s our game. We got to outwork teams at this point of the year and they took it to us between the first and the second (periods). They got those five on threes and we obviously can’t give that up. That’s just so mental and came back to bite us.

“PK was pretty good last (Saturday) night and tonight is it’s pretty tough when you try to kill a five on three the first five minutes and then again (later in the game). So, it’s something we can’t have that and got to roll five guys, four lines, 60 and we didn’t do that. I think some guys got tired and we didn’t get everyone in the game and we couldn’t muster too much at the end there so that’s that was kind of the result.”

Post-game, head coach Brad Berry agreed with his captain, “Two five-on-threes. Two five-on-three goals against. A lost drawn in our end. That’s the difference. They were ready to go and I don’t think we had the start that we had in the last four or five games and again like I said, we can’t take those penalties, and discipline is a big thing. Again, you can’t put a team like that on the power play especially two five-on-threes.”

In the last two games, senior forward Rhett Gardner has taken penalties at key points in big games. Last night against the C.C., Gardner took a penalty for slashing and the Tigers scored on the ensuing power play.

Last Saturday against the Minnesota Duluth Gardner was assessed two minor penalties that led to two five-on-three power plays for the Bulldogs. UMD scored on both power plays that would end up being the difference between winning and losing.

UND can’t expect to kill a penalty if their top penalty killer is sitting in the penalty box. Their other top forward was sitting in the stands with an undisclosed injury.

Again, I know fans are frustrated with the current state of the UND hockey team. Yes, this is a down year. I would bet even money that they will be sitting at home during the Frozen Faceoff and the NCAA tourney.

With that said, if this team plays disciplined hockey they can compete with anyone in college hockey. They need to have everyone pulling the rope at the same time. They can’t afford to have any passengers.

Moreover, if you came here to see me trash the current coaching staff or the players. It’s not going to happen here. Again, I get it. Yes, this has been a painful season to watch. Yes, this team isn’t as good as other teams of the past.

Moving forward, there are some positives to take from this season. If anything the defense goaltending has been pretty good. The top forward line of Mark Senden, Gavin Hain and Cole Smith has been very good. UND needs to finish the season strong and play disciplined hockey.