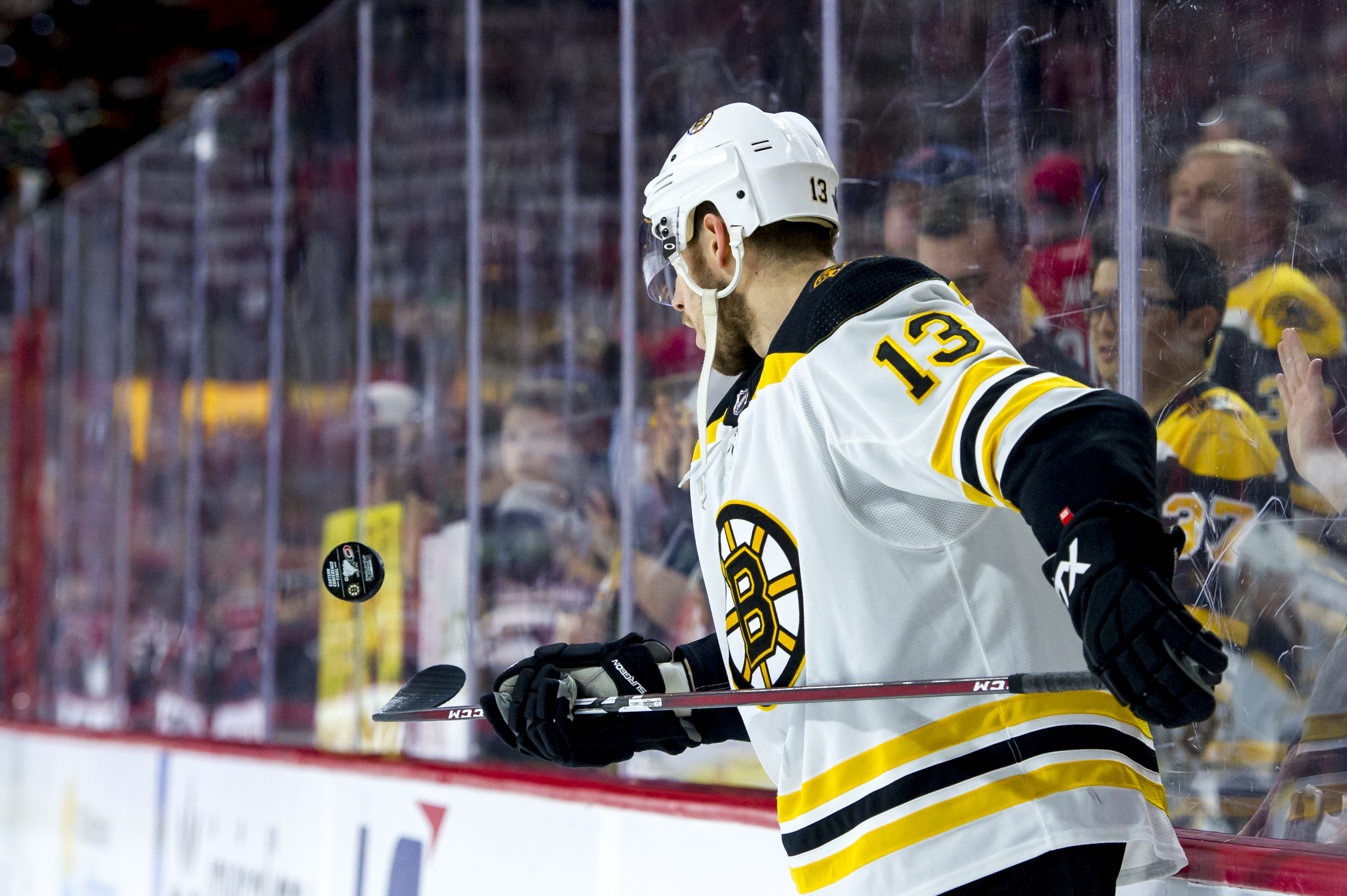 Boston Bruins forward, Charlie Coyle (13), flips a puck on his stick during warmups before Game Four of the Eastern Conference Finals between the Boston Bruins and the Carolina Hurricanes in the 2019 Stanley Cup Playoffs on May 16, 2019.

Watching the Netflix television series Ozark, playing with his golden retriever pup, Bodie, and making “mean” Caesar salads are just a few of the many activities that have become a new norm for Boston Bruins forward Charlie Coyle.

Over a month ago, the National Hockey League paused the 2019-2020 season due to the COVID-19 pandemic outbreak.

It is uncertain when the NHL, or any sporting events in that matter, will resume. But, Coyle said he is optimistic that there will be a team crowned the Stanley Cup Champion for this season. However, how the NHL decides to go about with scheduling may not be fair for every team.

“I’ve heard of a few different scenarios, and things like that,” Coyle said on how the remainder of the season could look like if play was to resume. “I feel like there is so much that goes into all of this [with] planning and scheduling…It’s tough because you have so many teams that were so close, that are on the bubble of being in playoff spots. So how do you decipher that with 10-12 games left? Some of it will be unfair…It’s hard to come up with something that’s fair for everyone and really ideal, because it’s just a crazy situation.”

“I don’t really have a say on what I would like to see them do,” Coyle continued.”I’m still learning and figuring out as I see more scenarios, but I don’t have a perfect one in my head that I would like to see. I’m just going with the flow right now and seeing whats out there and what we are able to do and the best way possible to make it as fair as possible, but it’s just so crazy to see what will go into planning and scheduling.”

One of the possibilities that has been talked about not just in the NHL but around other professional sporting leagues is the idea of resuming play without fans in attendance. That could mean playing the Stanley Cup playoffs with no one there.

It may just be an idea, but it is an idea that Coyle does not want to happen as fans are a huge part of the game as well.

“It’s very bizarre to think about,” said Coyle. “Playing a meaningful game with no fans in there, it’s almost like a practice atmosphere. I don’t know what it would be like. [I’ve] never played an NHL game where no one was there, so it would be a new experience. If that’s what it has to come down to then, yeah, that’s what we got to do. But the perfect scenario would be to have our fans in there and cheering us on because we love playing in front of these guys…they bring so much to our game and our team.”

With only essential businesses open, that means players are unable to keep up with their skating conditioning. While they may not be as effective as on-ice skating, Coyle has found alternatives in roller-blading, weight-lifting, a new-found love of the Peloton bike.

“I’ve been trying to treat it as my summer training schedule,” Coyle said. “I’m working out 4-5 times a week, doing a lot of body -weight stuff, been able to get my hands on some weights and other equipment. I bought a Peloton Bike. I needed some sort of conditioning, and I bought that. So, I’ve been doing that and keeping the conditioning up…just stick-handling in the living room, and trying to keep up the skills that you can with what you got. I’m just trying to stay in shape the best I can without being on the ice.”

Coyle says he also been in frequent touch with his teammates, but especially his family members has one of his grandmothers passed away last month.

Gail Coyle, 81, passed away on March 24, 2020 surrounded by her loved ones, according to her obituary on Legacy.com.

“She lived a great life,” Coyle said.  “We had a lot of great memories with her. Obviously sad to see her go.”