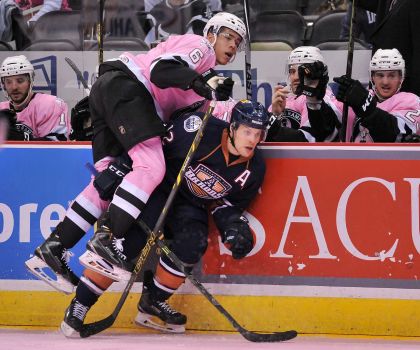 In their second and final game sporting pink jerseys for the Pink in the Rink campaign, the San Antonio Rampage took on the Oklahoma City Barons in what was arguably their most exciting game of the season. The win—which best exemplifies the pinnacle of Rampage, offense, defense, physicality, and intensity—visibly charged fans and players alike.

The first period, however, was inconsistent with the rest of the game. Despite a packed house at the AT&T Center, the Rampage opened up the game with uninspiring and disorganized play. While statistically speaking the Rampage and the Barons appeared evenly matched after the first period, the Barons noticeably had the upper hand, as they consistently kept pressure on starting goalie, Dan Ellis and the rest of the Rampage team. The Rampage were nearly unable to respond to such pressure, as the Barons halted any whiff of offensive momentum, leaving the Rampage to aimlessly flutter pucks in the chest of Oklahoma City’s Richard Bachman.

With less than a minute left in the period, the Barons deservedly took the lead, as Bogdan Yakimov batted a puck out of midair to the waiting stick of Brad Hunt who tucked it home.

The start of the second period looked hopeful for the Rampage as they intensified their play until eventually drawing a tripping penalty from Barons’ Travis Ewanyk. The Rampage looked to capitalize on their one-man advantage, but their insipid play proved insufficient. After a key face-off win for the Barons left-winger, Curtis Hamilton caught the puck at the top of the circle and wristed it to the back of the net for a shorthanded goal.

Threatened by a two-goal deficit, the Rampage increased their physicality which resulted in referee intervention after nearly ever whistle. Their physicality climaxed when Jonathon Racine was tacked with a tripping penalty that resulted in flaring tempers from both sides. Amid the several scruffs taking place, the most prominent was between Racine and Ewanyk, who proceeded to drop the gloves and duke it out. Although a short-lived battle, Racine landed a series of three right hooks that left Ewanyk on the ice. If that wasn’t enough to rowdy the crowd, Racine passionately acknowledged the fans by raising his arms and yelling “Lets go!”

Although the Rampage found themselves at a one-man disadvantage due to Racine’s tripping penalty that prefaced the fight, the team appeared to instantaneously be refurbished, defined by a shorthanded goal less than a minute and a half later by Vincent Trochek.

But the momentum from the fight didn’t stop there. After regaining full strength, the Rampage struck again—this time by center Brad Olson—successfully tying the game at 2-2.

After depleting the two-goal deficit, the Rampage momentum came to a halt, as Ryan Hamilton sniped a wrister past Dan Ellis to put the Barons on top with two minutes left in the second period, softening the intensity in the arena.

The third period started with a healthy dose of vehemence as the Rampage looked to fight back after a one goal deficit. However, their source of fervor didn’t come from a fight, a goal or even a pep talk from coach Tom Rowe. Rather from Terry Tejeda, a breast cancer survivor and Rampage season ticket holder, who was interviewed during a time-out. She yelled at the Rampage, “If I can beat cancer, then you can beat Oklahoma!”

It seemed to hit home. Less than four minutes later, John McFarland scored. Minutes later, defenseman Shane O’Brien scooped up a drop pass and hammered it home. Two minutes following the goal, Bobby Butler continued the charge and tucked in a garbage goal off a huge rebound—his 20th of the season, and 100th career goal. In sum, the Rampage were able to add three goals in just ten minutes, which transformed their deficit to a three goal win in front of a desirous crowd.