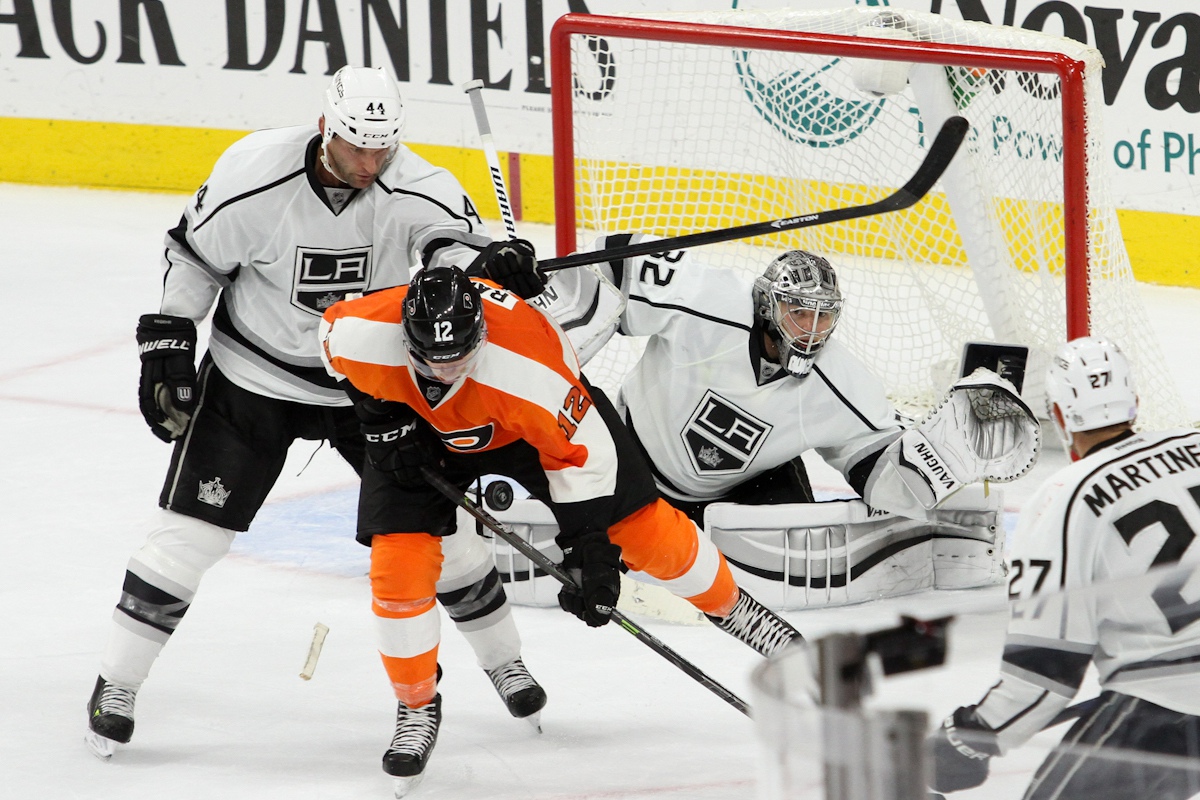 Catching Up with the Kings’ Depth Squad

Perhaps it’s just that we’re partway into the year and all the main stories have been told, but the media surrounding the LA Kings this week has focused on players other than the stars. Here are some updates related to the depth of the roster.

Mike Richards is being talked about because with Philly in town to play Saturday, the memories of his time there are surfacing, at least for the people paid to ask him questions. He was drafted by the team in 2003 and played there for five years before coming to LA in 2011. As you likely know, there was much debate about whether the Kings would keep him, and Lombardi did, extending his contract last summer. People who don’t know hockey—ie., anyone who thinks managers act on feelings—said it was to honor him for his play in the two Stanley Cup years where he’s had a key part in the LA team winning the Cup.

Nothing doing. He’s in LA because a decent utility center is a rare commodity to unearth, and he’s that guy. But he’s not just a fourth-line guy, though he has spent time there. He’s now nominally on the third unit, playing alongside of Dwight King and Tyler Toffoli. That’s speed, size, and grit all on one line.

His production in the stats department shows him with ten points going into Saturday, when he and the Kings played a 1pm game against Steve Mason and the Flyers. Interestingly, Richards leads the team in penalty minutes, with 35, due to some fighting and a misconduct along the way for instigating. He has been the model of consistency, one of eight forwards thus far in the year to play in all Kings games.

Richards is down to about 13 minutes over the past ten games, but he started out the year getting 15 and 18, with 15 being about the norm through the first 15 games of the year. He has one game-winning goal, against Minnesota late in November.

Near the end of the team’s Saturday contest, he was for a crucial shift in which he got a puck at the side of the net, on the right, and fired it back into the slot for a turnover. But then on the next rush, he was in the left slot when the puck came his way. He missed it, but drew a penalty on the man covering him, former King Wayne Simmonds. The Kings did not capitalize on the chance, but it put the game in question right to the end, with Philly up by a goal. This was magnified all the more when the Flyers launched one over the glass with 3:03 to play and 13 seconds left on Simmonds’ penalty. Richards was out on the point during the power play, by the way. The puck over the glass led to a brief five on three, then a one-man advantage, but before it was over, the Kings took a penalty of their own.

Andy Andreoff has been lent (loan is a noun, eh?) to the club’s AHL Manchester affiliate on a conditioning assignment. The league’s rules, which the Kings have been known to flirt along the edges of (see my story on the Dunce Caps from earlier this week), allows this in certain circumstances. Those are, namely, that the loan not extend past 14 days and that it not be used to circumvent the waiver rules. Oh, and the player himself has to agree. One more thing—he continues to be paid his NHL salary.

Andreoff had not seen the ice in a game since Halloween, and his time on ice when he was playing (eight games) was as low as in the four-minute bracket (once), and five-minute stints happened twice for him. He was a 2011 Kings draftee, and he’s thus far played two years in Manchester and just the handful of games this year with the NHL club. He has no scoring stats to report and 12 PIMs. In fact, he has launched just three shots on net since his NHL tenure began. But in Manchester, he has played 145 games and notched 244 PIMs alongside 24 goals. Is there a place on the NHL club for this guy? My Magic 8-Ball says . . . No. At least, not with Kyle Clifford, not to say Richards, on the team.

If there’s any redeeming side to his game, it’s that he’s become a bit of a playmaker, with 24 assists in 76 games last year in Manchester.

However, to editorialize a bit here, this guy’s Junior hockey numbers seem to tell a tale. He was with the Oshawa Generals for four-plus seasons, and his PIM numbers over the four full years went like this: 37, 70, 109, 88 (this last in ten fewer games than prior years). What does that say? Marginal player realizes he has to fight to play. That’s just absurd, and it takes a toll on these guys, both physically and emotionally. My advice: save your salary, kid. You’re not going to survive in today’s NHL for very long. Media speculation says that he will rejoin the team, however. This ought to happen next week, when the Kings are playing an East-Coast swing. They go to Buffalo, then head to Ottawa, Montreal, and Toronto before finishing up in St. Louis, MO over the five games in eight days trip that begins on Tuesday.

Kyle Clifford is playing a more complete game, actually looking much more like a hockey player than a professional fighter on the ice. He still takes up the muscle portion of the lineup, but his (fourth) line has some skills. The line consists of Jordan Nolan and Trevor Lewis alongside Clifford. The Nolan spot has been rotated a bit between a couple of players, with Nolan thus far having seen action in 18 of LA’s 27 games. He began the year playing ten straight, sat a two-game suspension, played a couple DND a couple, played one, DND five, and is now back for his sixth in a row.

Clifford was the last player off the ice after the Kings’ warm-up period before the Philly game. His line then came out and did some good things, including Trevor Lewis going into the corner to retrieve a loose puck and feeding it to the center, but with these players, it’s a bit of a hit-and-miss proposition as to whether they’re going to capitalize on such a chance. It’s not as bad as when hamfisted guys like Parros (18 goals in 474 games) or Westgarth (7 in 169) played for the Kings, but Clifford’s 23 in 303, Nolan’s 11 in 151, and Lewis’s 21 in 293 are not exactly marks of offensive prowess.

But here’s an irony. With the Kings down 2-1 and about six minutes left versus the Flyers, Clifford found himself on the first line, in the Philly end. Was this an odd change? Apparently not, as he stayed out there with Carter and Kopitar for a shift. Guess why? Pearson hadn’t been getting it done, in Sutter’s point of view.

And about the team in a larger perspective, here you go: the Kings, a perennial 2-1- or 3-2-game team, is actually in the top half of the league in scoring. Their numbers show them in the top half of the league, and they actually tie with the Predators in the West for the second spot in goal differential with a plus-18. They didn’t help themselves in this area Saturday, however, as they scored just once in a 2-1 loss.

The team won two games in a row this week, both by shutout, and won three of four while denying the other team a goal. Credited with the shutouts were Jones with two and Quick with one. Surprised? Coach Sutter wasn’t, but neither was he very complimentary of his goaltending in press interviews. His comments might be summarized to say that goalies aren’t the big deal people make them out to be, nor are shutouts. Fun times in net for the LA duo.

Against the Flyers, the Kings were flat as badly made pancakes early on, but about midway, after going down 2-0, they came alive. The shots were about even with ten apiece, but LA, by midway in the third, was up 33-16. They had also scored a goal, and likely would have had more but for the play of lefthanded goalie Steve Mason. The LA team crashed and collapsed in on him, firing shots and getting rebounds. The chances came to the LA team as they pressed. They notched it up to 35 shots to 16 by five minutes to go, and the Kings were on the power play, as noted earlier.

They didn’t get it done, and they took a penalty of their own with about a minute and a half to go to put the game out of their reach. Quick left with about 1:10 to go, evening up the skaters on each side, but nothing happened in the LA team’s favor. They saw the Flyers hit the post with the net empty, which was about as exciting as things got in the waning time.

Gretzky a player you like? You’ll enjoy Facing Wayne Gretzky, and not just because I wrote it. New!