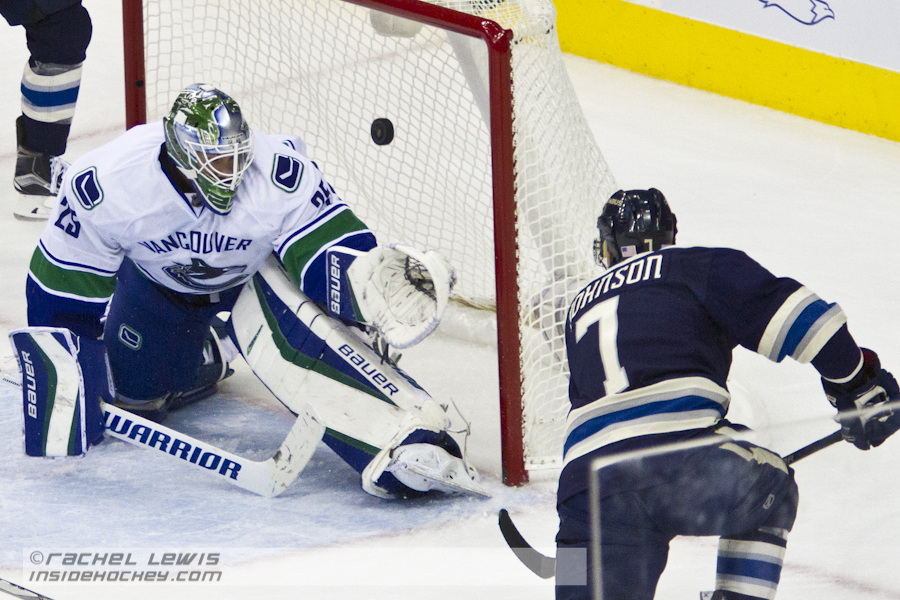 Henrik Sedin said it best at the Canucks’ end-of-season press conference: “It’s dangerous to just keep going year after year and thinking about getting a high draft pick. We’ve seen other teams not being successful doing that [à la Edmonton?]. We have pieces, but now we have to surround them with good players.”

With a 28th place finish in the NHL this season, the Canucks are focusing on looking forward to next season. Management however, has been fairly quiet about what the plan is for certain players. The Canucks will be getting a high pick in the 2016 NHL Draft, but as Henrik stated, they need to surround their young players with already successful and experienced ones if the Canucks hope to properly develop their prospects and build a team that can make a run for the playoffs.

One of the bright spots in the Canucks’ mainly dismal season was their young players, and their plethora of young players has increased with the team’s interest in several NCAA players. The Canucks signed defender Troy Stecher, who recently won the NCAA championship with the University of North Dakota, on April 14th. They also signed goaltender Thatcher Demko, the 2016 winner of the Mike Richter Award from Boston College, on April 20th. The Canucks have also been keeping a close eye on 2015 first-round pick Brock Boeser, a winger who was also on the championship North Dakota team.

So, with the push towards a younger team, who on the Canucks will be shown the door? Speculation has been abundant. There was, for example, discussion during and after the Canucks’ final regular season game about the possibility of them buying out Alex Burrows’ contract. We still do not know what the future holds for many of the Canucks, but here are five Vancouver players who could likely be moved (or not resigned) by the Canucks this off-season:

After playing in Nashville for six seasons, Hamhuis returned to his home province of B.C. to play for the Canucks in 2010. He has played a pivotal role as a member of the team’s defensive core, but the 33-year old is a UFA this summer, and as the Canucks continue to try to go younger, questions remain about whether or not they will resign Hamhuis. It was thought that it would have been in the best interest of the Canucks for them to have traded him by the trade deadline, but any efforts to do so failed. Hamhuis missed a significant number of games this season after taking a puck to the face, but played well upon his return.

Higgins was acquired by the Canucks in 2011, prior to their run to the Stanley Cup Finals. He scored four goals for the Canucks in those playoffs, three of which were game-winners. But in January, the Canucks announced that they were trying to trade the 32-year old winger, and he was sent down to the AHL. Higgins was eventually recalled by the Canucks in mid-March despite the initial news that his time with the Canucks was over. While playing with an energetic style that the team and fans have loved, Higgins was disappointing this season, with three goals and one assist through 33 games. He has one year remaining on his contract.

Vrbata was a huge contributor to the scoreboard last season, notching 31 goals and 32 assists and having significant success with the Sedins and Nick Bonino. But with a change in linemates this season, Vrbata struggled to find chemistry with anyone, scoring only 13 goals and 14 assists, and finishing with a plus/minus of -30. 34-year old Vrbata is a UFA, and his drastic drop in productivity and effectiveness this season could be enough for the winger not to be resigned.

27-year old defender Weber is also a UFA. He played 45 games this season, the lowest number of NHL games he’s played since 2010-11. Weber was sent to the AHL after clearing waivers in February, but was recalled to the Canucks before playing a game with the Utica Comets. Last season was likely Weber’s best season in the NHL so far, but he was a healthy scratch early on this season and was not the high-scoring defender he was in 2014-15, often getting outplayed by others (i.e. Ben Hutton). At the end-of-season press conference, Weber said, “On the first day of camp, when they say you’re No. 7 (on the depth chart), it’s kind of frustrating. You go from being a top four to being the seventh defenceman over the summer without anything happening. It was a bit of a struggle from the start and not what I expected.”

By no means was Miller bad this season – he often played very well, especially considering how the skaters in front of him did not always do their part to help him out. The 35-year old has one season and $6 million left on his contract with the Canucks, but with NCAA star goalie Demko on his way (and still no Stanley Cup for Miller), the Canucks could choose to move him, especially if they believe that they no longer have room for a $6 million goaltender.

Of course, as the Canucks remove players from their roster, they also need to add new ones, and as Henrik stated above, the Canucks need successful and experienced players to support the young ones. Here are five UFAs the Canucks might want to take a look at:

Lucic has settled in to life in California with the L.A. Kings and it has been reported that he is close to finalizing a contract extension with them, but (even though Lucic caused the Canucks some trouble as a member of the Bruins in 2011) his combined grit and goal-scoring ability could be of great use to the Canucks. The 27-year old who grew up in Vancouver had 20 goals and 35 assists in 81 games this season with the L.A. Kings.

The Canucks really need help on the blueline, and 29-year old defender Yandle could be the key. Currently with the New York Rangers, Yandle has spent most of his nine year NHL career with the Arizona Coyotes. A relatively high-scoring defenceman, Yandle has finished with 30 to 59 points in each of the past seven years (which is more than any of the Canucks’ defenders and most of their forwards had this season).

Sure, the Canucks are overloaded with centres, but long-time St. Louis Blue Backes provides offence and leadership. He has scored at least 20 goals a season since 2010 (minus the lockout year), is capable of playing in multiple situations, and upholds the defensive responsibilities of a centre well. However, signing Backes will likely require a lot of money – do not expect his contract to be cheap.

Maybe it’s time for Ladd to come home to B.C.. Born in Maple Ridge, the 30-year old winger has two Stanley Cups and brings with him leadership, experience, and scoring prowess. Now back with the Chicago Blackhawks after playing in Winnipeg for a few seasons, Ladd is, like Backes, another experienced forward who can be strong both defensively and offensively.

Brouwer also grew up in B.C., and won the Stanley Cup with the Blackhawks in 2010. Currently with the St. Louis Blues, Brouwer is a physical player who is driven to win and who leads by example. Teammate Steve Ott told the Belleville News-Democrat, “All those passionate things that he does, it feeds the next guy down. It makes your young guys accountable … and you don’t want to let a guy like that down because you know how hard he’s playing.” This sounds like the kind of player who could push the Canucks’ young players to the next level.