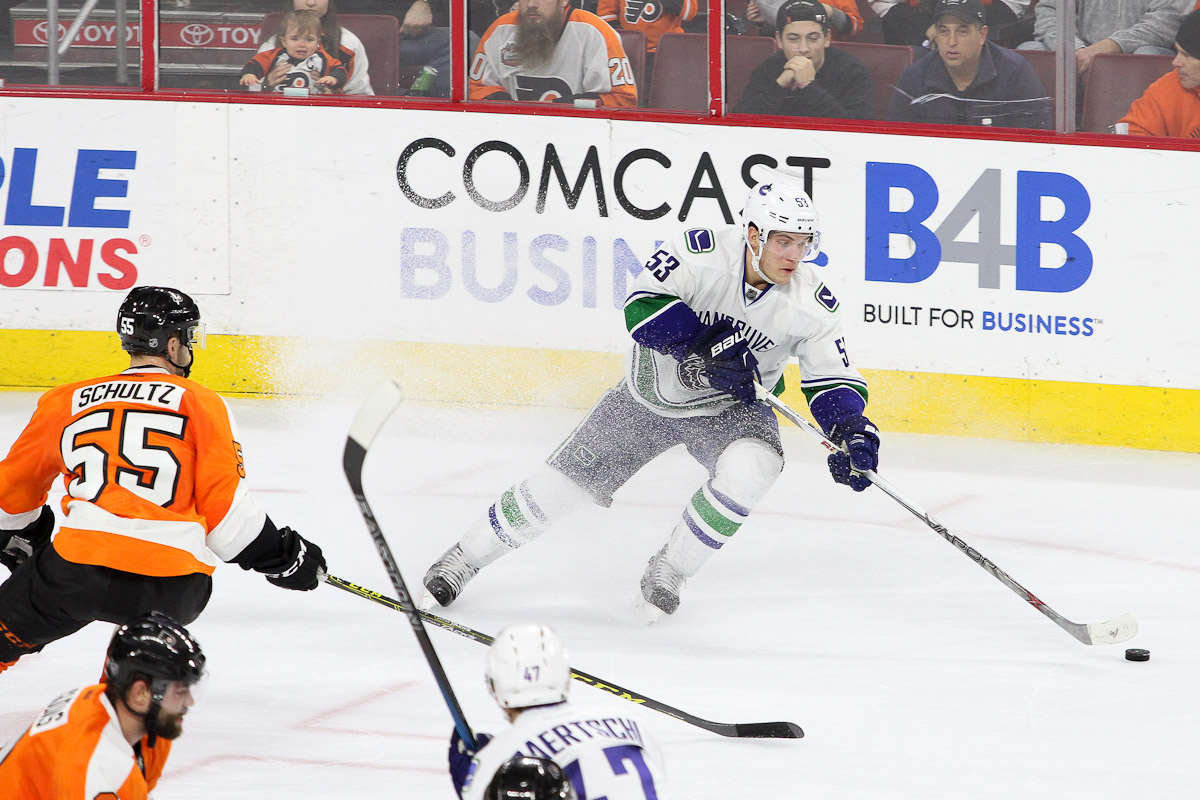 Canucks: Horvat the Face of the Future

With the Vancouver Canucks getting set to play the New Jersey Devils and former Canuck Cory Schneider today, there is no better time to talk about Bo Horvat. 21 year old Horvat, who was infamously acquired by the Canucks in the trade at the 2013 NHL Draft that sent Schneider to New Jersey, has come quite a long way since his NHL debut in 2014, and is proving to be a worthwhile long-term investment.

Drafted ninth overall, Horvat did not have an explosive or immediate impact on the team (say, à la Connor McDavid or Auston Matthews). But now, in his third NHL season, Horvat leads the Canucks in goals and is demonstrating how he will lead what The Globe and Mail has called “life after the Sedins.”

After 25 games this season, Horvat leads the Canucks in goals with eight (two of which are shorthanded) and is tied for first on the team in points with Henrik Sedin with 16. He is on his way to surpassing his previous numbers of goals and points; last season through 82 games he had 16 goals and 24 assists.

The Canucks’ game on Saturday against the Toronto Maple Leafs was a prime example of how Horvat has been making his mark on the team. While he did not score in regular time, he had a strong game in the faceoff circle, created scoring opportunities, and scored in the shootout to help his team win 3-2.

With his continued improvement, not only is Horvat projected to be a top line player in the future, but he himself aims to be one as well.

“I see myself as a top-line player,” Horvat told The Globe and Mail. “I’m trying to work my way up to that.”

Besides his increasing number of points, Canucks head coach Willie Desjardins has also noticed an impressive improvement in Horvat’s speed, a component which has typically been one of Horvat’s weaknesses.

“The (speed) difference between (the first time I saw him) in Penticton and now is unbelievable. I wouldn’t believe that was possible”, Desjardins told The Vancouver Sun. “I’ve talked to other players, who are good players, but maybe not quick, and said, ‘You should talk to Horvat and see what he did.’”

Perhaps the secret to Horvat’s rapid improvement is his drive and determination which, along with his mature outlook on the game and seriousness with which he takes his role on the team, is impressing his teammates and coaches.

“His will to win, his will to get better, is really there,” said Canucks forward Alex Burrows to The Globe and Mail. “You can’t really teach that. He’s just got it in him.”

Horvat and Burrows have been playing together a lot, which has been beneficial for both. Horvat has assisted on all four of Burrows’ goals, and three of Burrows’ six assists have been on goals scored by Horvat. Burrows, a veteran leader on the team, likely also serves as a mentor for Horvat, who could take on more of a leadership role in the future.

One of the main struggles for Horvat over his first seasons in the NHL has been balancing his offensive and defensive responsibilities. He can be strong in both senses, but he perhaps tried to do too much in his first two seasons. At times his focus on his offensive play took away from his defensive play, and vice versa. But there is no reason why Horvat cannot be a great first-line, two-way centre.

“To me, Bo should be able to play against the other team’s top centre. He’s big and strong and he’s good on draws, but to do that, he’s got to be a little better defensively,” Desjardins told The Province. “That’s a role I see him playing. And a lot of times, the other team’s top lines aren’t great defensively and that’s where he can score, too. I see him able to do both.”