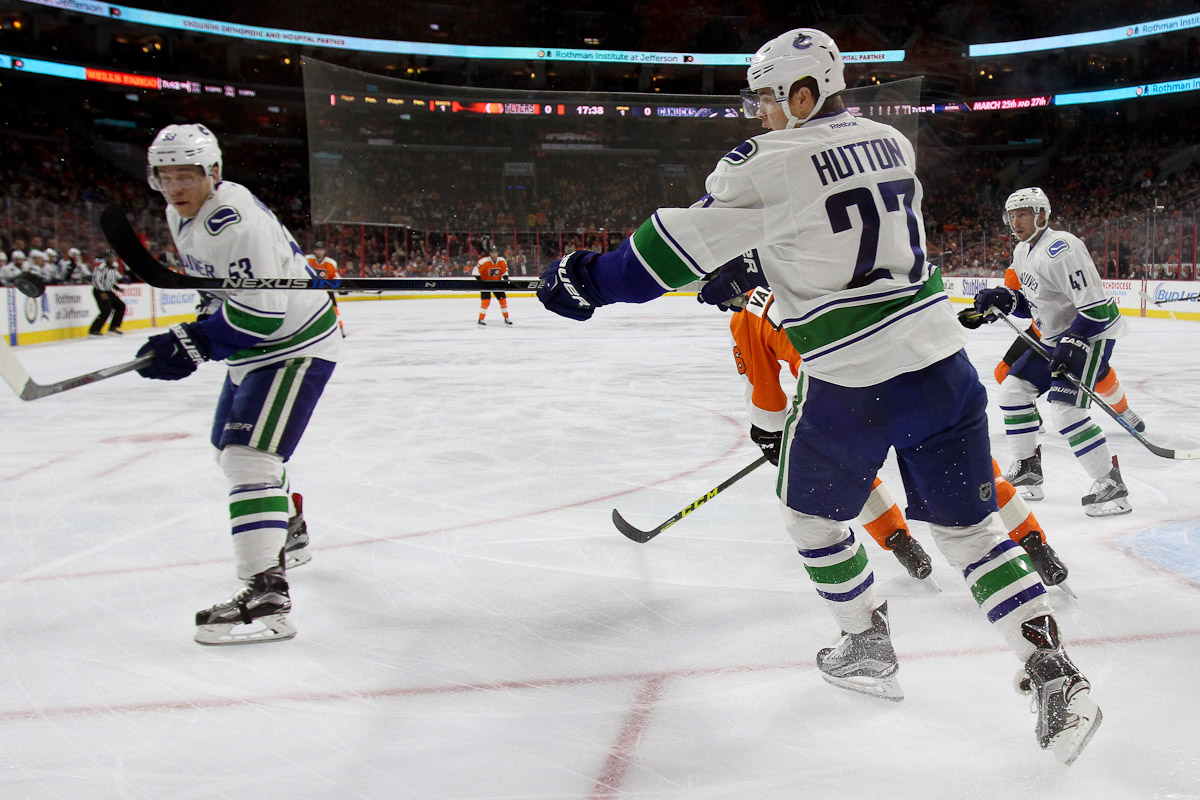 Canucks: All About the Youth

Silence – that’s pretty much all there was from the Vancouver Canucks on trade deadline day. Besides the rumours of where Dan Hamhuis could potentially be traded (which never happened) and the news that Adam Cracknell had been claimed off waivers by the Oilers, the Canucks’ Trade Deadline Live Blog (bit.ly/21KtjsT) had to fill its space with information about what the media were eating and photos of Dan Murphy checking his phone – not exactly what people were hoping to see.

The Canucks were a lot less active on the day of the trade deadline than expected, especially with the current state of the team. So what’s next then? The Canucks are 23rd in the league and have made essentially no roster changes in time for the final push for a playoff spot. But maybe the playoffs aren’t the focus right now. One thing is clear – right now, the Canucks are all about the youth.

Although players like Hamhuis and Radim Vrbata weren’t moved by the trade deadline, the time of these older players (along with others, like Alex Burrows) seems to be up, at least with the Canucks. Besides the Sedins, the players who are now running the show are the multitude of players on the roster who are under the age of 25.

“I think if you look at all the young guys we have in our lineup, they have developed a lot this year,” Canucks coach Willie Desjardins told The Vancouver Sun. “You look at Baertschi, how far he has come, you look at Virtanen, you look at Markstrom, you look at Hutton, we have a lot of guys who have come a long ways. So I think we’ll keep trying to develop guys.”

The new line of 23-year old Sven Baertschi, 22-year old Markus Granlund, and 19-year Jake Virtanen is easily one of the most exciting lines to watch right now. Granlund was acquired by the Canucks in a trade that sent prospect Hunter Shinkaruk to Calgary in late February. Through 31 games with the Flames this season Granlund had only four goals and three assists, but him and his new line mates are generating many exciting scoring chances. On Thursday against the San Jose Sharks this line was arguably the Canucks’ best, with Baertschi and Virtanen scoring the Canucks two lone goals in a 3-2 loss.

The Canucks are also entrusting many young players with the role of centre. Besides Granlund, 20-year old Bo Horvat and 19-year old Jared McCann are two of the Canucks’ four centres. Other young forwards include 23-year old Emerson Etem, who has been getting playing time on the top line with the Sedins, and 24-year old Linden Vey, who has three points in the last four games.

“Now, it’s about the young guys,” Daniel Sedin told The Province. “It’s about them maturing and getting better every night and learning every day. That’s why it’s so important for us to keep playing the right way, and practising hard. It’s going to pay off next year. Big time.”

On the blue line, 22-year old Ben Hutton is getting a considerable amount of playing time. For the first few months of the season he was playing around 17 minutes a night, and in the last 10 games he has played at least 20 minutes a night. On Thursday against the Sharks, Hutton played a season-high 26 minutes. He leads the Canucks’ defenders in assists with 18.

As well, 21-year old Brendan Gaunce was called up and played his third game of the season with the Canucks on Thursday night. He played two games for the Canucks in late October, scoring one goal, and has had significant success with the AHL’s Utica Comets this season, scoring 15 goals and 18 assists in 43 games.

“The younger players have to have opportunities, for sure,” Desjardins told The Vancouver Sun. “We have to see where they are at and what they can do. I still think you have to earn things, you don’t just have things given to you, but I think they have to have an opportunity to earn it. So I would see them in a little bit more of a prominent role.”

Currently the Canucks are also trying to sign 21-year old Nikita Tryamkin, a big defender who just finished his season with the KHL’s Yekaterinburg Avtomobilist. The Canucks drafted Tryamkin 66th overall in 2014, and are trying to work through salary cap issues to sign him. One of the areas the Canucks have struggled in has been defence, and Tryamkin has a promising future as a defender.

“He’s coordinated and he’s a very good skater,” Canucks GM Jim Benning told Vancouver Metro. “Because at (six-foot-eight-inches), you have that long reach, he can defend. He’s got a big wing span to defend and when he gets the puck, he can make a good first pass and get it going the other way.”

In case you haven’t figured it out yet, the Canucks are in a rebuilding stage, and the development of their young players is arguably more important than a trip to the playoffs this year. And of course, if the Canucks finish near the bottom, there’s also the opportunity for them to get a high draft pick – another chance to add more youth and continue to rebuild this team into a Stanley Cup contender.