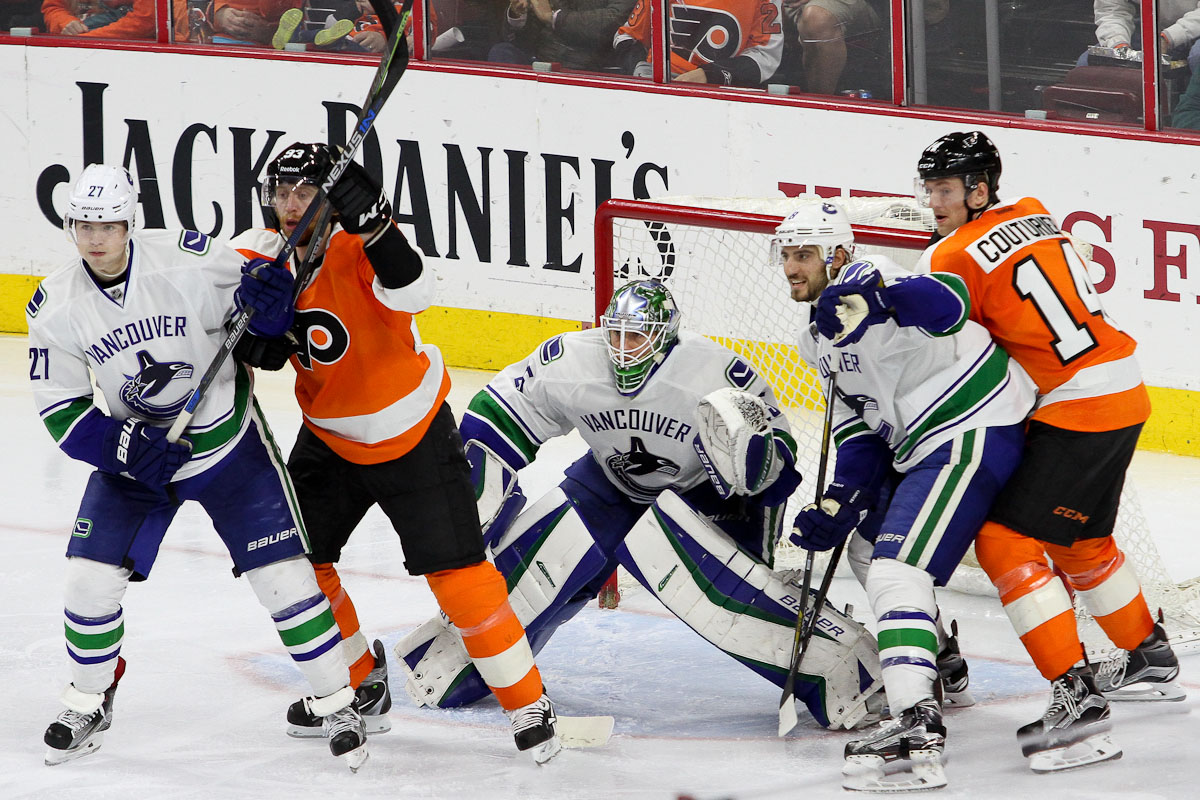 With some new signings and some departures, the Canucks’ 2016-17 defensive core is definitely going to look different from last season.

Over the past few months the Canucks have signed defenders Philip Larsen and Erik Gudbranson and seen the departure of Dan Hamhuis (and Yannick Weber). It is anticipated that Alex Edler and Chris Tanev will make up the first defence pairing and Ben Hutton and Gudbranson the second defence pairing. The third defence pairing will likely be Larsen with someone like Alex Biega, Nikita Tryamkin or Luca Sbisa – and from the sounds of it, Larsen could be expected to take on a significant role with the Canucks, in particular on the power play.

“He’s a right-shot guy who can run a power play … He’s a good skater and can transition the puck up ice,” Canucks GM Jim Benning told The Vancouver Sun. “We’re going to sign him this summer and give him a chance to play on our team next season.”

Drafted in the fifth round by Dallas in 2008, Larsen split his time between the NHL and the AHL from the 2009-10 season to the 2013-14 season. In 125 games with the Edmonton Oilers and the Dallas Stars, Larsen had eight goals and 23 assists. He didn’t have the best showing in the NHL, but in the last two seasons, which he spent in the KHL, he flourished. He has also suited up for his home country, representing Denmark in one World Junior Championship and five World Championships.

“To be honest, I don’t know if I was ready for that role,” Larsen told The Province of his experience in the NHL with Edmonton. “I never really got comfortable in Edmonton. I had to move somewhere to get my career back on track.”

Besides signing Larsen, there is also hope that the Canucks will gain some offense through their acquisition of defender Erik Gudbranson – but without Gudbranson having to actually score any goals. The 6’5″ 24-year old acquired from Florida in the Jared McCann trade is not known for his goal-scoring, but instead for his size, physicality, and shutdown defender style of play.

It is anticipated that Gudbranson will play alongside Hutton, who led Canucks defenders in points last season with one goal and 24 assists. Hutton and Gudbranson could pair quite well together, with Gudbranson using his size and physicality to make the room that Hutton needs to skate the puck and contribute offensively.

“I played at the worlds with Gudbranson and he’s a massive kid,” Canucks forward Alex Burrows told The Province. “He’s got a little bit of Jovo (Ed Jovanovski) in him, too. The younger Jovo who wasn’t scared of anybody and just wanted to hurt guys and be a leader. It will be an adjustment coming into a hockey crazy market, but as a Canadian kid, he’ll thrive under that pressure.”

But do the Canucks have a defensive group that is too inexperienced? The group is definitely young, and has (pardon the cliché) potential. However, potential does not always equal results, and the Canucks will likely miss having veteran Dan Hamhuis. This defensive squad may not be the one that helps a team win a Stanley Cup, but will hopefully, at the very least, pave the way for up-and-coming defenders like Olli Juolevi and Troy Stecher.