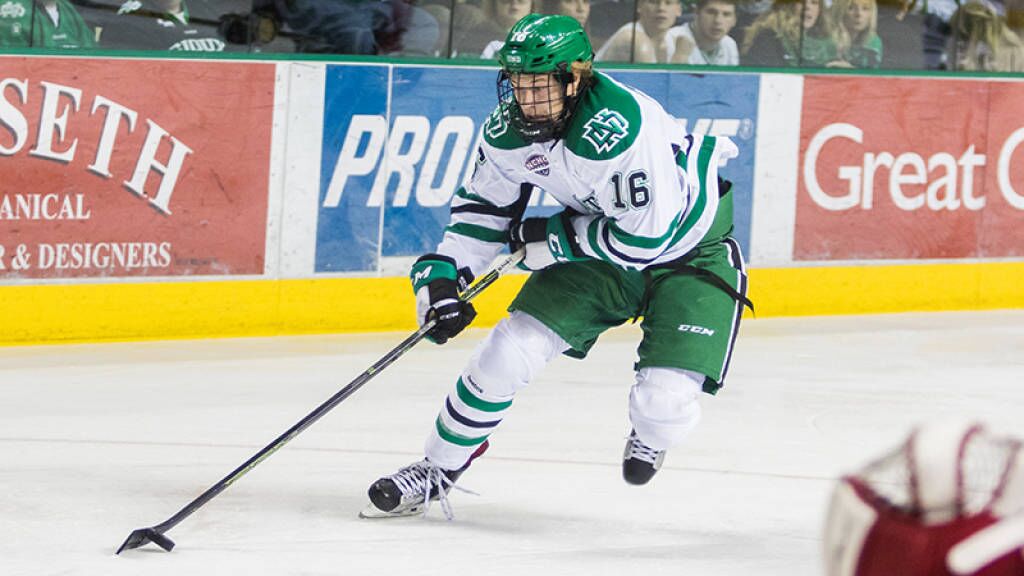 Last night the University of North Dakota Hockey team took on the Canisius College Golden Griffins in a non-conference tilt.

First, the game was never close, UND came out and scored in the first minute of the first period and dominated the Golden Griffins all game long. While the Fighting Hawks looked a bit rusty at times, the Golden Griffins had no answer for the home team’s speed. UND exerted their will against Canisius.

Goaltenders were Fabulous in Game One

Last night, UND junior goalie Cam Johnson took over where he left off last season. The All-American stopped all 17 shots that he faced and became the first UND goalie to record a shutout in the season opener since 2012 when former UND goalie Clarke Saunders shutout the Alaska-Anchorage Seawolves 5-0 in the Brice Alaska Goal Rush.

Also, we need to give credit where credit is due. Last night’s game could have been even more lopsided. However, Golden Griffins starting goalie Simon Hofley played very well. The sophomore from Ottawa, Ontario, stopped 29-of-35 shots.

Breaking it down further, in the second period alone, Hofley stopped 15-of-18 shots taken from the slot (if my math is correct). Many of these shots were of the difficult variety, but the young goalie stood his ground. Hofley is a sound positional goalie that doesn’t have a lot of wasted movement.

Games Against Canisius Haven’t Been Close

Coming into this series, I didn’t know what to expect. How good were the Golden Griffins going to be? The last time the UND played Canisius, sophomore forward Brock Boeser was seven. So, no one on this team had played against the Golden Griffins.

Last season, the CBS Line gave opposing goalies fits and helped lead UND to a national title. That line produced many highlight reel goals. Fast forward to this season, two-thirds of that line is gone. Drake Caggiula graduated and Nick Schmaltz left early, both players are in the National Hockey League trying to make their team’s opening day roster. Only one member of the famed CBS Line remains.

Last week against Manitoba, the Fighting Hawks coaching staff rolled out a newly reconstituted line comprised of sophomore forward Brock Boeser, Shane Gersich, and Tyson Jost. Last night, in their official debut, they were impressive scoring three goals and eight points, there were also a plus-10.