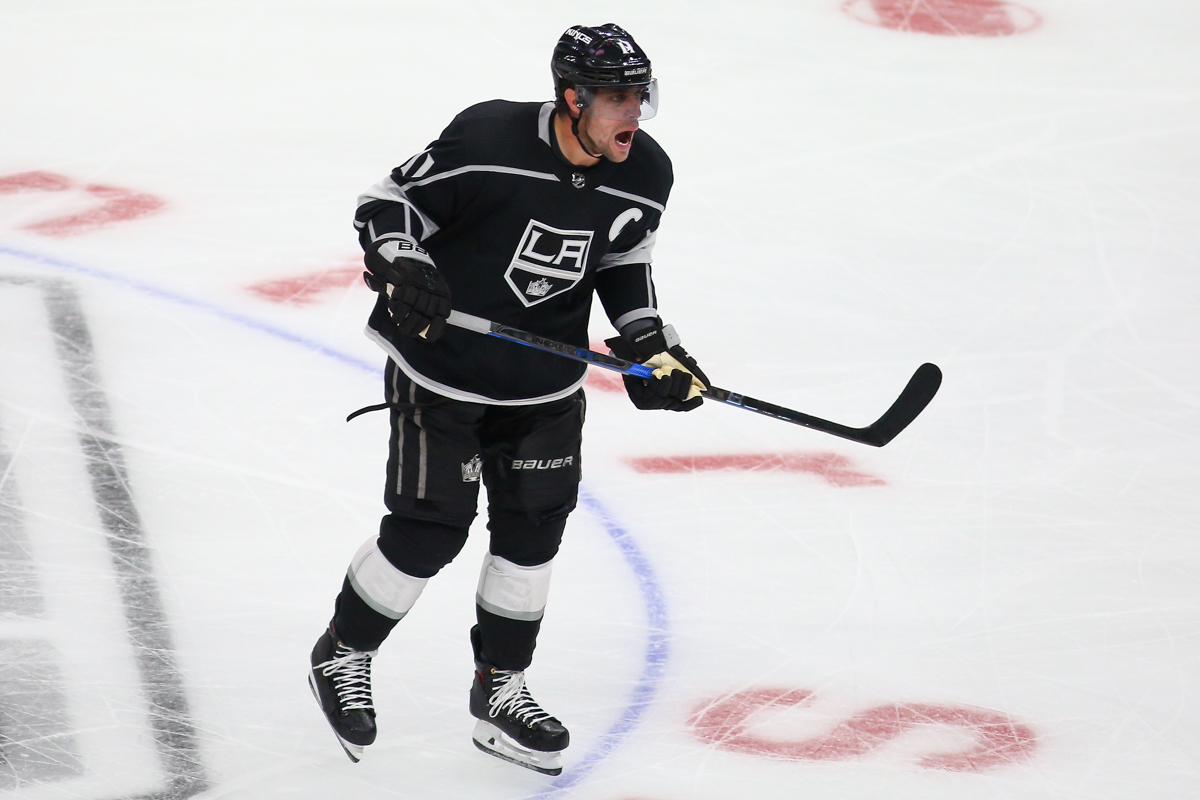 And then there was one. Point to go to 1000, that is. Anze Kopitar is the player in question, and he entered Monday night at 997. He got 998 on the Kings’ first goal versus the Coyotes in Arizona. He then added an assist on a goal by Alex Iafallo to make it 999. Would the precious thousandth appear on this evening? It mattered more than the other, obvious question: would the Kings hold on to their 3-2 lead to keep pace with St. Louis in the slim hopes a playoff spot would be theirs?

Because the Kings knew by the end of the second period that the Blues had won versus the Ducks, in St. Louis. That meant that they held fourth place with the Kings 11 points behind. At this point, the LA team had seven games to go, including the one they were mired in. The Missouri team had six. Yeah, it was nearly an impossible “ask,” but mathematically alive is alive nonetheless. But oh, wouldn’t it be nice to see Kopitar reach his milestone?

Or he could wait until Wednesday, still in the desert. Or the weekend. At least then some small number of Kings fans could see it live, since the team is playing to much dimished crowds, but at Staples Center.

Speaking of seeing it live, I don’t know if it was Kopitar’s first point or his first goal, but I saw that live. It was in Anaheim, and Kopitar zoomed down the right side and crossed past Chris Pronger, beating him to the net to score. If he hadn’t had an assist prior to that  goal (and I  don’t remember if he  did), that was 999 points ago. Our youth ago. OK, his youth ago and my middle age. Don’t be so picky—the question is the same—where did the time go?

So the Kings were up 3-2, and it was period three. Arizona actually had quite a bit riding on the game. They were fifth in the West, the Honda West, with four games to go, including the results of this one. They were in fifth, with 50 points—in other words, they were neck-and-neck with the Kings, if you consider games in hand. Win all three that the Kings had, and they’d be knotted with Arizona at 50, chasing St. Louis.

The best chance of the third period belonged to LA. Kempe on the left side. He fired a puck off the far post. The Coyotes didn’t come all that close even with their goalie pulled with approximately two minutes to go. At one point, they had a scramble in front turn into a scoring chance, but it was saved by Petersen and then cleared. That’s kind of the story  of the night for the  Phoenix-based team. Chances denied.

On the LA side, Adrian Kempe played with Kopitar and Brown on the first line, displacing Iafallo, and he said after that he’s been watching them play for a long while, so he had an idea what to do to complement the line. He set up Kopitar for his goal.

The Kings had 25 shots on goal, bettered by the Coyotes with 34. They lost the faceoff battle, but each team was one-for-two on the PP. For the Corsi-inclined, the Kings got 12 blocked shots to the Coyotes’ one. Yes, one.

After the game, Alec iafallo, who scored after Kopitar put a puck back to Doughty which the defenseman directed on net, said of Kopitar: “It’s incredible to even be out there with him.  .  . . It’s just an honor to be able to play with him.”

One Arizona reporter called the playoffs “all but gone” in his post-game question to Lawson Crouse of the Coyotes. Nobody on the Kings’ side has dared breathe the “it’s over” yet.

In place of that, Coach McLellan said, “We didn’t need to say too much [about the weekend’s loss in Anaheim.] We had a real good response tonight. Everybody played  good to a man, which gave us  some confidence.  Quick made some saves early, and I thought that [second period] was as good period as we’d played in a long time.” Zooming ahead, “In the third period we got some saves and held on.” He said Kempe had played a good game, “aggressive all over the rink.”

Jonathan Quick was hurt and did not play period three. Cal Petersen stepped in. That, of course, brought up conversation of the “EBUG” (emergency back-up goaltender), who would go in should Petersen not be able to continue. Scott Darling, where are you  when we need you?

Brian Kennedy has written or edited ten books, many on hockey. He is a member of the  Professional Hockey Writers Association and covers the Kings and Ducks with NHL Media credentials.