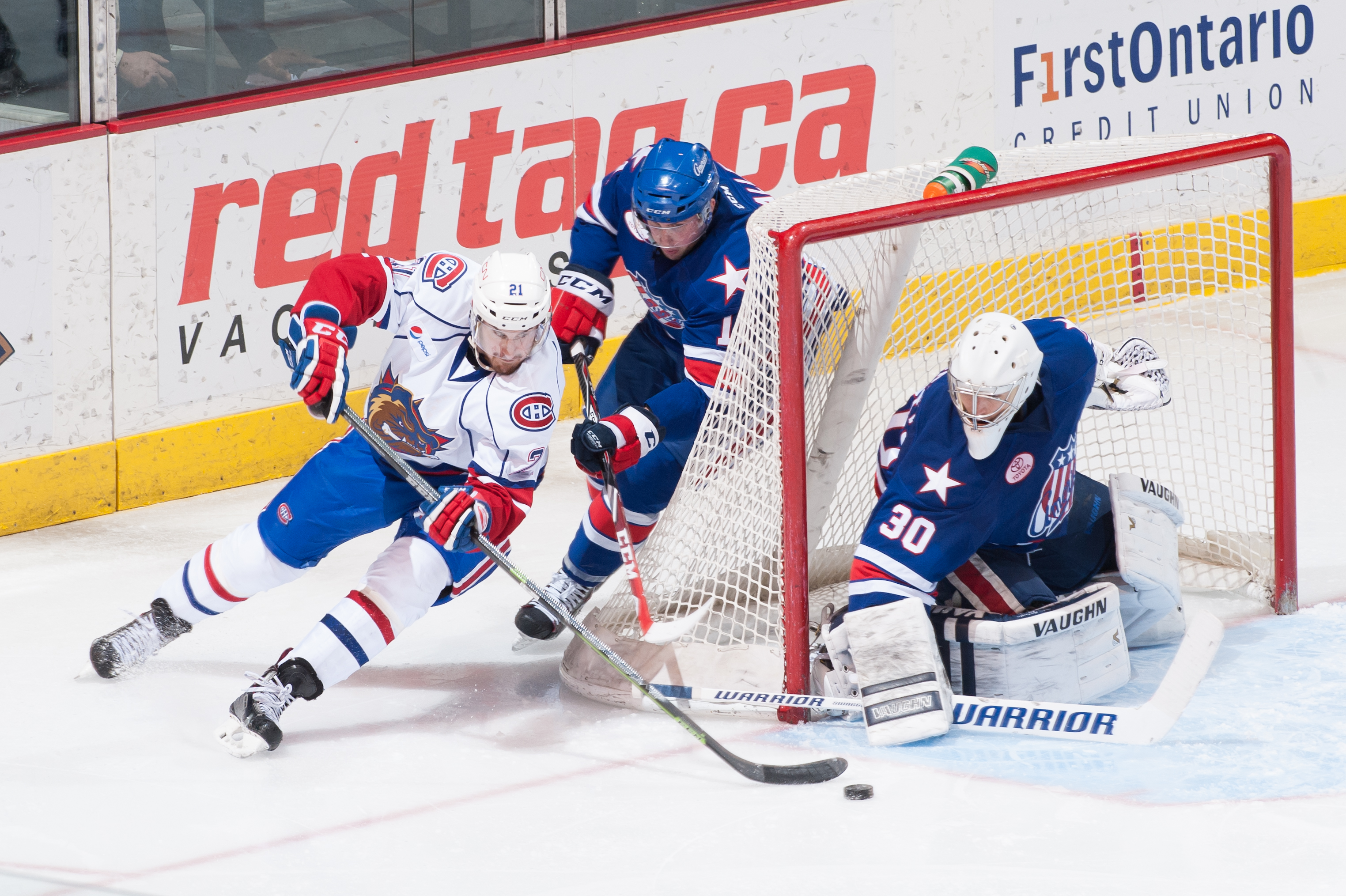 The Hamilton Bulldogs continue their success of late with a 4-1 win over the Rochester Americans Wednesday night.

This win is the ‘Dogs eighth in 10 games and was the seventh meeting between these two teams. Hamilton leads the season series 5-2.

The beginning of the first period was pretty even between the two teams. Each team generated some scoring opportunities, but neither could find the back of the net.

The first penalty of the game went to Hamilton’s Connor Crisp at 12:10. Joey MacDonald had to be sharp during the penalty kill. He stopped both an initial Rochester shot from the point and the rebound on the doorstep with a big pad save keeping the game scoreless.

Sven Andrighetto got the ‘Dogs on the board first at 17:55. Charles Hudon rushed the zone and sent a nifty pass to Andrighetto in the high slot who ripped home his 12th of the season putting the team up 1-0.

Hudon, Andrighetto and Carr, a newly formed top line for the ‘Dogs, has 10 combined points in their last two games.

The ‘Dogs started the second period with energy and speed and just 25 seconds into the period Nick Sorkin buried his seventh of the season. A sweet pass from captain Gabriel Dumont sprung Sorkin to get in behind the Rochester defense and then slid the puck behind the goalie.

After Hamilton had a long shift hemmed in their own zone, Brayden Irwin potted his 11th of the season pulling Rochester within one.

The ‘Dogs made sure to not let any momentum shift to the Americans and almost right after the Rochester goal, TJ Hensick scored his 14th of the season on the power play. Drayson Bowman and Darren Dietz both recorded assists on the goal.

The final frame saw 12 shots from the Americans as they were trying anything and everything to climb back into the game. Hamilton’s Joey MacDonald made a couple huge saves to bail out his teammates and shut down Rochester’s hopes at a comeback.

Jake Dowell’s shot from the defensive zone into Rochester’s empty net sealed the deal and the Bulldogs came out on top 4-1.

Hamilton’s goalie Joey MacDonald made 32 saves in the victory and now has an 8-8-3 record, 2.92 goals-against average and a .903 save percentage.

The ‘Dogs head on a road trip to Grand Rapids for a back-to-back against the Griffins this Friday and Saturday. Puck drop on Friday is 7 p.m.