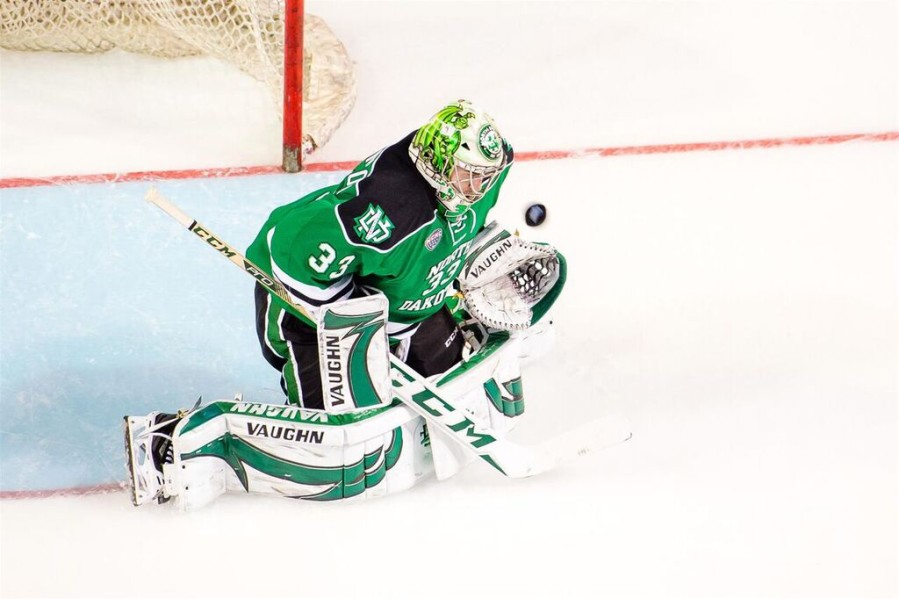 Minneapolis, MN – During their first two visits to the National Collegiate Hockey Conference Frozen Faceoff, the University of North Dakota has compiled a 1-3 record. Enter the Frozen Faceoff, UND was looking to improve that record.

This season, Fighting Hawks head coach Brad Berry said that his team has a list of accomplishments they wanted to accomplish. One of those accomplishments was winning an NCHC playoff championship.

Unfortunately, that goal will have to wait for another year after losing 4-2 to the Minnesota-Duluth Bulldogs in the semi-finals.

The game started well for the Fighting Hawks. They took a one-goal lead into the locker room after one period of play.

Fighting Hawks defenseman Troy Stecher would close the gap with a goal from the point making it 3-2. Unfortunately, that’s all the closer UND would get. Toninato would ice the game with a goal at the 14:02 mark of the third period.

“I thought it was a great hockey game,” coach Sandelin said. “It was exactly what we expected. Very similar how we played the two games in Grand Forks –  very competitive. We didn’t have a great start. I thought we were a little tentative early. They capitalized. Our guys, kind of what like they’ve doing the last month or so, kept their composure and kept playing.”

Even with the loss, coach Berry thought his team had a good start to the game.

“I thought we started the right way,” coach Berry said. “We got an early goal. We got momentum right away and they came back and had a good push back there. I thought it was two good teams playing playoff hockey tonight. I thought it was a hard heavy game. That’s the way it’s going to be from here.”

Moral victories don’t sit well with the UND fans in March, and you can bet that the fan base isn’t happy with the loss. That being said, you have to tip your hats to the Bulldogs, they came in having to win to extend their season. In the end, the Bulldogs play an almost flawless game.

There is one concern on the UND fans mind:  with the loss tonight, UND has lost its fourth game one in a row in the conference tourney. That four-game losing streak includes UND’s last year in the WCHA and the last three seasons in NCHC.

“I hate to lose. HATE to lose. But if you have a group that you believe in…we’ll be fine.” — Brad Berry. pic.twitter.com/bWOelFDqsq

Leading the way for the Bulldogs: Dominic Toninato (2g-0a—2pts) and Alex Iafallo (1g-1a—2pts). Bulldogs goalie Kasimir Kaskisuo was solid in net stopping 22 of 24 shots. Some of the saves were of the difficult variety.

While UND has won back-to-back Penrose Trophies, the NCHC tournament championship has been their Kryptonite. They’ve never made it to the championship game. The loss really isn’t that costly for UND. On the other side of the ice, the Bulldogs needed to keep winning to advance to the NCAA tourney.

Not All is Lost

Not all is lost. While UND hasn’t played for  a conference title game in the Frozen Faceoff yet, they’ve still advanced to the Frozen Four the last two seasons. That’s the ultimate goal for this year’s Fighting Hawks team and they’ve been focused on that goal all season long.

After the game, UND head coach Brad Berry said that he wasn’t  concerned about this team.

“We’re in a good spot right now,” Berry said. “It’s one game. I told our guys that it’s one game. Obviously, you want to win that game. We’re playing against a very good team. Every night in the NCHC we face the same thing time in and time out. It made our team battle tested and ready for this time of year. I feel very confident in our group. We’re going to have a good game tomorrow night.”

UND doesn’t want to go into the national tourney on a two-game losing streak. To break the skid in the conference tourney UND needs to come to the rink prepared, ready to go and on top of their game.

“(We need to) come prepared,” Stecher said. “There’re no secrets anymore. Every team is playing at the top of their game. Tighten up defensively. It’s a game of chances now. There’s something on the line tomorrow.

“We obviously, we want to head into the tourney on a winning note. We’ve got to understand if we lose a game next week our season is done. Tomorrow is an opportunity to rebound and build heading into the regionals.”