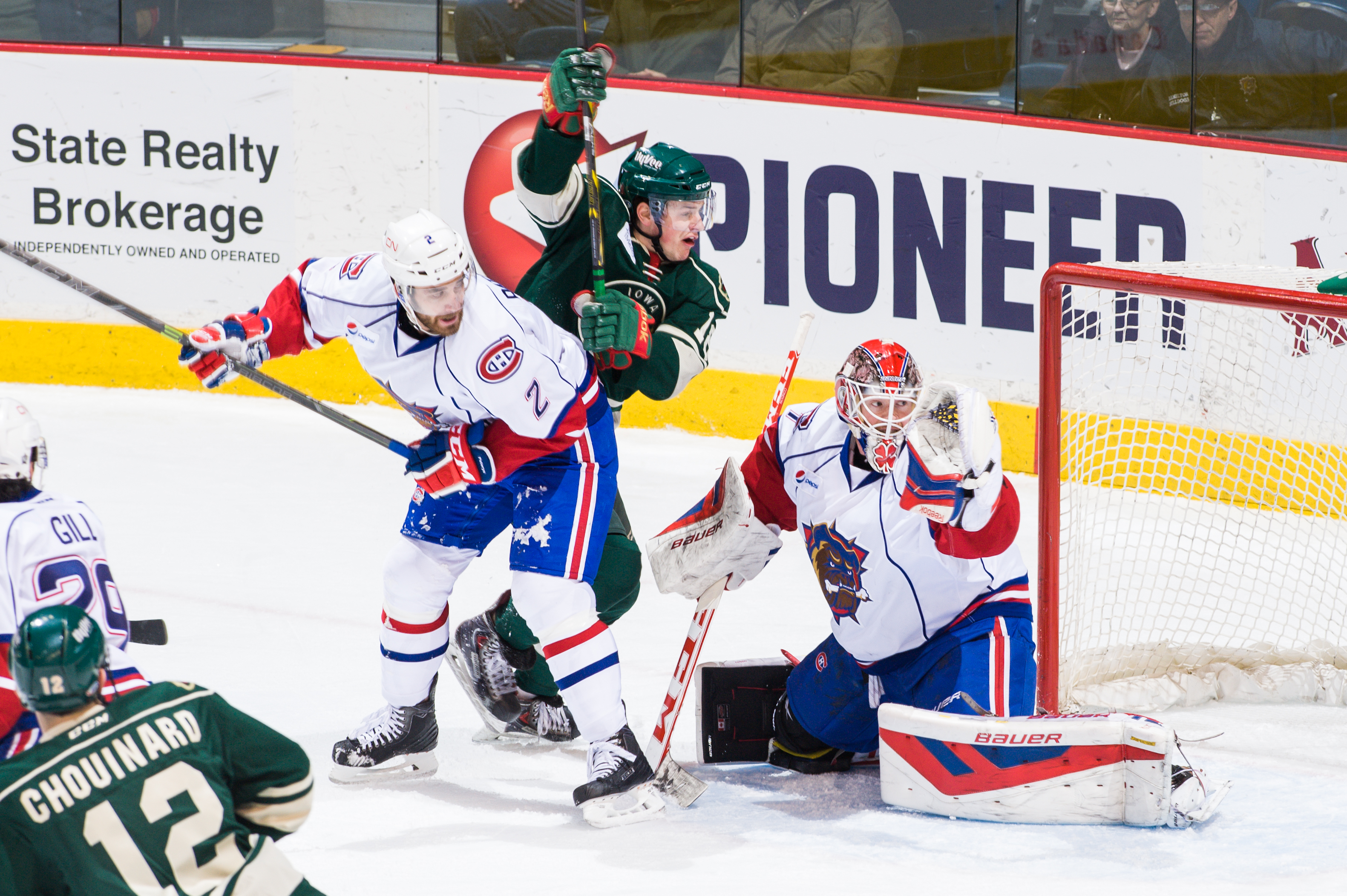 The Hamilton Bulldogs came from behind to beat the Iowa Wild 2-1 on Tuesday night at FirstOntario Centre.

In his first game back after a three-game stint with the Montreal Canadiens, Hamilton’s captain Gabriel Dumont was the only goal scorer for his team, netting both goals.

This was the fourth and final meeting between these two clubs with Hamilton taking the series 3-1. All four tilts were just 12 days apart.

The score after the first period was zero but there was no shortage of scoring chances at both ends of the ice. Hamilton’s Daniel Carr, who was looking to extend his scoring streak, had a few good chances including a wrap around attempt at an open net. Carr has four goals in his past two games.

Hamilton’s only power play of the period saw quick puck movement leading to a couple great scoring opportunities including one from TJ Hensick who barely missed a wide-open net.

The Bulldogs began the game using their physicality to knock the Wild off the puck creating many turnovers and rushes into the Iowa zone. They seemed to have lost momentum during the first intermission and in the second period they came out flat. Iowa took advantage of Hamilton’s slow start and wasted no time in getting on the score sheet when Michael Keranen scored at 1:03 of the second.

It wasn’t until Dumont tipped a shot point shot from Shane Bakker at 14:40 that the Bulldogs evened up the score.

In the third, Hamilton had three opportunities to take advantage of Iowa’s worst penalty kill in the league, but could not capitalize. Iowa’s penalty killers kept Hamilton to the outside and the score stayed 2-1.

Despite Iowa’s efforts to tie the game, Dumont scored his second goal at 13:01 putting the ‘Dogs up 2-1. Trying desperately to get the equalizer, Iowa pulled their goalie, John Curry, with just a few minutes left to add the extra attacker. Dumont had a chance to bury an empty netter, and get the hat trick, but an Iowa defenseman made an unbelievable kick save to keep the score 2-1.

In the dying seconds of the third period Hamilton’s goaltender Mike Condon made a big toe save and held on for the win. Condon made 24 saves in the victory. Condon has been impressive of late, with a 1.99 goals-against average and a .935 save percentage. He also has three shutouts in his last 10 starts.

Hamilton has won eight of its last nine games and looks to continue their success on Friday, February 13th against the Toronto Marlies at FirstOntario Centre. It’s the Bulldog’s Pink in the Rink night in support of the Juravinski Cancer Centre.