BU Scrapes By Northeastern in Overtime

The Quarterfinals of the Hockey East Tournament got underway from Agganis Arena and crosstown rivals Boston University and Northeastern did not disappoint. They battled their way to another overtime classic in the Hockey East and entertained the fans gathered on Commonwealth Avenue. Ultimately, BU made enough plays to win and took a 1-0 lead in the best of three quarterfinals series.

The game did not start well for BU, though. The Terriers hadn’t seen the ice in 2 weeks and it showed. BU was rusty and struggled to keep up with the nation’s best scorer, Northeastern’s Zach Aston-Reese. Early on in the first, Northeastern was buzzing and Aston-Reese netted his 31st goal of the season to put his team up 1-0. 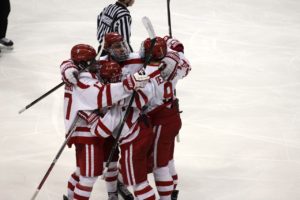 Two minutes later, Dylan Sikura was the beneficiary of excellent passing from Eric Williams and Jeremy Davies, putting the puck by Jake Oettinger to put the Huskies up 2-0 before the ten-minute mark. The game looked like it could get away from the Terriers early, with Northeastern peppering Oettinger with more shots. Fortunately for BU, Oettinger made 14 saves and did not allow another Northeastern puck to get by him.

BU started to get in rhythm late in the first, and their momentum increased in the second. The Terriers then capitalized on a Northeastern mistake. At the 7:29 mark, Garret Cockerill was called for tripping. Four seconds later, Dante Fabbro netted a shot from the blue line to get BU on the scoreboard and cut into the lead. BU would get another chance on the power play when Northeastern had too many men on the ice with just over two minutes to play, but the Terriers could not draw even in the second.

After getting on the board, Oettinger continued to shut down the Huskies, making saves on every shot he faced in the second and third periods, and BU put more pressure on Ryan Ruck. Eventually, BU found their opening. Chase Phelps took a pass from Patrick Curry, got to the top of the crease, and tied the game near the halfway point of the 3rd period.

With the score 2-2, Northeastern had some chances on the power play to reclaim their lead. With eight minutes left, Chad Krys was called for hooking. With less than five minutes left, Dante Fabbro was called for holding. Not only did Northeastern not score, they did not get a single shot on net on either of their power play chances. BU could not get anything by Ruck in the waning moments of regulation, so for the second time this year, BU and Northeastern would play overtime.

Overtime started evenly, with both teams skating well and getting some shots away. A hooking penalty against Jeremy Davies gave BU the scoring chance they needed. BU got two shots on Ruck before Northeastern cleared the puck. Chad Krys forced the puck back into the attacking zone with Northeastern in the middle of a line change. The puck found its way to Jordan Greenway on the rush and the 6-5 sophomore ended the game with a wrister to make it 3-2.

Northeastern’s Jim Madigan did not think highly of his team’s power play. The Huskies went 0-4 on the advantage and only got four shots in those chances. Three of them came on one power play in the first period, clearly Northeastern’s best period. BU’s David Quinn praised his team’s mental toughness and fortitude, especially on special teams. The same two teams will faceoff again tomorrow at Agganis Arena in game two of the Quarterfinals. Puck drops at 7:00 PM.