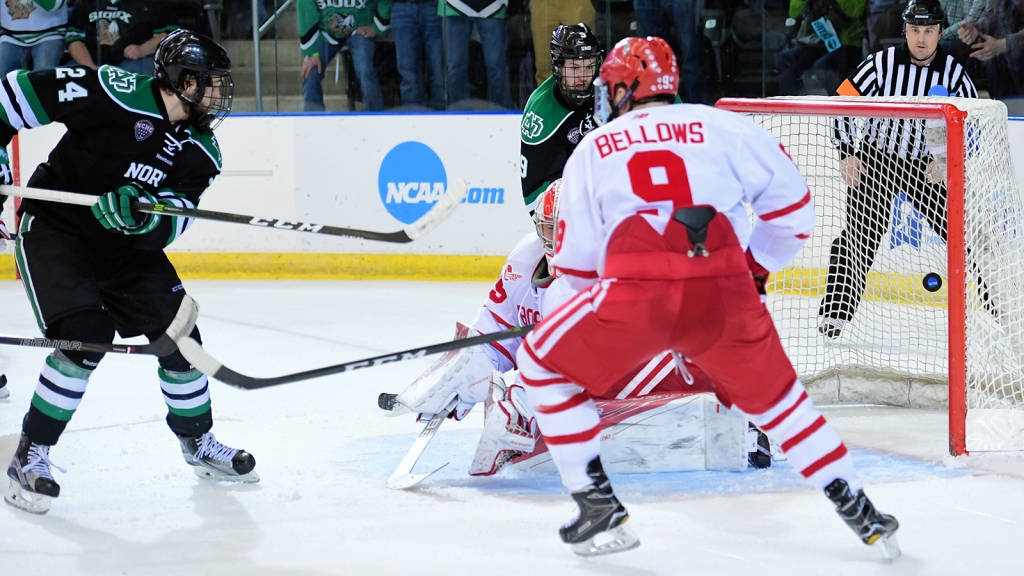 On Friday afternoon, that’s what happened. The third-seeded University of North Dakota gave high-flying Boston University all they could handle, but in the end, the Terriers advanced to the West Regional Championship game with a 4-3 double overtime win.

After taking a 1-0 lead into the first intermission with a goal from Rhett Gardner. The Terriers would score the game-tying goal at the 02:05 mark of the second period with a goal from defenseman Doyle Somerby.

In the third period, Bobo Carpenter, and Jakob Forsbacka Karlsson would give the Terriers a 3-1 lead. Just when it looked like the Terriers were going to put the game away, the Fighting Hawks started taking the game to the Terriers.

How lopsided were the shots? The Hawks outshot the Terriers 36-14 in the second and third periods. For the game, it wasn’t even close. UND outshot BU 59-29. Breaking it down further, UND attempted 145 shots on net, BU blocked 51 of them. Terriers junior defenseman Brandon Hickey blocked 17 shots himself (that’s one shot less than the UND hockey team combined) and he probably needed an ice bag after the game.

About halfway through the third period, Hawks forward Mike Gornall checked Terriers forward Kieffer Bellows hard into the glass, in the Terriers end, causing it to shatter into hundreds of pieces. After a 14-minute delay to fix the glass, and to clean up the pieces of jagged glass, UND went to work. The delay seemed to benefit the Fighting Hawks

At the 12:14 mark of the third period, UND’s Ludwig Hoff scored his fourth goal of the season. Fighting Hawks sophomore defenseman Christian Wolanin tied the game 03:20 later. The two-goal deficit was erased.

Then Wolanin did this. pic.twitter.com/hVZ0ngJbuK

“When the glass broke we were brought in as a team by coach and coach said it’s going to be one of the best comebacks in college history and we did that, we just didn’t, tough way to end it,” Wolanin said. “We battled we did everything we could through a whirlwind of emotions in a big game, just didn’t end the way we wanted it to.”

The game would proceed to overtime and the Fighting Hawks thought they had won the game with a goal from freshman forward Dixon Bowen. But hold the phone, UND’s Hoff was offside. After a lengthy video review, the goal was waved off. So, the two teams played on.

“We thought that it might be an offside and it seemed like the longer it took (to review) the better chance that we were going to live another day,” Terriers head coach David Quinn said.” When the linesman buckled his helmet coming out of the box, we knew that we were going to get another chance.”

“We only had one view of it, in between the intermission before we had to go out for the other overtime, we looked at it, it was tough,” Berry said. “To me, it was probably the right call. We didn’t have a clear definitive view because on the box side, Hoff went into the zone and you can’t see from our side. But they took time to look at it, and there are very credible people making the call and they made the right call.”

“As is the case in all NCAA Tournament games, all goals are automatically reviewed, including the legal entry into the offensive zone. In real time, the on-ice officials knew the play at the blue line was in question. After reviewing multiple angles, the crew deemed that there was conclusive video evidence showing that North Dakota’s Ludvig Hoff was in the offensive zone prior to the puck crossing the blue line. Therefore, the goal was overturned.”

This season, it seemed like the Fighting Hawks found a way to snatch defeat from the jaws of victory. Last weekend, they lost the championship game on a goal off of a defenseman’s skate in front of their net. This weekend, they lost a game in overtime after they thought they’d scored the game-winning goal. Things don’t always go your way in hockey.

“We played really, really well through the second half of the season when our lives were on the line and our backs against the wall we battled and showed what our team’s made of and it’s the game of hockey, that’s the way it goes sometimes,” Wolanin said. “I know there’s not a single guy in that locker room that doesn’t think they gave everything they had and like I said that’s the way it goes sometimes.”

The future looks very bright for the young Hawks. Depending on who they lose to the NHL, they could be back at the top of the NCHC standings next season. UND finishes the season 21-16-3.

With the win, BU improves to 24-11-3 and will play in the championship game of the West Region championship.