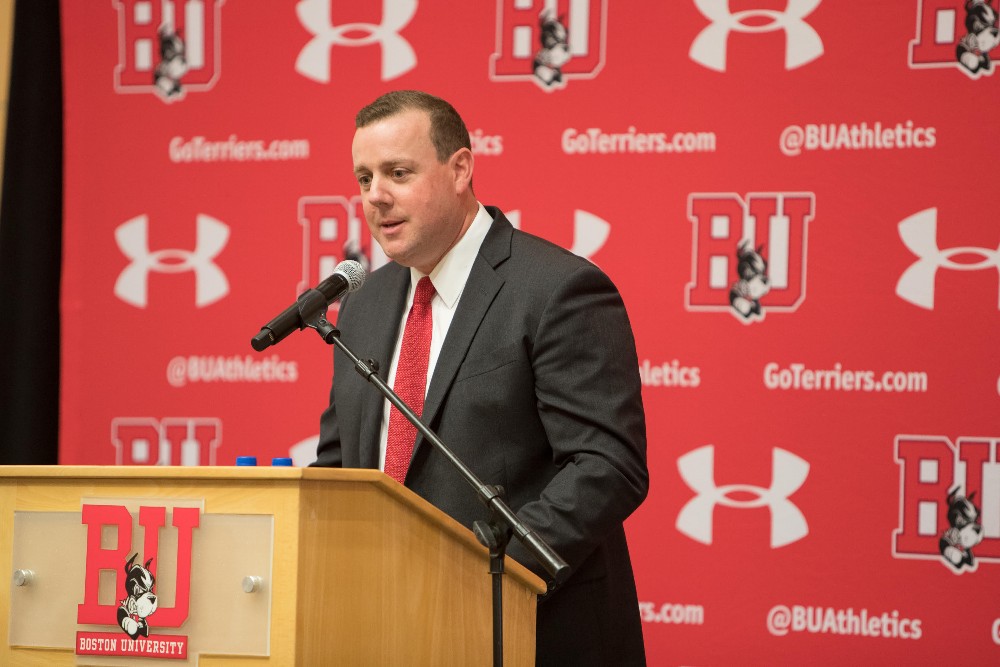 Boston, MA — On May 19th, David Quinn shocked the hockey world by announcing his departure from Boston University and hiring by the New York Rangers to be their head coach. Almost immediately, BU started a whirlwind hiring process that included input from all corners of the hockey. Athletic Director Drew Marrochello explained that everyone from Jack Parker to Scotty Bowman contributed opinions to the process. Joe Sacco, Shawn McEachern, and Union Head Coach Rick Bennett were all considered for the position. Ultimately, Marchello and the Terriers settled on the first man they interviewed, Albie O’Connell, and introduced him on Wednesday afternoon.

O’Connell is the epitome of a Boston Rink Rat. The 42-year-old Watertown, MA, native grew up wanting to attend a Beanpot school. He attended St. Sebastian school and hailed from a predominantly Boston College family, but was convinced to attend rival BU by Jack Parker and Blaise MacDonald. The pitch from Parker was simple:

“I don’t know where you’re gonna fit in,” O’Connell said. “You’ll have to work for everything you get.”

O’Connell was won by the challenge and opportunity to compete, and played for the Terriers from 1995 until 1999, and wore Jack Parker’s uniform number, 6, for his playing days. In his time at Walter Brown Arena, O’Connell helped the Terriers to three straight Hockey East Regular Season titles, the 1997 Hockey East Tournament crown, four consecutive Beanpots, two Frozen Fours, and the 1997 National Championship game.

O’Connell was drafted by the New York Islanders with the 116th pick of the 1994 NHL Draft, ahead of notable names like Marty Turco and Daniel Alfredsson. O’Connell himself poked fun at his selection.

“Probably a bad pick,” O’Connell said. “I played a little bit in the minors. I was just ok. It was a very short pro career.”

He only played four years in the minors, bouncing between the ECHL and the British National League. After retiring as a player, O’Connell took up a coaching job at Division III Colby College, where he learned about coaching from Jim Tortorella. After one year, O’Connell moved to Division I, assisting at Niagra University and Holy Cross. He almost left coaching completely for a more lucrative business before Mark Dennehy offered a job as an assistant coach at Merrimack in 2007. He spent one year in North Andover before moving to Northeastern and then to Harvard, where he helped Ted Donato lay the foundation for the Crimson’s recent renaissance.

In 2014, David Quinn offered O’Connell a job as BU’s assistant coach, and he took it. Since then, O’Connell has helped the Terriers to four consecutive NCAA Tournament bids, a Beanpot in 2015, two Hockey East Tournament Titles, and the 2015 Frozen Four.

When the Head Coach job came available, O’Connell was the first man considered because of his knack for recruiting talented players. Clayton Keller, Shane Bowers, and Jake Oettinger are just a few players who were at least partly recruited to the Terriers by O’Connell’s work. His approach to recruiting is simple:

“You choose schools based on relationships,” O’Connell said. “We try to give guys a clear picture of where they fit in and what their potential ceiling is. We’ve got a competitive bunch here. And we want guys who will compete every day for a spot in the lineup. ”

He had been interviewed for other Head Coach jobs in the past, but this is his first time as a head coach in any program and any level of the sport.

Terrier fans will miss David Quinn’s suave demeanor and quick wit. But O’Connell has no plans to change the program’s structure.

“I think it’ll be a seamless transition,” O’Connell said. “If you have the same house with the same foundation and you have to paint the walls, one guy might pick red, white, and blue, and the other will pick red and white. We’ll do things systematically the same. We’ll continue to get guys to do things at a high level.”

O’Connell sports a subtle Boston accent and a hardnosed demeanor to the sport. Terrier fans will take to him easily.

This closest situation to this is probably North Dakota’s transition from Dave Hakstol to Brad Berry. After a run of success with the  North Dakota, Hakstol left in 2015 to coach the Philadelphia Flyers. Brad Berry was named the head coach after serving under Hakstol as the lead Assistant for three years. In his first year, Berry led UND to an NCHC championship and a National Championship in 2016. O’Connell has the potential to accomplish a similar feat in 2019. With Bobo Carpenter, Dante Fabbro, and Jake Oettinger leading the returning players, BU should be a favorite for the Hockey East Crown. Only time will tell if O’Connell lives up to the standard set by Jack Kelley, Jack Parker, and David Quinn.