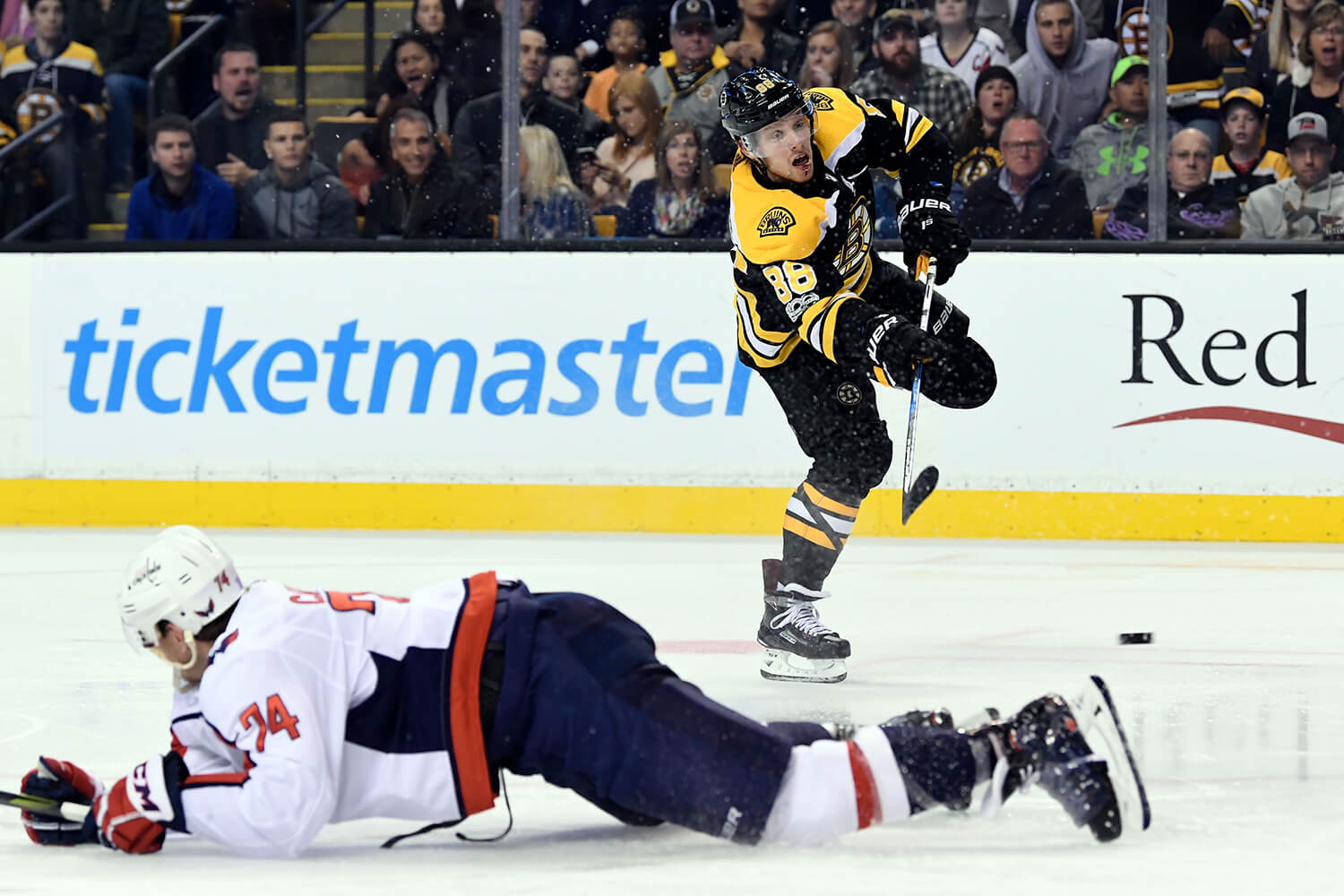 BOSTON, MA – The Boston Bruins took a commanding three games to one series lead on the strength of a solid, total, team effort 4-1 win over the Washington Capitals at TD Garden. Three Bruins scorers notched their first postseason goals as Boston rode that offensive output to the series’ first multiple-goal win for either team.

The Bruins controlled the opening period despite being penalized twice in the first six minutes of play. A Too Many Men on the Ice call just forty-nine seconds into the game gave the Capitals the early advantage, but they managed only two shots on goal. On their second power play at 5:51, the Capitals were held without a shot on goal by the Bruins penalty kill units.

Boston put 11 shots on Ilya Samsonov (33 saves) during the first 20 minutes. The best chance came on the power play when Charlie Coyle hit the post as the period was winding down. That power play, courtesy of Capitals forward Michael Raffl’s penalty, carried over from the last thirty-six seconds of the first into the opening 1:24 of the second period. The Bruins were unable to convert on the man advantage.

Washington forward Tom Wilson hit the crossbar early in the second as the Raffl penalty had expired.

Capitals defenseman Dmitry Orlov hit Bruins defenseman Kevan Miller inside the Capitals zone, drawing a four-minute penalty for Roughing. In contrast, Coyle drew a two-minute Roughing call of his own for going after the Russian defender for his hit on Miller at 7:27. Miller left the game and was transported to the hospital to undergo concussion testing. Orlov’s hit was late; he left his feet and appeared to catch Miller’s head with the initial contact.

Boston took advantage of the call when Brad Marchand tipped David Pastrnak‘s blast from the right face-off dot past Samsonov for the 1-0 Bruins lead. Charlie McAvoy was credited with the secondary assist on Marchand’s third postseason goal.

The two teams traded power-play opportunities twice in the second half of the middle frame, but neither club could take advantage of the five-on-four action.

Boston carried an Anthony Mantha Interference call into the first 1:45 of the third period. Pastrnak would give the Bruins the first two-goal lead of the series for either team when he fired a wrist shot past Samsonov just twenty-nine seconds into the third. McAvoy and David Krejci collected the helpers on Pastrnak’s first goal of the playoffs.

Coyle would extend that lead to 3-1 at 1:03 when he banged in a Jake DeBrusk rebound. DeBrusk had a breakaway bid deflected by Samsonov, but Coyle was there to knock in the loose puck as it took a funny bounce off the end board back out in front of the Capitals goal.

Washington would pull one back, with Boston’s Marchand off for Interference, when Alex Ovechkin‘s broken stick slapshot caromed off Brandon Carlo‘s skate and past Tuukka Rask (19 saves) to make it 3-1 at 4:54. Ovechkin’s power-play goal was his second goal of the series. John Carlson and Nicklas Backstrom assisted.

Capitals forward Mantha picked up his second penalty of the game at 13:31, and Matt Grzelcyk made the Caps pay when he one-timed a McAvoy pass past Samsonov at 14:50. The goal was Grzelcyk’s first of the 2021 postseason. McAvoy finished the night with a career-high three assists. Taylor Hall also picked up an assist on the Grzelcyk goal.

“It’s kind of fun to watch him grow up right in front of our eyes,” said Grzelcyk about his defensive partner and former college teammate McAvoy. “He’s one of the best defensemen in the league.”

Boston outshot the Capitals 37-20 in earning the 3-1 series lead. With the win, Rask moves into first place on the Bruins all-time playoff win leader board with 54 career playoff victories. He passes Bruins legend Gerry Cheevers in the process.

“All facets were solid,” said Bruins Head Coach Bruce Cassidy. “A lot of good stuff defensively, offensively on the power play, and enough five-on-five. I thought we stuck to trying to play down low, create some stuff one-on-one around the net. We stuck with it.”

The teams will face off in Washington DC on Sunday at 7:00 pm for Game Five.