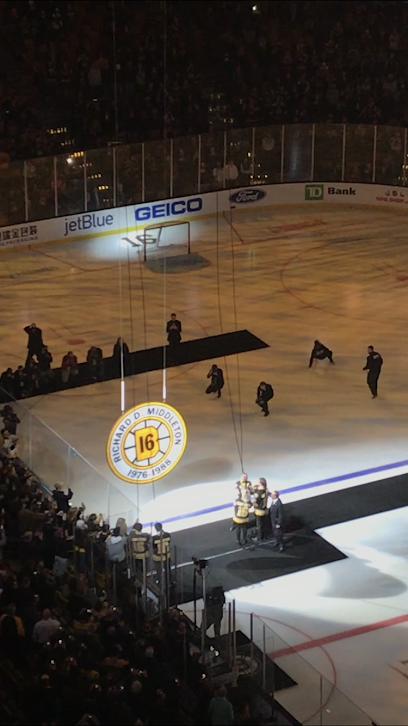 Bruins Raise Number 16 To The Rafters

The Boston Bruins retired their 11th number in club history on Thursday evening when they raised Rick “Nifty” Middleton’s number 16 to the rafters. Middleton played 12 seasons with the Bruins from 1976-1988. In the 881 games he played donning the black and gold sweater he amassed 402 goals and 496 assists for 898 points. He is third all-time in Bruins history in goals, sixth all-time in assists and he ranks fourth on the Bruins all-time scoring list, behind Ray Bourque (1,506), Johnny Bucyk (1,339), and Phil Esposito (1,012).

The night started with a highlight real of some of Middleton’s greatest goals, assists, and dazzling puck handling skills which earned him his nickname. Then, the master of ceremonies for the retirement ceremony, former Bruins left winger and current NESN color commentator Andy Brickley spoke of Middleton’s accomplishments. He then introduced four of the living players who have their numbers retired, Terry O’Reilly, Bruins President Cam Neely, and the aforementioned Bourque and Bucyk.

After a thunderous round of applause from the Causeway crowd, a humble Middleton took to the podium.

“The day it was announced Ray [Bourque] had the best line when he called me up to congratulate me. He simply said ‘Welcome to the club.’ And what a club it is! I’m so proud to be included amongst the select group of great Boston Bruins players and to be one of only eleven Bruins to have his number retired in almost a hundred years. What makes it even more special is that I played with 5 of the 10 players that are already up there.”

Middleton continued to state that as he prepared his speech for tonight, he reflected on all the years he played the wonderful game of hockey and realized that if he can just keep his legs moving another year, come 2020, he’ll be entering his eighth decade of playing hockey. He went on to thank his dad for building a rink in the backyard of their Toronto home and for creating his love affair with the sport and his mom and grandmother for always going to the games and cheering him on.

“I firmly believe,” Middleton, said heartfelt, “that over the years, I was very fortunate to have the three most important ingredients that any hockey player needs to be successful; great parents, great coaches, and great teammates.”

While introducing his former coach and snazzy dresser, Don Cherry, Middleton joked that he didn’t invite more of his former teammates to the ceremony so they could avoid a too many men on the ice penalty. This reference, to a 1979 Game 7 Stanley Cup semifinal game against the Montreal Canadiens (a game Middleton played in and Cherry coached), resulted in a hearty laugh from everyone in attendance.

Cherry, never one to shy away from voicing his opinion, returned the joke with a jab of his own. Regarding Middleton not being a two-way player early in his career, Cherry joked, “He went this way [meaning offensively] but didn’t go this way [the Bruins defensive zone]. We had to introduce him to our goalie again at the end of the season!”

“It really is hard to put into words,” Middleton said on what this night means to him. “I’ve had four months to think about it, and I hate repeating myself, but honestly, I believe it is the biggest honor that certainly a retired athlete can get in his career…”

To add to the pageantry of the night, the Bruins would skate to a 2 to 1 shootout win against the New York islanders. All in all, it was a pretty nifty night for number 16 and all in attendance.