Sitting back and watching the Stanley Cup playoffs with the absence of the Boston Bruins is odd, for a lack of a better word. No one is saying that they would have won their first-round matchup against the Washington Capitals, but playoff hockey with your hometown team as one of the participants is a spectacle in and of itself regardless of the duration of their time spent playing those all-important games.

This has occurred for the second consecutive year, and management should not allow supporters of the team to get comfortable with the complacency of the organization.

This summer will be extremely crucial to the success of Cam Neely as president of the team and Don Sweeney as general manager. The decision was made to bring back head coach Claude Julien for another year behind the bench. Whether that was the right move or not is a completely different debate all together, but now the changes should be made to the roster.

Correction: changes NEED to be made to the roster.

It should come to the surprise of no one—from the die-hard fan to the causal pink hat—that the Achilles heel for the Bruins during the 2015-16 season was the defense. Torey Krug and Kevan Miller are both free agents in some capacity, so look for one of them to seek a contract that will leave the other player on the outside looking in. Assuming that the Bruins are running out of patience with the development of their young blue liners (Zach Trotman, Joe Morrow, Colin Miller), the B’s will need to make a trade or two to bring in at least one top-pairing defenseman. The reason for this is because the free agent class for defensemen is less than stellar this coming offseason. 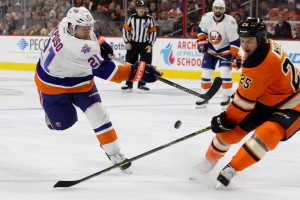 With that being said, the B’s have the opportunity to target a couple of elite forwards in the free agency pool if they choose to go that route. The decision might be taken out of their hands, as it is reported that the team and Loui Eriksson are not close to a new contract. It can be safe to assume that Eriksson will leave for another team this summer. Longevity, contending team, and (of course) money will be huge factors for the pending unrestricted free agent.

Neely went on record saying that the Black and Gold would love to bolster the right-wing position this summer. With Eriksson gone, that need should catapult right to the top of the list. One potential fit for the Bruins is New York Islanders winger Kyle Okposo.

The former first-round draft pick recorded 22 goals and 42 assists for 64 points during the regular season. He is also in the final year of the five year/$14 million contract with the Islanders. Similar to Eriksson, Okposo made $4.5 million in the final year of the deal. If you compare the production for the 2015-16 campaign, Eriksson had a slightly better year from a goal scoring perspective. He posted 30 goals and 33 assists for 63 points in 82 games for the Bruins. The one caveat? Okposo and his Islanders are still playing postseason hockey.

Even though the playoff production has been there for the 28-year-old Minnesota native (one goal and six assists through eight games), Okposo will need to take some more pressure off the back of John Tavares and prove that he can be a player who can thrive in a lead role.

When the Islanders season does come to an end, Okposo will likely be heading to a new team this offseason due to the Islanders having cap concerns. It has been rumored that the Minnesota Wild are highly interested in their home-grown talent, but the Bruins should make a push to sign this guy.

It is tough to gauge just what he will command on the open market, but you have the think that Eriksson will strike a richer deal. If the B’s are willing to let Eriksson hit free agency where he will receive an offer that the Bruins deem too unreasonable, than all the power to them. The Swedish forward was reportedly requesting a deal that would pay him around $6 million per year over six years. The Bruins were looking to give him a deal that would only extend about three or four years. Since he is 30 years old and has a history of concussions, the Bruins would be wise to avoid putting an offer like that on the table.

Okposo will not command that much money, at least we think that will be the case. Even if Boston comes at him with a four-year deal worth $20 million, that could be enticing enough for him to consider. He would be a great fit next to Patrice Bergeron and Brad Marchand with his physical nature and his goal-scoring ability.

Most importantly, he already wears the number 21. Just switch the names out and everything will be good to go.

Ignoring the sarcastic undertone of that previous statement, Okposo would look great in a Bruins sweater. A splash is needed for this team, and this player could be one of the options.