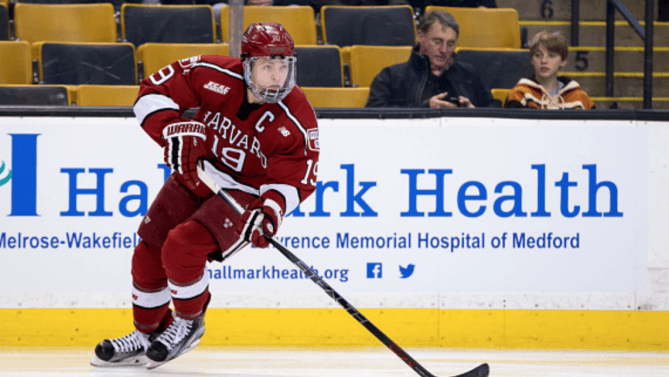 Bruins Miss Out on Vesey, Still Not Improved

At the end of the 2015-2016 season, the Boston Bruins had the opportunity to overturn their roster after missing the post season for the second straight year. After buying out Dennis Seidenberg, it appeared they may have been on their way to an overhaul, or at least a direction.

Yet, after missing out on former Hobey Baker award winner Jimmy Vesey, the Bruins appear as directionless as they did at the start of May. Vesey, a free agent forward out of Harvard, officially signed with the New york Rangers on Friday. Vesey had expressed that he would not sign with his draft team, the Nashville Predators, and was traded to Buffalo before he became a free agent.

Other than essentially replacing Loui Eriksson with David Backes, the Bruins will go into 2016-2017 with the same set of players. They re-signed Kevan Miller and brought back fellow defenders Joe Morrow and Colin Miller. The forward core remains the same, save for Denver University winger Danton Heinen who could make the roster.

The forward class, after the top two lines, drops dramatically. Adding Backes ensures depth at center, but with Jimmy Hayes projected to be a third line winger, they don’t have much room for error on the fourth line. Noel Acciari and Riley Nash should be locks, with players such as Austin Czarnik also getting looks.

The defense remains in the same predicament, aging and ailing with Miller, Adam McQuaid, Zdeno Chara, and John-Michael Liles, along with Torey Krug. Despite losing Seidenberg, no real upgrade was made on the blueline.

While teams like the Sabres, Rangers, and Florida Panthers have continued to load up talent, the Bruins have been stuck with their current roster and haven’t progressed. All the way back to draft night when Boston missed out on trades for Dmtry Kulikov and Keith Yandle, the Bruins have failed to make moves to improve their team.

All the way back to when the Bruins failed to replace traded defensemen Johnny Boychuk and Dougie Hamilton, the Bruins have not upgraded any position or replaced any talent they lost. After trading Milan Lucic, they did add Matt Beleskey, but the entire offense did not see a boost, and they didn’t add any other forwards to the equation.

Heading into the season less than two months away, the Bruins are in the same position they were in at the end of last year. Missing out on Vesey did not make or break the club, but it is just another showing of being unable to make an impactful move for improvement, and it could be a third straight playoff-less season in Boston.