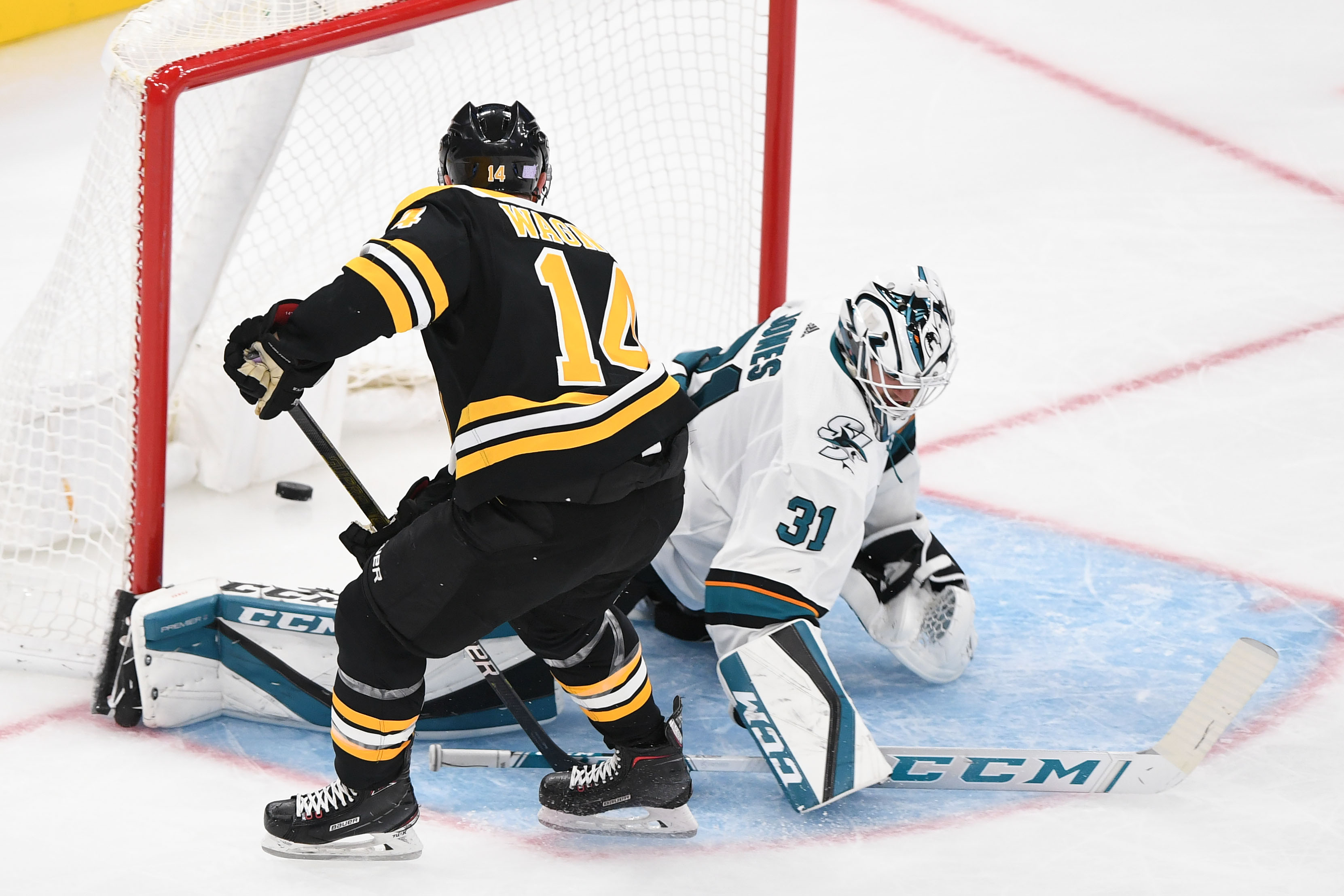 Boston, MA – The San Jose Sharks (4-7-1) entered the TD Garden on the tail end of their five-game East Coast road trip, that was evident early and often. The Sharks have been struggling of late, going 1-3-1 over their last five games. Injuries, age, and deep playoff runs have done a number on Peter DeBoer’s squad, but those weren’t the only reasons for tonight’s loss. The Bruins had a big say in how the Sharks would finish their trip.

The Bruins carried play from the opening puck drop, one that featured former Bruin Joe Thornton battling local boy Charlie Coyle. San Jose was called for icing, forcing the five on ice to stay out. That led to a Barclay Goodrow Tripping penalty at 6:15. Coming into the night, the Sharks had the number one penalty kill in the NHL, while the Bruins possessed the number two power play.

It didn’t take long for the league’s hottest player, David Pastrnak to light the lamp. At 7:49 Patrice Bergeron faked a shot and got Logan Couture to slide, then he dished to Pastrnak, who one-timed the puck past Martin Jones for the 1-0 lead. DeBoer challenged that there was offsides on the play but the call on the ice stood. The Sharks were assessed a Delay of Game penalty at this time, giving the Bruins yet another chance on the man advantage. Lukas Radil served it. San Jose had a shorthanded bid by Evander Kane and Tomas Hertl that Tuukka Rask turned aside. Back down the other end the Bruins had a three on one chance that Pastrnak, Jake DeBrusk, and Brad Marchand couldn’t convert on.

Boston’s Matt Grzelcyk was called for Holding at 9:20. San Jose had two good scoring opportunities but Rask continued his solid play. At 16:25 Sharks center Hertl was sent off for High-Sticking. Again Boston made San Jose pay. Marchand and Krug set up David Krejci for another one-timer from the left face-off dot at 17:51. Boston outshot San Jose 16-6 for the period. The Sharks were 0-5-0 when trailing after the first period, while the Bruins were 6-1-1 when leading after one.

The second started off with Krejci getting sent off for Hooking just fifty-two seconds in. Brent Burns seemed to breathe new life into the Sharks at 1:31 when his snapshot at the top of the left circle beat Rask blocker side, cutting the deficit to 2-1.

However, a Tripping call on Hertl at 3:09 put the Bruins right back on the offensive. Steady pressure on Jones and the Sharks would result in Krejci setting up Coyle at the top of the crease with a shot-pass just after the power play expired. All Coyle had to do was bank the puck into the net. 3-1 Bruins at 5:21.

A bad pass at the Bruins blue line by San Jose defenseman Tim Heed led to David Backes chipping the puck to Chris Wagner for a mini breakaway. Wagner slid the puck through Jones’ legs on the back-hand making it 4-1 Bruins.

At 9:36 Radil was called for Tripping. The Bruins had tremendous pressure but Jones stood on his head for this power play. McAvoy fed Coyle with a nifty pass down low but Jones stonewalled him with his pads.

Defenseman Brandon Carlo capped the scoring in this one when he flicked a shot on goal from the blue-line that arched up and over the scrum in front of Jones and into the Sharks net at 16:50. The second period ended with Boston outshooting San Jose 18-6 (33-12 overall).

The third period turned into a penalty-fest as San Jose was called for 11 penalties and Boston was whistled for eight. The play had turned chippy early when Kane was called for High-Sticking on McAvoy at 1:08. Chara took exception to that and went after Kane, but Brenden Dillon stepped in. Chara and Dillon were assessed matching Roughing penalties. Just minutes later, Radil was called for High-Sticking, prompting Chara to go for Kane again. The two have a history, Chara pummeled Kane in February of last season.

Fisticuffs finally flew when Brett Ritchie and Goodrow squared off along the boards by the penalty boxes. Ritchie got the better of Goodrow. It looked as if Marchand and Couture were about to mix it up as well at 13:25 but that was merely a protracted hug. Each were sent off for Roughing, and given Game Misconducts.

The tally on this one was Boston 5, San Jose 1. The Bruins outshot the Sharks 41-17 while San Jose was called for 16 total penalties to the Bruins 10. The mood in the Sharks dressing room was one of dejection and frustration.

“We’re definitely going through a tough time right now,” said Couture. “It was a tough road trip, not the way we wanted it to be. We get to go home now. We’re home for a lot of November.” The captain deflected criticism of his coach and put the onus on the team. “It think it’s a lot of individual play, not many passes are on, not breaking out clean, not winning battles in the defensive zone or offensive zone, and we seem scared to make plays in the offensive zone. We’re always making the safe play.”

“I think our hearts are in the right place,” said DeBoer. “We’re a little fragile right now, you can see that. We have to help ourselves out there too at the end of a road trip, when you take eight minor penalties, five in the first two periods, against the best power play in the league. So I think we have to be smarter in helping ourselves. I don’t question that our hearts are in the right place or not. We’ve got guys here, over my four years here, that have gone deep in the playoffs, to a Stanley Cup Final, they are warriors. I would never question their effort.”

For his part, Bruins coach Bruce Cassidy was pleased with his teams performance. “Both power play groups were really sharp,” said Cassidy. “The fourth line pitches in with a big goal. Different guys were contributing. Probably the minutes were as balanced as well as any game. I thought we defended well in front of Tuukka (Rask), which we’ve typically done but each game gets better.”

San Jose returns home to the SAP Center where they will host the Winnipeg Jets on Friday at 10:30 EST. The Bruins are off until Saturday when the take on the Ottawa Senators at TD Garden at 7:00 pm.